This is an article featured in ‘Deccan Chronicle dated 24 April 2011. It’s very interesting and damn impressive too. Being a part of bikers’ community, I felt it was my responsibility to share it with you all as well. ‘While the long-distance biking community romanticize the notion, ‘It’s the rider, not the bike’, reality hints it’s both. 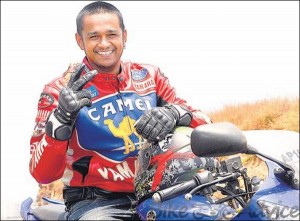 Hyderabadi professional biker Vinu S.V has proven the same by becoming the first person from the state to successfully pull of an Iron Butt Challenge. The feat that requires a biker to clock a distance of 1,610 documented kilometres (1,000 miles) with in 24 hours was attempted by many from AP in the past but Vinu became the only one who could accomplish the feat.

The 25-year-old biker, who quit his well-paying Deloitte job in September 2010 to follow his passion, recalls how he decided to take the Iron Butt Challenge. “Two months back, while riding in Kerala, I covered a distance of 1,300 km in a little above 16 hours. Then, I thought I could attempt this challenge.

No one from AP had accomplished the ‘Saddle Sore’ feat and I wanted to be the first, so I started preparations.” And the preparations were not the usual cardio and bike servicing. “I started jogging and did weight training two months before the ride. I later moved to cycling to strengthen the lower half of my body.

I also did the logistics like finding out which petrol bunks on the route were open round the clock and had card swiping facility to document the journey.” On 17 April, Vinu left the city on his Yamaha R15 to make history. “To obtain a certificate from the Iron Butt Association (IBA) in US, I needed to keep fill fuel by swiping my card and keep the electronic bills that would have details like the places I stopped to fill, and the time.

I left Hyderabad on Sunday night at 9.06 pm, reached Hosur via Bengaluru and rode to Namakkal via Salem. I took a U-turn at Namakkal and returned to Hyderabad the same route. I clocked 1,715 km within 22 hours and 47 minutes. To do this, I didn’t stop to eat anywhere to save time.

I ate my two snicker bars and mixed sachets of Gatorade with water and drank it while riding because my average speed would be hit badly if I’d pulled over. I’ve sent my bills and odometer photos to IBA and they informed this week that I’m entitled to a certificate,” says an ecstatic Vinu. So, where does the biker plan to tread next? “I have my eyes set on two more challenges.

A Burn Burner challenge where in I have ride 2,500 km in 36 hours and the K2K challenge. A friend from Delhi entered the Limca Book of World Records when he rode from India’s Northern most part, Khardungla, to Kanyakumari (K2K) in a record four days and four hours.”

While Vinu has won himself laurels, back home, his parents do not approve of him earning bread and butter by biking. “They are still not fine with me for opting to become a full-time professional biker as it doesn’t pay as much as a regular 9 to 5 job. But I couldn’t sit in office longing to be on my bike out there either.”

We, at BikeAdvice, as one team wish Vinu a great success for his achievement and for all the fetes he would achieve in the near future. I, as an author of BikeAdvice personally salute Mr.Vinu for his commitment as a biker. Vinu, you made the entire biker community proud!