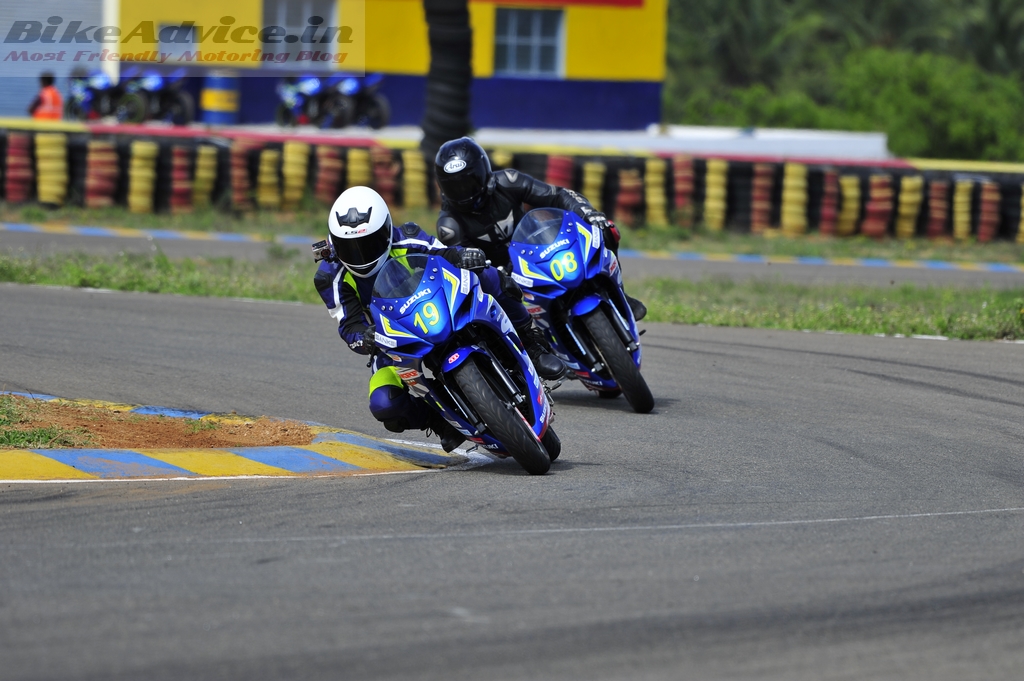 My RD350 mechanic, a racer for the erstwhile Escorts Yamaha in the ‘90s, tells me how people down south were (still are?) always ahead of us North Indians in, well…, everything related to motorcycles. They always made the best expansion chambers, among other stuff, and were generally faster than everyone else. On the road, or on a racetrack. With, or without chambers. I also remember reading about a gentleman, in that part of the country, whose Bullets were faster than the mighty RDs on a track on some occasions! Further highlighting the adamant inertia of everything at RE – a company that, ironically, happens to be manufacturing bikes in that very region of the country, which I feel has some really gifted people when it comes to engineering prowess.

However, keeping legends and folklore aside, one might argue here that “access to racetrack(s)” has been a major factor in not only nurturing race talent in the south, but also in providing a big platform to something I would like to term as the “supplementary race industry” (read: ‘manufacturers/importers/traders of the go-faster bits like turbos, race CDIs, et al’) to test, develop, and market their products better. But again, since most of the fastest Indians – CS Santosh, Rajni Krishnan, Narain Karthikeyan, Karun Chandok – are from around this part of India, that’s simply a big enough reason for me to believe there’s something in the region’s water and air that facilitates infinitely programmable production of testosterone in these individuals. I say programmable because what else can explain the serene calm on their faces before the race, and devastatingly effective aggression while in it? 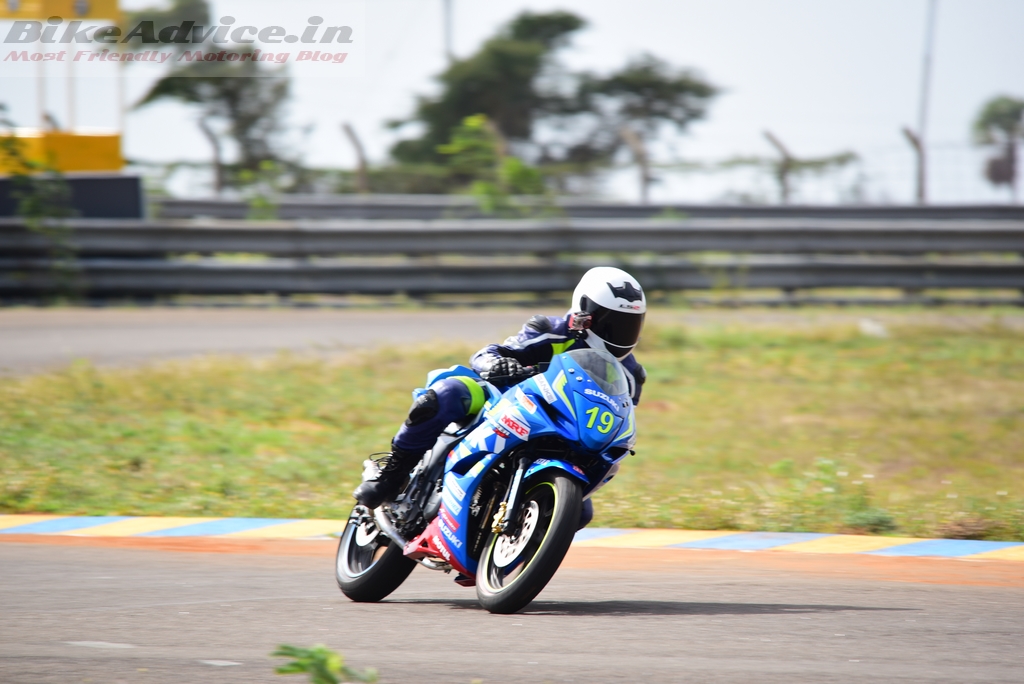 Well, it must be the same thing that explains a gap of four darn seconds between the best lap (1:20:645) by Joseph P. Mathew in the Suzuki Gixxer Cup ‘Novice’ (below 23 years) Class, and that clocked by the fastest (1:24:639) of us in the ‘media fun race’ Suzuki had organized for a few select journos/bloggers last month, before the first race of this year’s Gixxer Cup. And guess what; there was this kid, Aaron Gunawardena, a 13-year old from Sri Lanka (yeah, from even further down south), who still went on to beat Joseph in that very six-lap race by posting an overall time which was less than a second better than Joseph’s! Yes, that’s real racing, people, where it is not at all necessary that the rider with the best lap time would be the fastest overall too. 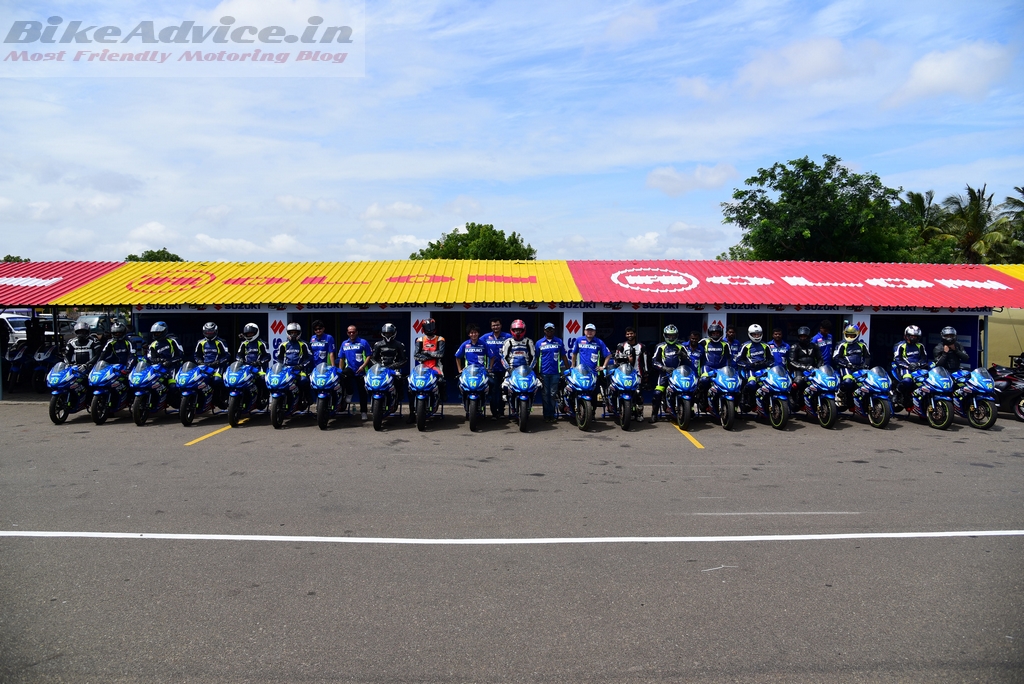 However, our media race was based on lap times, and not on the overall race time. It was an unconventional (but super fun!) race where we were supposed to keep lapping the circuit for 20 minutes and the winners were decided according to the quickest laps posted by everyone. Yes, that means one could amble around the track a few times; take in the sights, sign autographs for the audience, and then put everything into achieving that one blistering lap before returning to the pits to chat up beautiful pit girls, who were ‘inconspicuous’ by their absence this time (there should not be any in future too. Ideally.). But that thought did not strike anyone as most of us were/are track-time deprived souls, so maximum laps around the track happened to be the only thing on our minds. 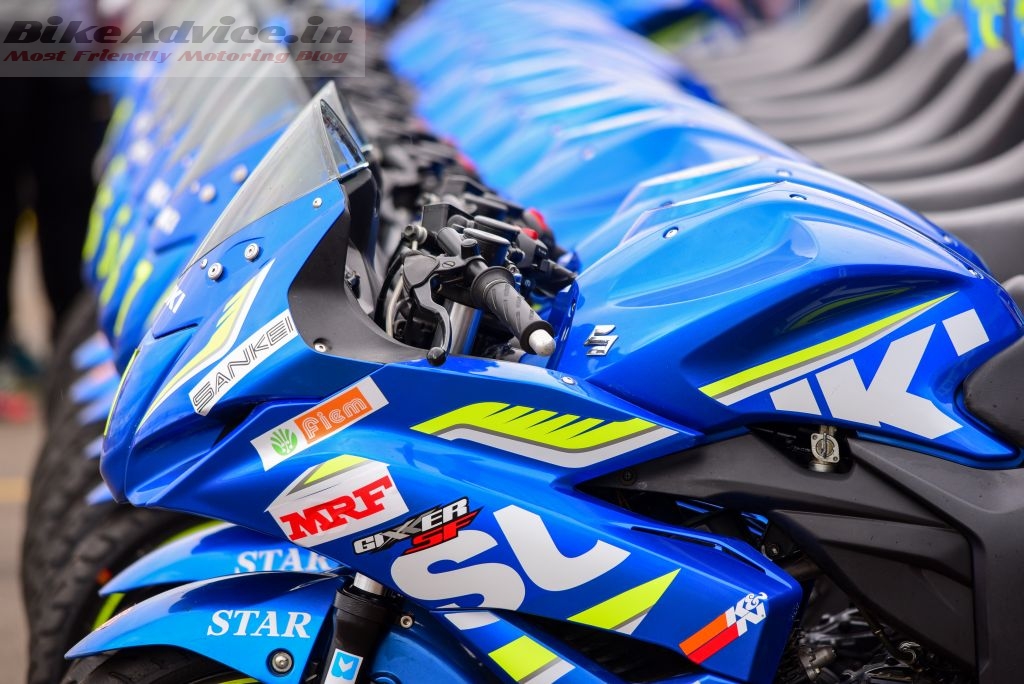 Therefore, while the aforementioned four-second gap (on a 2.1 km racetrack) itself should be more than enough to keep us journos/bloggers humble, the hilarious gap of 12-15 seconds (see below) between our top rider and tail-enders like me (Bike No. 19) almost ends up painting a picture that we must have stopped for photographs, snacks, and that customary phone call to folks back home to let them know our coordinates, etc. 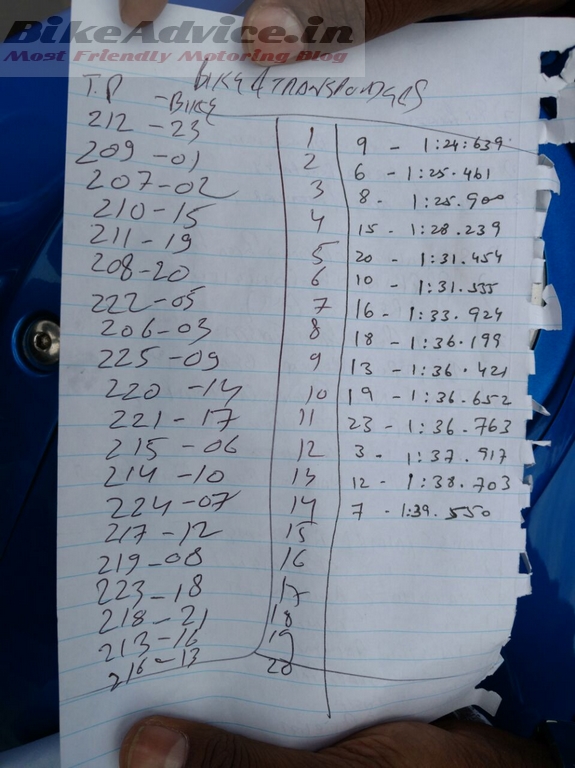 However, in our collective defense, I would just say that while almost everyone from fourth position onwards had little to no experience of track riding, the top three almost live on the tracks. Moreover, while one of them has been a national champ, the other two have received superlative training (perks of being employed with big media houses) from race schools like The CSS, CIA, etc., and it shows. Beautiful lines, awesome pace, sublime fluidity, cunning diplomacy – these guys were in a separate class altogether! It’s a good thing we all saw that as they overtook all riders at least once. Some, maybe twice. 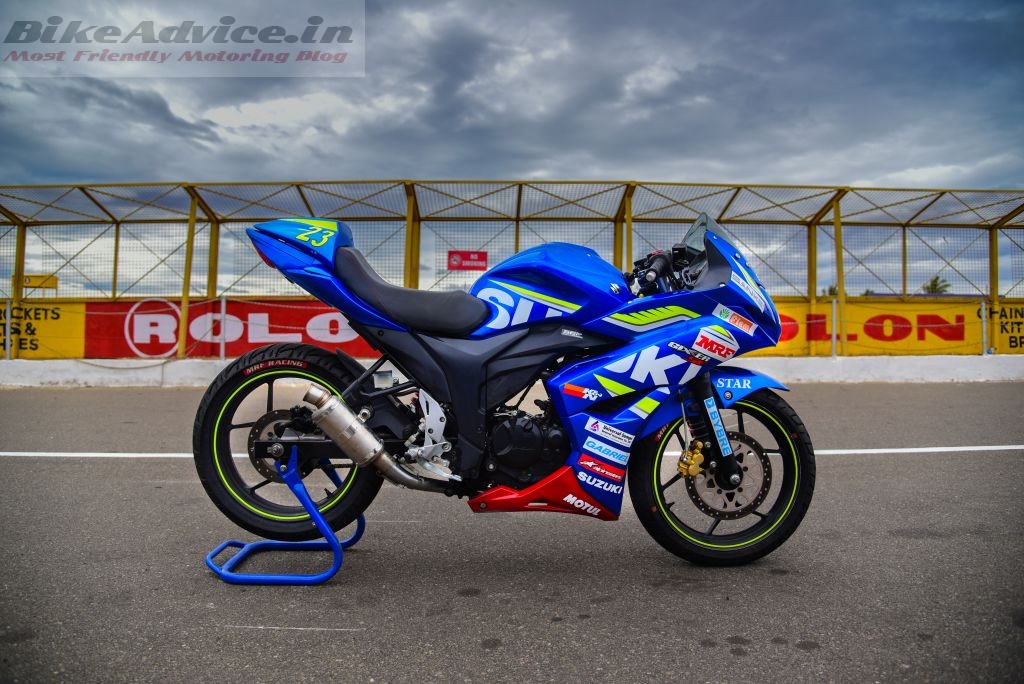 Oh, I almost forgot to mention that we all were riding Suzuki’s race-prepped Gixxer SFs and you can read all about the motorcycle here – Suzuki Race Bike Review. Compared to last year (the debut of the Suzuki Gixxer Cup and the modified SF) the fuelling has improved a lot and, just like the recently introduced rear-disc production variant, the race bike too gets a rear rotor. However, the rear brake is almost redundant on a racetrack; in fact, last year, though it was not a race, the fastest guy had asked the mechanics to do away with the brake pedal completely after bending it in just a few laps! That also brings me to something which might either make you visualize yourself riding at Kari with the aggression of an elbow-dragging Marquez or the clumsiness of Mr. Bean on a motorcycle. Because this track is for people who are inclined towards the right. No, I am not talking about your political slant, but something that might have to do with your dexterity (or the lack of it) or just plain habit. What I mean to say is that all of us, while riding a bike, are more comfortable in either right or left turns, but not in both, unless one is ambidextrous (even then it’s not guaranteed). Therefore, since this racetrack is all about right-handers, and if you are someone like me, who, despite being right-handed is more comfortable in left turns, Kari can be a nightmare for you. 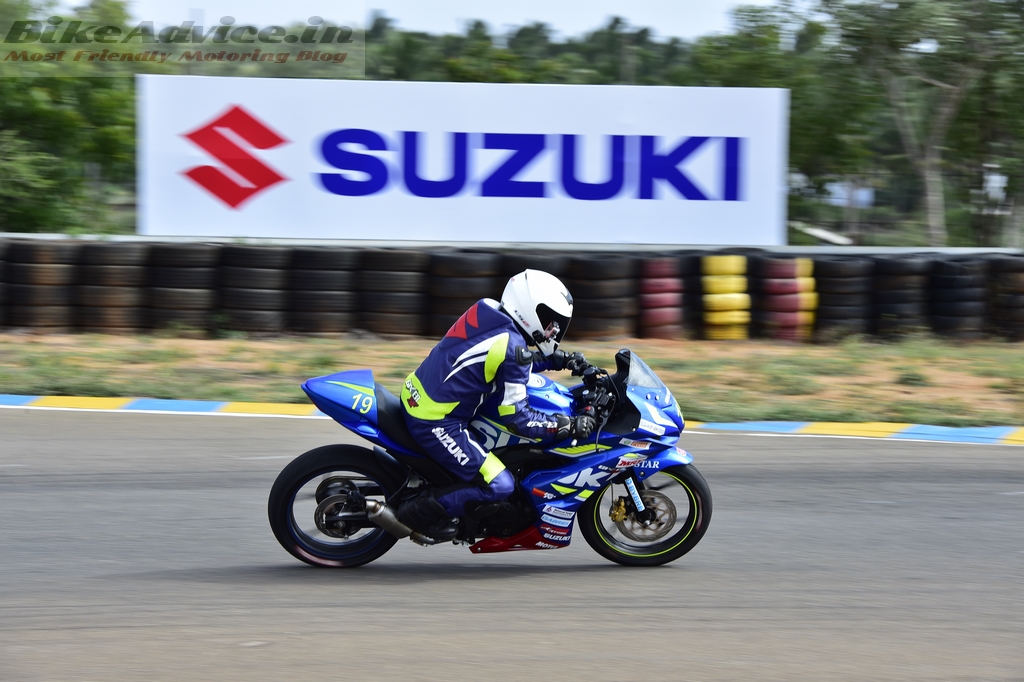 But you don’t have to get disheartened. Instead, use the opportunity to gradually overcome your fear (of tilting the bike to the right). The key word here being ‘gradually’. If you’ll see the videos below you might be able to notice that my pace increases with every lap – the max velocity on the straight increases from 113 km/h to 115 km/h, 116 km/h, and finally 118 km/h. In fact, I was among the only three (if our post-race banter is to be believed) who saw 118 km/h on the speedo (true top speed was a shade over 135 km/h; read our last year’s report to find out why); while most others were in the 109-114 km/h group, including the seasoned racer who came second!

He later on shared that on such a tight track, being fast is secondary; being quick is paramount. From what I understood, he was primarily referring to directional changes, i.e., how quickly you turn the bike into a corner, straighten it up, dive into the next corner, pick it back, and power away. All this while remaining in the right gear, of course. Sounds obvious, but isn’t the easiest thing on the track. Choose the wrong gear and you’ll feel like you’re standing still. The takeaway for me is, “quit smoking; get back to martial arts, and ride even more…”

And these were the practice-laps’ videos that I shared. Our media race day comprised a 20-min practice session and an equal duration race, separated by a 15-min. break, which stretched to half an hour, thanks to most of us utilising the recess in the best manner possible by lapping the circuit on the bigger Suzukis (two ‘Busas, and the GSX-S1000 twins; the GSX-1000R was missing though). I had crashed during the practice session at one of the patches known as the ‘Bermuda’ (they say no one knows why people fall there, but I guess it’s just a matter of low grip on that section…) and though four other riders had also crashed (one at the same spot, twice) none had gotten injured, except me. I had somehow managed to hurt my left ankle and right knee. That was certainly not the sort of knee-down moment I had expected… 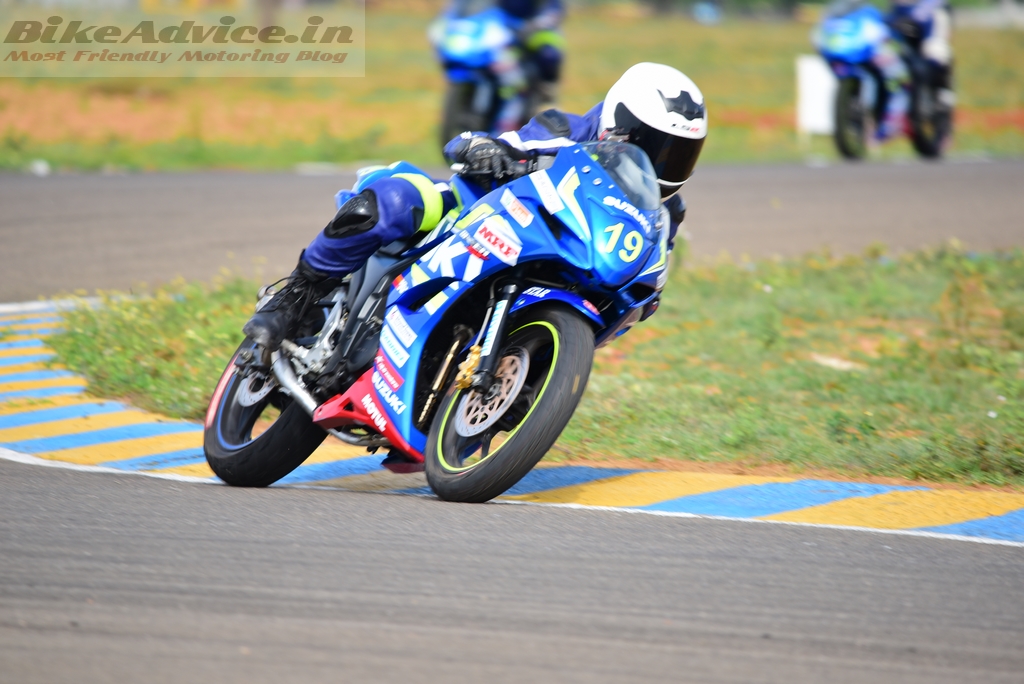 Suzuki India was kind enough to provide full-on, one-piece leather race suits to those of us who haven’t yet been able to invest in their own, and if it wasn’t for the leather, the whole right side of my body would have been peeled off. Imagine Superman flying with only his right arm stretched, but without any distance between his body and mother Earth – that’s how I slid when I crashed. The only logical explanation behind my knee still getting bruised badly is that it was a slightly ill-fitting suit; the armour around the knee must have moved when I fell and slid…

Now, there was a full-fledged ambulance on stand-by and, honestly, a part of me (I guess it was the brain) wanted to check the wounded knee and get it attended to, but the heart said, “screw it, let’s race!” And I was just glad that nothing happened to the bike save for a bent right-side clip-on and brake lever, which the Suzuki’s technical team fixed for me in a jiffy. Just before the race, everyone was asked if they wanted to change the bike (if they were unhappy with the bike’s performance in the practice laps, or even just because of sheer superstition), but no one did, except for one gent who had also crashed in the practice session. As luck would have it, he again crashed during the race but still scored a very respectable fifth place! Brilliant! 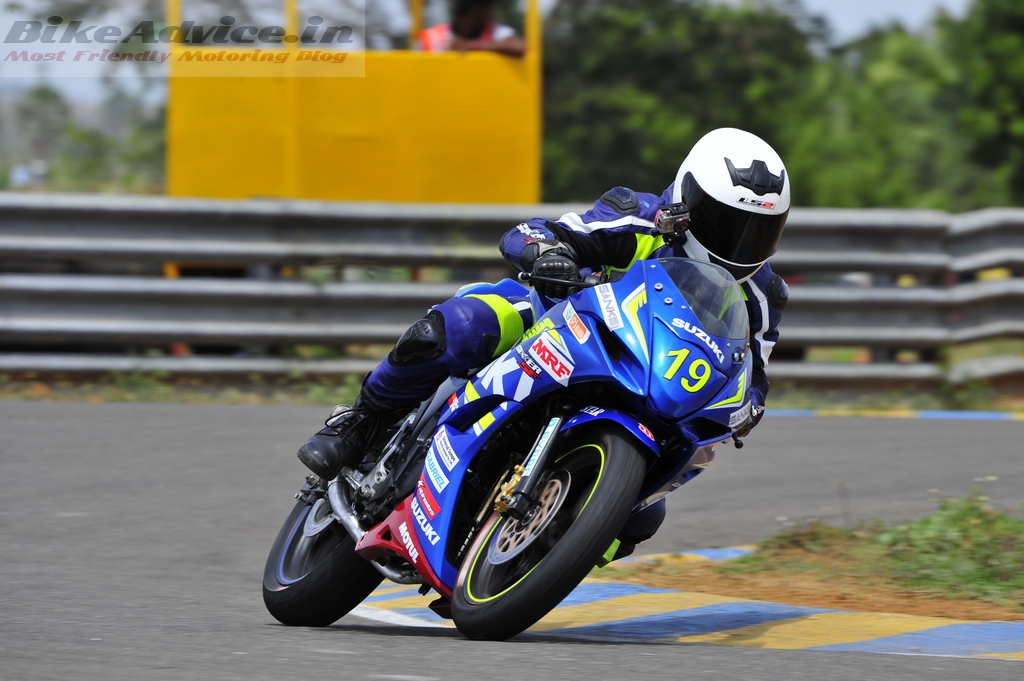 Anyway, my pain, in the aforementioned exceeded break time, was increasing by the minute and I just wanted the race to start. And when it did, I realized that my left riding boot had become tighter – the ankle was now swollen! I was surprised as it hadn’t really pained that much at the time of the crash, (must have been the adrenaline…), but now, every gearshift, every corner, every body movement was sending waves of pain to both legs. But I kept going on, the overflowing adrenaline again trying to alleviate the pain. However, after about thirteen to fourteen minutes in the saddle, I could easily realize that I was becoming slower and, since only the best lap would be accounted for, there was just no point in continuing the masochism any further. I pulled into the pit lane, parked the bike, grabbed the nearest chair, and within a few minutes the red flag was out signalling everyone that the race was over. The results were announced almost as quickly, and I felt almost flabbergasted to learn that I had finished 10th in a group of 14 riders. But, further introspection in the hotel room revealed that I was unnecessarily being too harsh on myself, because, considering that I still raced despite being injured, it would have been okay even if I had finished last…

Here’s a lap from the actual race:

Now, if you think you have it in you, you should definitely register for the next season (2017) of the Suzuki Gixxer Cup. If you are older than 23 years, you can try your luck in the Open Class, and I have already told you about the Novice category. However, if you are someone in 13-17 years’ age group, you may want to register for the next season of Suzuki Red Bull Road to Rookies Cup. Because, if you are really talented, you might become one of the two candidates who will be trained by Suzuki Racing to participate in the Red Bull MotoGP Rookies Cup. And if you win that one too, your journey to Moto3, Moto 2, and eventually to MotoGP might just get expedited. I see that kid from Sri Lanka in the reckoning this year. It might be you next year. So start practising. 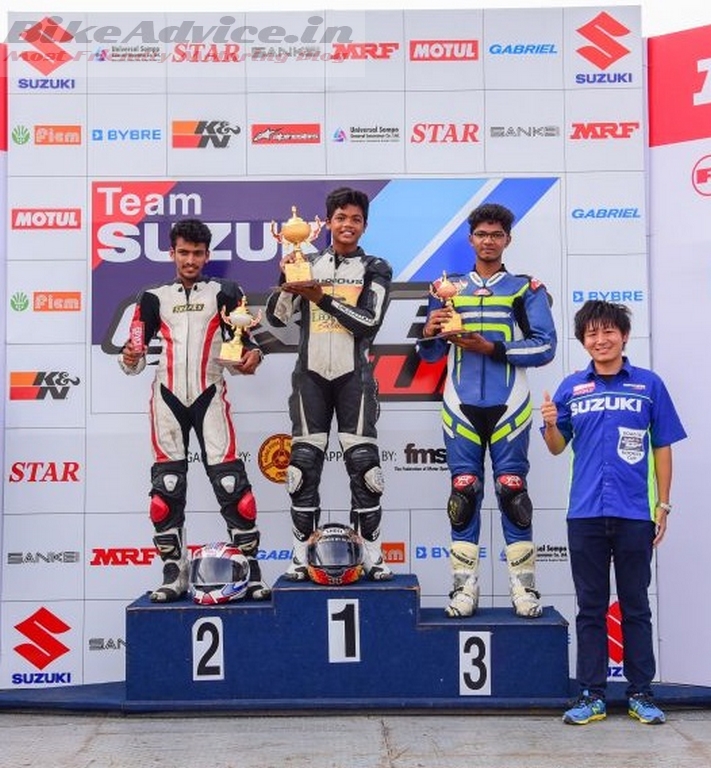 Oh, by the way, some of us North Indians are finally setting the Buddha International Circuit on fire. No, I am not talking about rioting and torching stuff; some really competitive motorcycle racing is what I am referring to here. Okay, time to get a loan for that custom leather suit…