Blackbird, as I call it fondly – has been more than a two-wheeler for me and my family. In fact, it has become a part of my family. Even when I’m not around, my parents take care of it – My neighbors love it and it has been my pride where ever I ride it to. I have covered about 12,000 fun filled kilometres on my bike till now which I bought it on 31-January-2009. There were both Ups & Downs owning the Bike, but overall it has been more of smiles than sad endings. I will take this moment to review the interesting 10,000 Km’s on my ThunderBird TwinSpark. The review is solely in my perspective of how I see things and what I feel about my Bike – It is bound to vary for others. 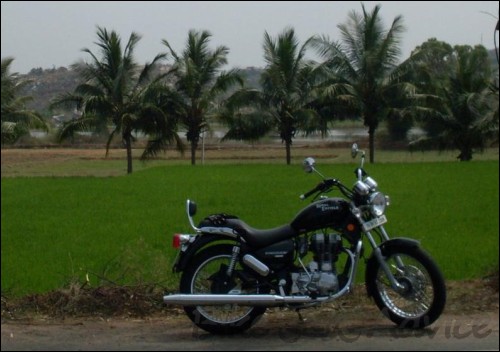 Looks (9/10): The Bike looks Sturdy, Macho and makes head turn where ever you go. Keep it shining, and it will shine up your day! The Nice Big Fuel tank, comfy sofa’ like seats, bigger tyres, relaxed high lift chopper style handle bars make the bike look the best. The Bike comes in three colours, I personally liked & favoured Black colour all the time – Also Silver and Red are other two wonderful variants for the ThunderBird.

The Instrument cluster is that of a Twin Pod comprising of Speedometer and Trip meter in one side and The RPM meter and Fuel Gauge on the right end. I’m content with the odometer designing, it looks classic, not too flashy and that it gives required details clearly. 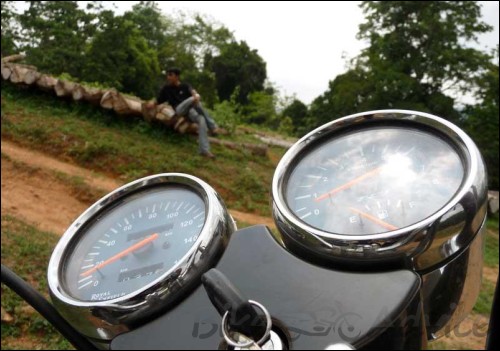 The Rear-View-Mirrors (RVMs) are of immense use, But the view ability is not top-notch. It happens so that you end up bending up to get a clear view of who is behind or sometimes, you just won’t get proper view of who is behind you. If you are a regular Highway rider, I suggest you change it to that of Bajaj Avenger, Which not only adds better looks to the Bike, but also gets you more view of what’s behind you! 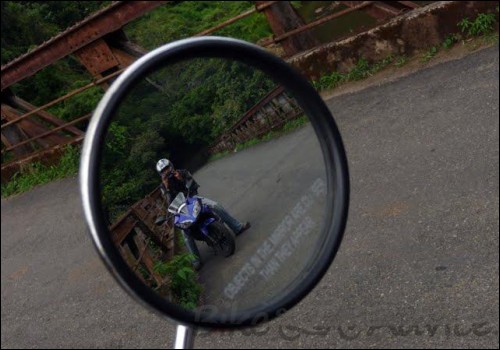 Engine, Power & Refinement (8/10): The Bike has a 350cc Engine, powered with Twin Spark feature which enhances quicker starts and better pickup / acceleration. It has Automatic Hydraulic Tappets, which helps in efficient combustion, optimal valve timings and not to forget the noise free engine!! Also, The Engine is fitted with an Automatic De-Compressor, which enables us to start the engine without any fuss.

Overall, the engine is stress free, relaxed and pulls away like a wild bull. I have personally ridden 250+ Kilometres / 4 – 5 hours non-stop. There were no signs of engine getting very much over heated or breaking down. Though, the engine does get heated up – That’s normal for a Bullet and once you got used to it – It will never fail you! 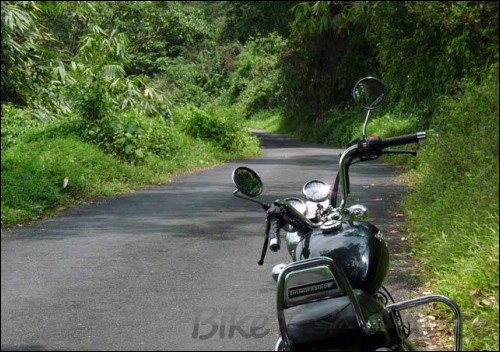 The power delivery is crisp; Throttle response is quick and was never sluggish – Not even when I rode a 12 hour ride in rain from Chennai to Coorg last Monsoon. The vibrations are plenty after you hit 4000 RPM and till then it just eases away! Also, try to run in your bike during every long trip – do not just hop on and start milting 100+Kmph. Run in gradually increasing the speed and change the gears at proper RPM levels. Vibrations are normally less once you run the bike constantly increasing the speed from 60 to 80 to 90 than hitting 90 right away.

Top speed was never in my thought and it just vanished away after buying ThunderBird TwinSpark. I bought the bike for relaxed touring and not for high speed runs. I always try to keep it around 4000 – 4500 RPM and the maximum speed I was able to obtain was 115 KMPH on the Speedo @ 5000 RPM, Not to mention the vibrations that you would have to incur speeding away at 5000 RPM. 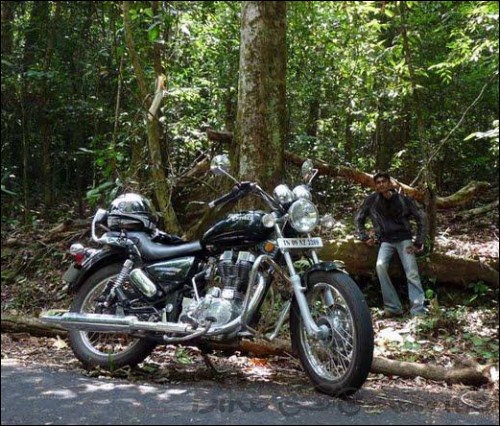 About the technical details: The Bike powers a 350c Engine, Cranking out a nice 19.8 BHP @ 5250 RPM. And for the torque, which always is a backbone of bullets – The TBTS has 28Nm @ 4000 RPM. The engine Gear-Box is equipped with five speed transmission (One Down – Four Up) favourable for mid-range torque!

My Verdict (8/10): The ThunderBird TwinSpark is overall an amazing bike. It covers almost all of the newer technological aspects, has stricter emission norms, gives you incredible mileage and has less or very much little maintenance issues comparing to the older Bullets. For a touring freak like me, there is no other bike which gives me a comprehensive package like that of a ThunderBird TwinSpark and happy that I bought one and will always recommend for my friends to buy one. Why wait? Leave Home, on a ThunderBird TwinSpark!