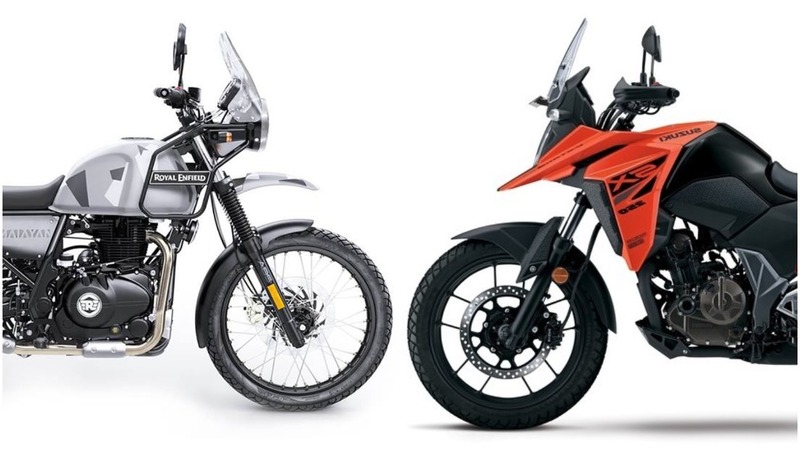 V-Strom SX vs Himalayan – Which one of these pips the other in key numbers? Is the new Suzuki a worthy rival against Himalayan? Let’s compare…

V-Strom SX is the latest joinee to this entry level ADV race in India. We have already compared it with KTM 250 Adventure and Benelli TRK251. In this story let us pit the popular Himalayan against the surprise from Suzuki, in an on-paper duel…

Even though the Himalayan comes with a bigger motor, it churns over 2.3 hp lesser power but where the Royal Enfield takes a clear lead is in the torque department – it churns nearly 10 Nm of higher pulling force. It is also generated at a much lower rpm and that suggests that the Himalayan could not be the fastest among the two but it will definitely be a better rider specially in low and mid revs – much needed for off-roading and traffic riding.

The Himalayan also trumps the Suzuki in terms of fuel tank capacity but that 5-speed gearbox is a downer for sure, specially on long, open roads.

As of now, we don’t have the information about the frame that is being used by the V-Strom 250. The Himalayan is using a Half-duplex, split-cradle frame connected to telescopic forks.

But what is pretty evident is the ADV credential of the Himalayan. It’s front suspension can travel 80mm more and add that with a 15 mm higher ground clearance and you have a clear winner here – when talking about tackling off-roads. How does the V-Strom’s suspension handle all of this and how does that compare with the Himalayan can be known once we ride the Suzuki.

Combining the fact that the V-Strom 250 SX is 32 kg lighter and has a 25 mm shorter wheelbase, it is expected to be a more agile and better handling bike than the Himalayan.

But, the Himalayan can cater to a broader variety of riders, thanks to its 35 mm lower seat-height. Suzuki is also offering a seat height reducer (uptil 810 mm), however, that is an optional extra.

The Himalayan comes with almost an off-road spec 21 inch front tyre – again signaling a better off-roading prowess, however, the rear tyre size of the V-Strom is wider.

Both the bikes get dual-purpose rubber but Himalayan comes with more off-road friendly spoke wheels whereas the V-Strom is offered with spoked-type alloys.

The Suzuki gets full-digital instrumentation equipped with Bluetooth connectivity through Suzuki Ride Connect app. The Ride Connect app provides various smartphone features to the rider along with turn-by-turn navigation built in as standard.

The new V-Strom 250 SX slots just below the Himalayan in pricing. The price difference is not very significant and both the motorcycles come with their own share of strengths.

BSA GoldStar vs RE Interceptor: Battle of the Retro 650s [COMPARO]

In initial impressions, the V-Strom may have a more reliable engine and the motorcycle may be quicker off the block. However, for ADV kind of usage, the Himalayan’s motor should do better mainly owing to its low-down torque. It also comes with more ADV spec features like bigger front tyre, much bigger suspension travel, etc. On the other hand, the V-Strom SX is a more modern motorcycle and comes with few more features.

But, these are just some numbers on paper. Thorough test rides of both the bikes are required to access which one is a better package among the two, in the real world.