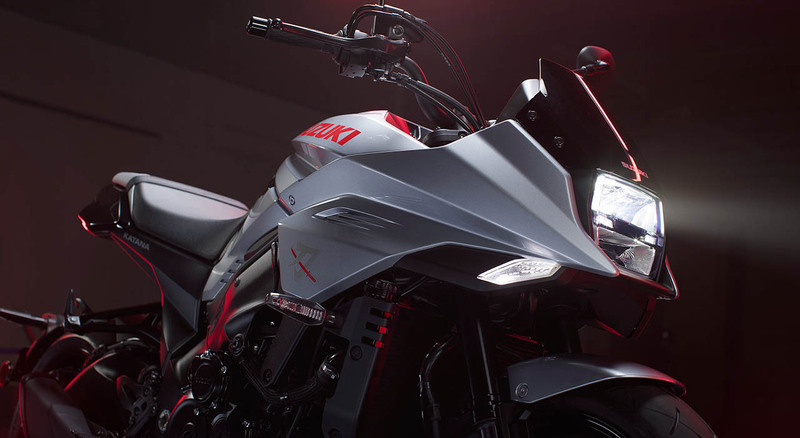 Suzuki Katana launch in India has finally been confirmed by the manufacturer. It was showcased back at the 2020 Auto Expo…

So, have you ever looked at a naked or streetfighter and wondered – where does this curvy and, at the same time, muscular design come from?? Who and/or what inspired and evolved this design that is now very common among all range of naked bikes??

If you did, you are very lucky because we have the answer – Suzuki.

Yes, it is Suzuki who perfected and then evolved the naked/streetfighter design over the years. Two of the best examples of this evolution are the Suzuki SV650 and the legendary & menacing Suzuki Katana.

And the very same legendary Katana is coming to our shores very soon.

It is not the first time that we are mentioning the legendary Katana in relation to the Indian market. Suzuki India have already introduced and showcased the legend at the 2020 Auto Expo.

And more than 2 years after being showcased, the Japanese manufacturer has finally teased the arrival of one of the most striking and gorgeous looking motorcycles on the planet.

Every single aspect, every single element about the Katana is said to be exemplary. It is said that the Katana is one bike that carries the true spirit of motorcycling within itself. It is arguably one of the most meticulously researched and designed bikes by any Japanese manufacturer over the years.

Take the name, for example – Katana – it is the name of the legendary Japanese sword that the Samurai carried during the Feudal Japan era. The Katana sword is considered to be the most honorable, precise & lethal weapon of its time.

And the very same legendary status is carried over by the Suzuki Katana in the global motorcycling community.

For 2022, Suzuki have updated the 999 cc inline-4 engine to BS-VI compliance. The revered 4-cylinder motor churns 152 HP and 106 Nm of torque. The BS-VI update has put in 2 HP more but has removed 2 Nm torque from the engine.

Other new additions to 2022 Suzuki Katana include a new ride-by-wire throttle system which adds 3-riding modes, a new 5-option Traction Control system and a bi-directional Quickshifter.

The Chassis of the Katana consists of a rigid Twin-spar Aluminum main frame connected to 43 mm KYB USD forks at the front and link-type suspension connected to an arched swingarm at the rear.

The braking duties are handled by dual-discs at both ends, controlling the rotation of 17” alloy wheels consisting of 120-section front and a huge 190-section rear tyre. Another huge number is the weight, which clicks at 215 kg and the bike rides low with just 140 mm of ground clearance.

We expect the launch to take place in the coming weeks. It could be priced at around Rs. 13 Lakh – Rs. 14 Lakh mark and will compete with the likes of BMW S 1000 R streetfighter.