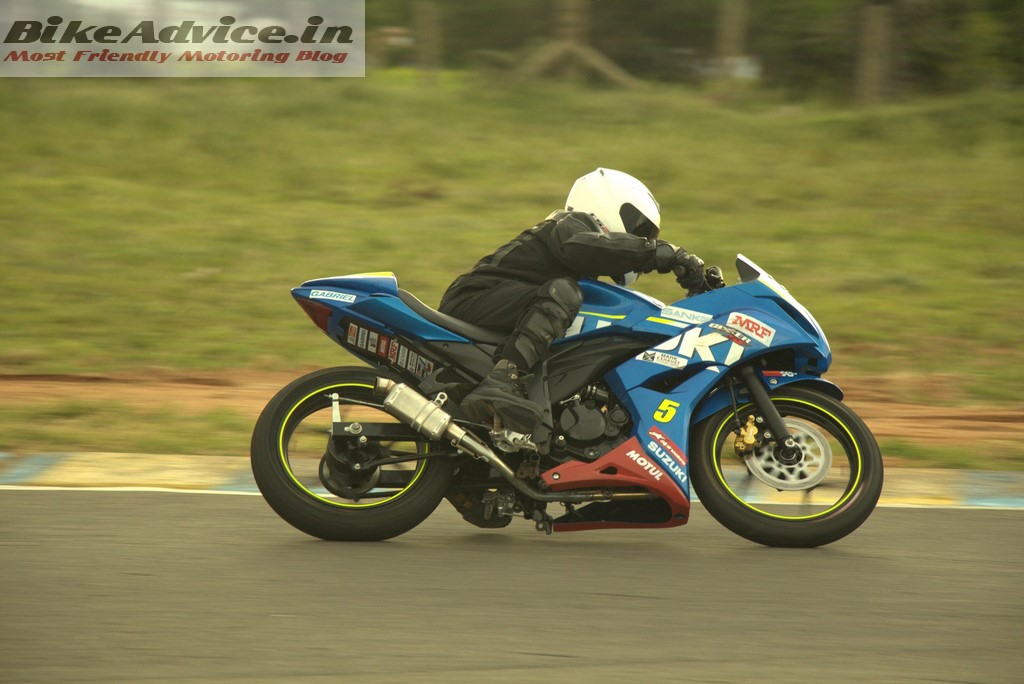 Bike enthusiasts (including us motoring scribes) had been quite perplexed for long on Suzuki’s product strategy for India. We wondered how, on one hand, could a manufacturer produce the world’s fastest motorcycle (okay, there are faster machines now but the ‘Busa did keep the crown for more than a decade) and, on the other, give us stuff like the erstwhile Heat and Zeus. No, they were not bad bikes per se; it’s just that they simply didn’t do justice to the blitzkrieg imagery projected by the mighty GSX-Rs.

And to those few, who have had the pleasure of being acquainted with the wild RGVs, Suzuki’s India operations seemed to be a joke. I mean, come on, a manufacturer who has been making some of the best 125s, 250s, 500s, 600s, 750s, and so on, since the Dark Ages, came to India to take on Hero’s 100-125 cc commuters? Great. And the company couldn’t even learn from others in the game. For example, Yamaha has the YZF-R1 at one end and YZF-R15 at the other; Honda has the CBR1000RR and smaller CBRs too (which look like mini VFRs than CBRs, but that’s a topic for some other day); heck, Kawasaki is the best placed of them all with a 300 and two 650s on offer that are not just merely scaled down versions of the big green hulks, but proper, entertaining sportbikes. And Suzuki? Well, you know it. The Inazuma (please don’t hit me when I say I was one among those 6-7 people who liked that bike!) was the result of a dispassionate night spent by Zeus (pun intended) in the arms of a B-King. Suzuki just didn’t know what to do with it, so they aborted it… Sigh! 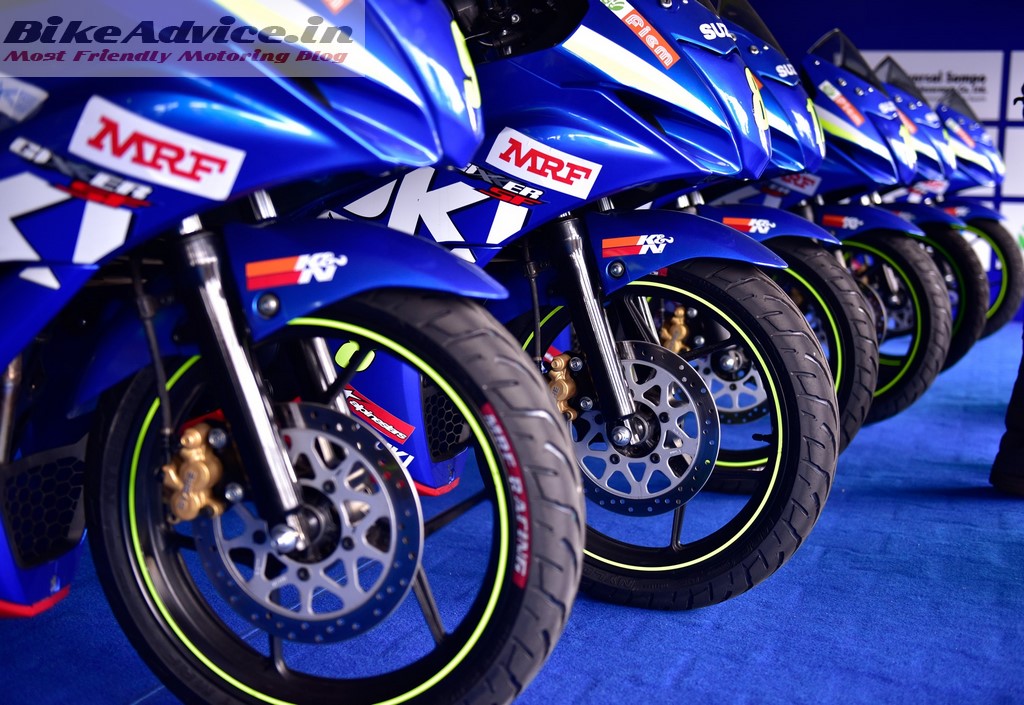 The point is, you just cannot have the flagship fire-breathing dragons (out of reach for most) for branding, and piddly, castrated, inconspicuous home lizards in showrooms for sale. Your average customer (read “sub one-lakh-rupee bike buyer”) should feel the same emotion upon his purchase that a rich kid goes through guiding the showroom manager to his dad’s cheque book upon eyeing an Intruder… 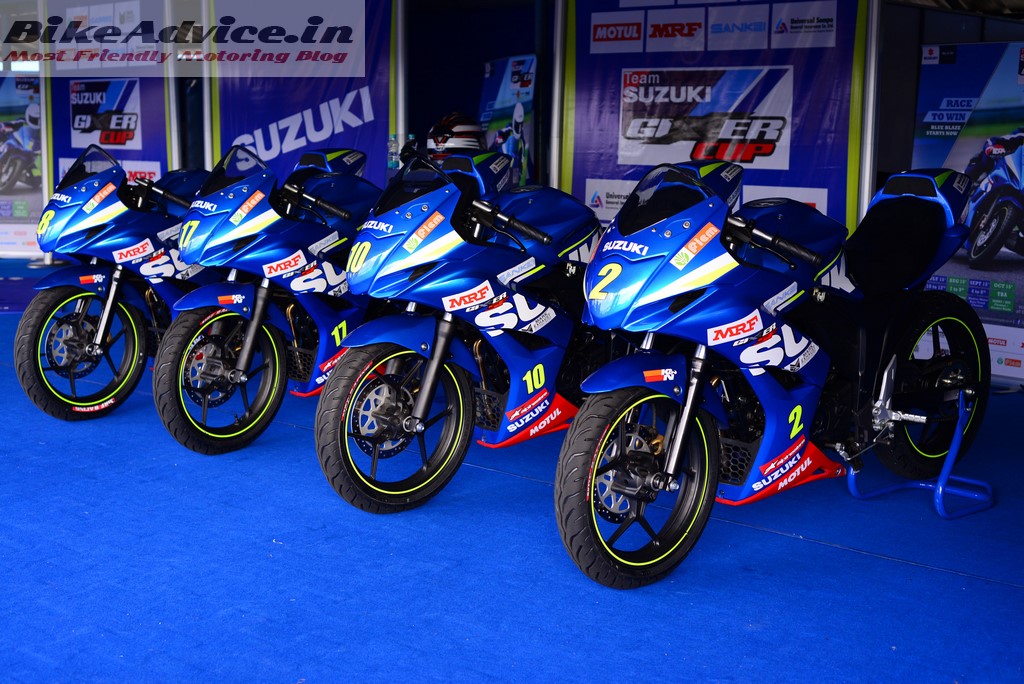 Enter the Gixxer twins. Suzuki India certainly believes in the adage that it’s “better late then never” and these new motorcycles, finally, not only shook the 150 cc table, but turned it upside down. The others are now just seeing blue. Suzuki MotoGP livery blue. Thankfully, the company is not taking the bikes’ popularity for granted, and so is not only developing a Gixxer 250, but has also entered a one-make championship series with a slightly modded SF. 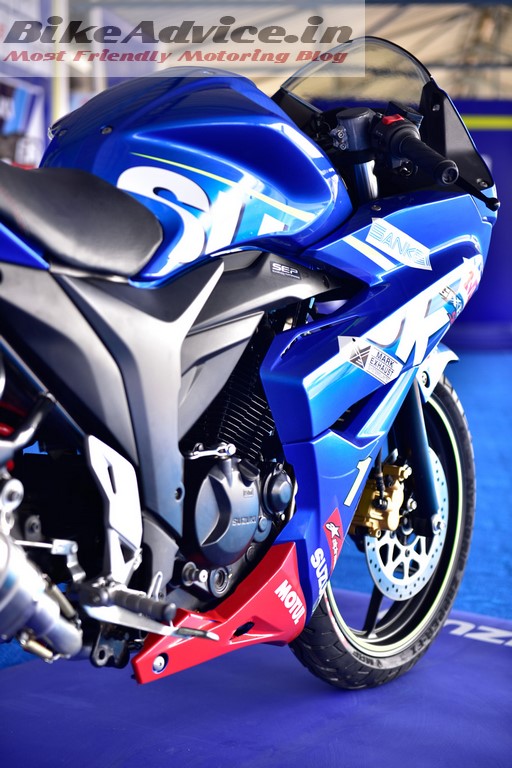 “What’s in it for me“, you ask? Well, for starters, YOU or anyone who can legally ride a bike, can participate in the race, theoretically at least (you may want to check the prerequisites at Gixxer Cup’s official website). The fee is only INR 2,000 for which Suzuki will give you one of the twenty Gixxer Cup SF bikes, fuel, technical backup, and also a leather suit! You must be a greedy pig if you expect more. Secondly, despite the bleak chances, we still expect to see some of the race-fit parts in Suzuki showrooms sometime soon. 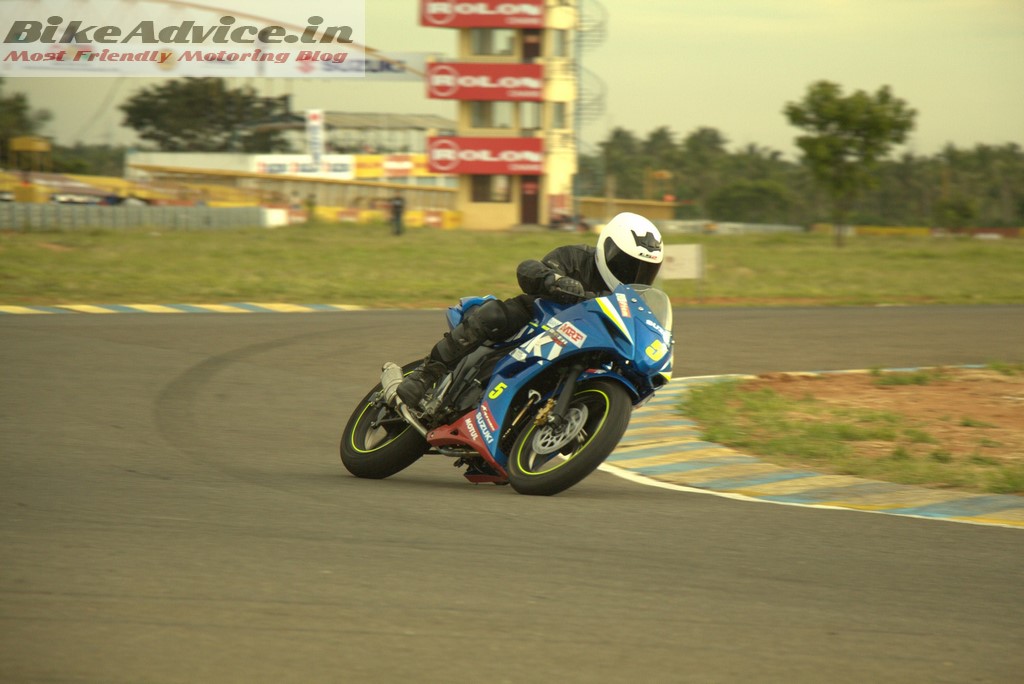 Anyway, we were recently invited by Suzuki India to the Kari Motor Speedway to sample their race bike a day before the commencement of the first race of the Suzuki Gixxer Cup 2015. Which also meant that Suzuki somehow got only two hours to fiddle with the mixture screw and different size jets to get the tuning at its optimum for the race track. Therefore, initially, all bikes were badly sputtering around 8,000 rpm and simply refused to cross that mark. A couple of quick corrections by the engineers made the bikes smoother by a couple of notches but the ghost still came back at 8k. The trick was to short shift and stay south of that mark, and take advantage of that beautiful spread of torque to hustle out of corners. 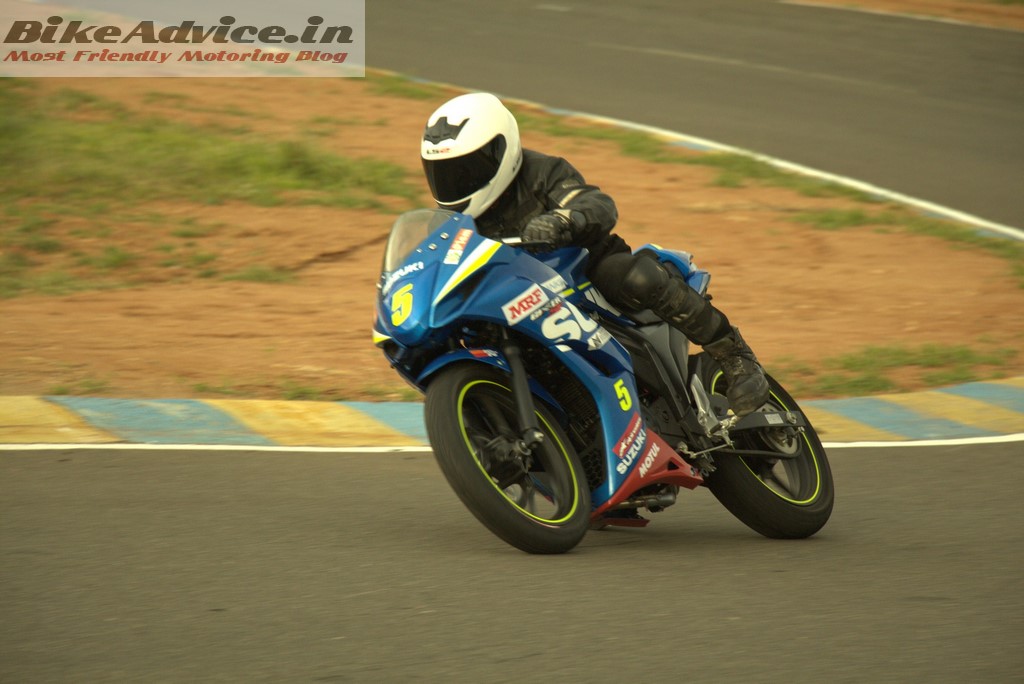 The engine has been left untouched. It just breathes more freely now, thanks to a new, less- restrictive air-filter and a loud free-flow exhaust. The engineers told us that the front sprocket has gained one more tooth in the interest of better top speed, but they also added in the same breath that now the speedo runs an error of around 15 per cent. For example, if the bike shows 100 km/h, it translates to around 115 km/h according to Suzuki technicians. 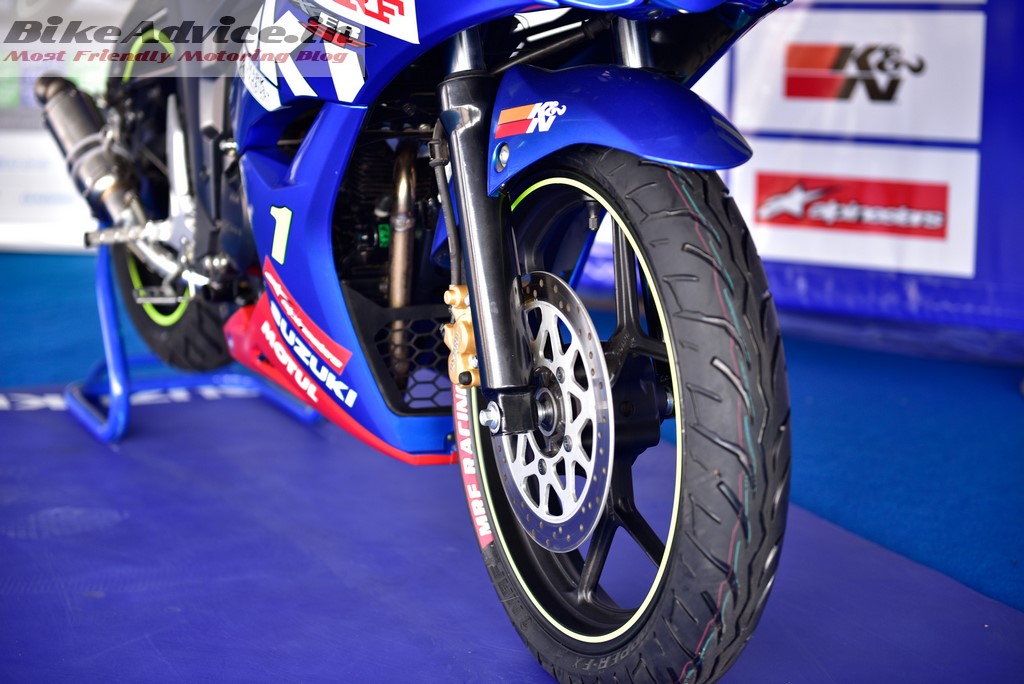 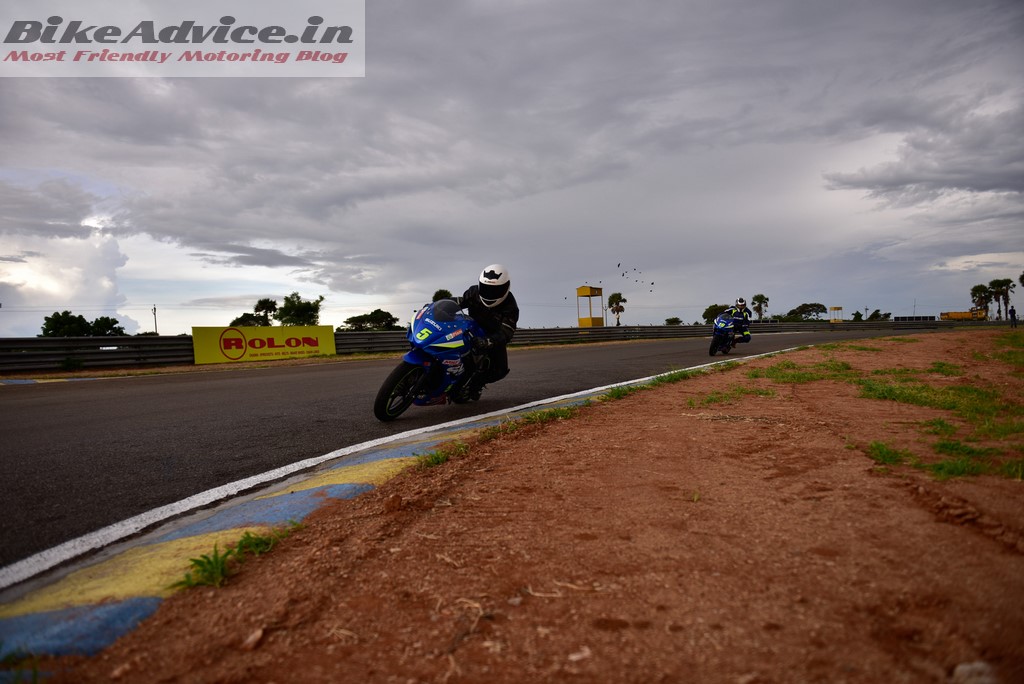 For the record, I saw 110 km/h on the speedo on the long straight, whereas a taller and heavier friend saw 104 km/h. Taking the aforementioned speedo error into account, 110 km/h translates to a true top speed of 126.5 km/h. Nice, but even the stock SF is capable of more than 124 km/h on regular roads… Suzuki claimed that although the race bike was not put on a dyno yet, it should be producing around 17-18 PS of peak power. I doubt it… You can’t gain 2-3 PS in a 155 cc engine by just giving it a free-er filter & exhaust combo plus bigger jets. I might be wrong here, but it definitely did not feel any more powerful than the stock bike. Which is not a bad thing really as the Gixxers are not at all underpowered for the segment by any measure.

And, to be honest, we wouldn’t have left wanting for more power from a 150 on the Kari had it not been for the imperfect fueling in the first bikes. Still, I got to hear that Suzuki had rectified the issue next morning and the young guns (“seasoned Kari racers”, in other words) were able to push the SF beyond 130 km/h (speedo indicated) in the afternoon the same day. 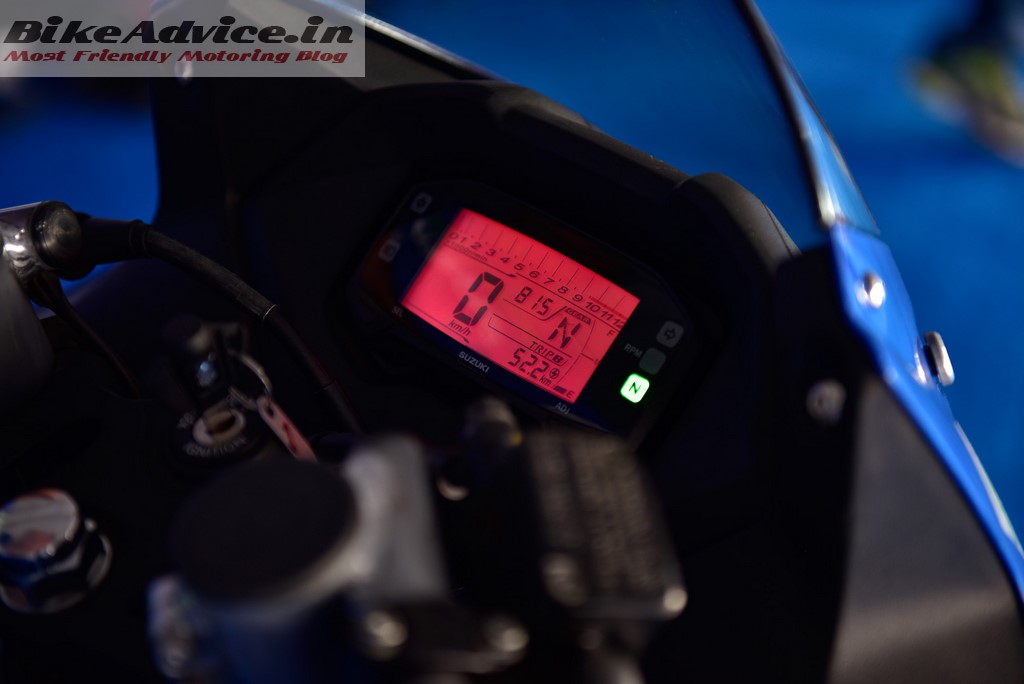 Okay, so that was the not-so-good part. But potential and current owners should not worry as a) that canister isn’t street legal, and b) the Gixxer’s motor is brilliant in stock form anyway. It’s not for nothing that we got an SF in my family a day before yesterday… Yes, I sure do put my money where my mouth is. 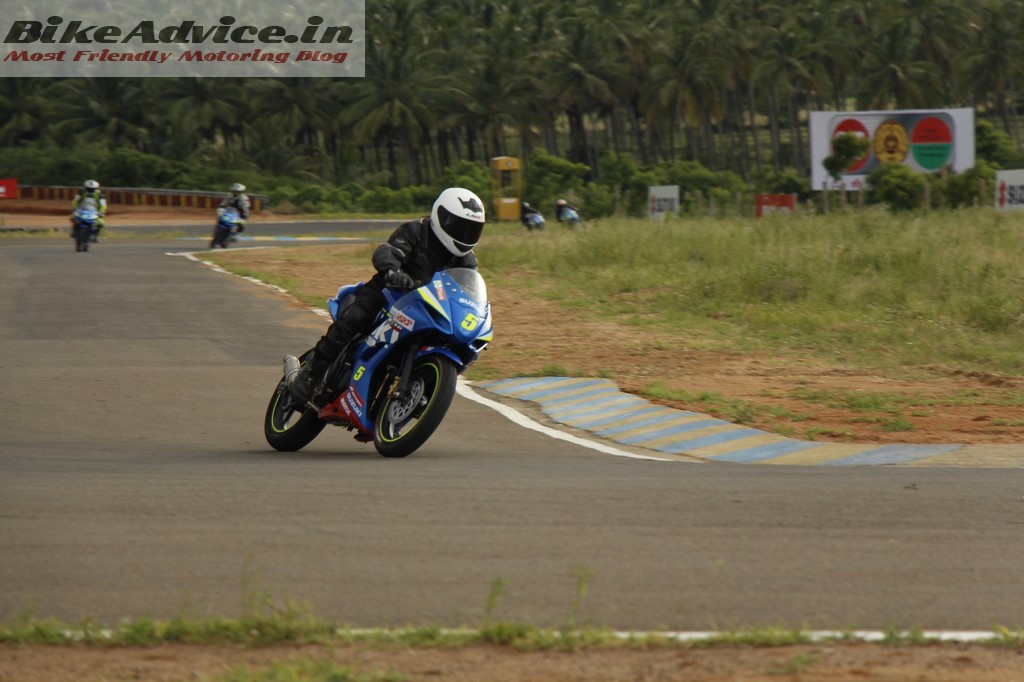 Now comes the best part. If you happened to have read our Yamaha YZF-R3 story you would have noticed the trait I consider to be the most important in a track bike. Well, even if you haven’t read it, you still would know probably that I am talking about “handling”. Both the Gixxer twins were able handlers to begin with (the SF even more so with the front feeling more planted because of the added weight of the fairing), but the Gixxer Cup SF’s handling has risen to another level altogether! Diving in and out of the corners is like second nature for this bike, and from the third lap onwards I was pushing it more and more without the bike even hinting to give away. Awesome! 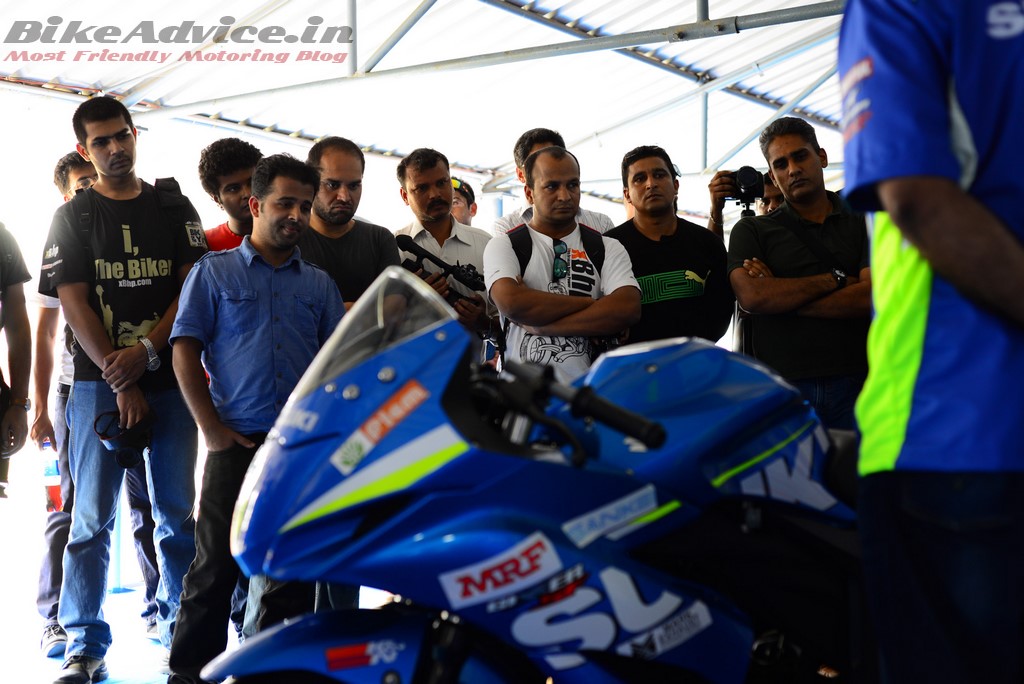 Suzuki lowered the front suspension by 20 mm; gave it clip-ons, super-sticky race MRFs (not available off-the-shelf), rear sets, and removed the rear seat, headlamp, flashers, rear view mirrors, rear fender and other paraphernalia, and shedding a claimed 20 kg in the process. Again, I couldn’t feel any difference in the bike’s weight. But what I could feel was an astounding level of grip with the rear brake pedal and left foot peg emitting sparks on right- and left-handers, respectively, every single time! The brakes are already fantastic in the stock bike and together with the gluey rubber on the race SF they helped me in keeping the bike vertical enough to avoid testing my riding armour’s efficacy. 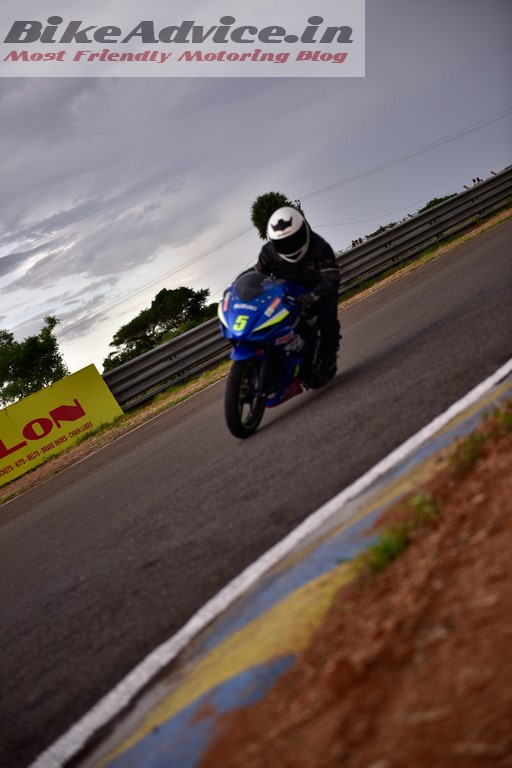 Grazed boots and footpegs, and bent rear brake pedals of more than ten bikes meant that all us journos were having so much fun on the track that we just didn’t feel like calling it a day! And mind you, there were two dozens of us out there and only three (including me) were first-timers on the Kari. In other words, all others had ridden some powerful machinery on this track earlier and they still couldn’t have enough of it on the lithe SF. I couldn’t too. That should tell you a lot about this little cracker of a motorcycle. 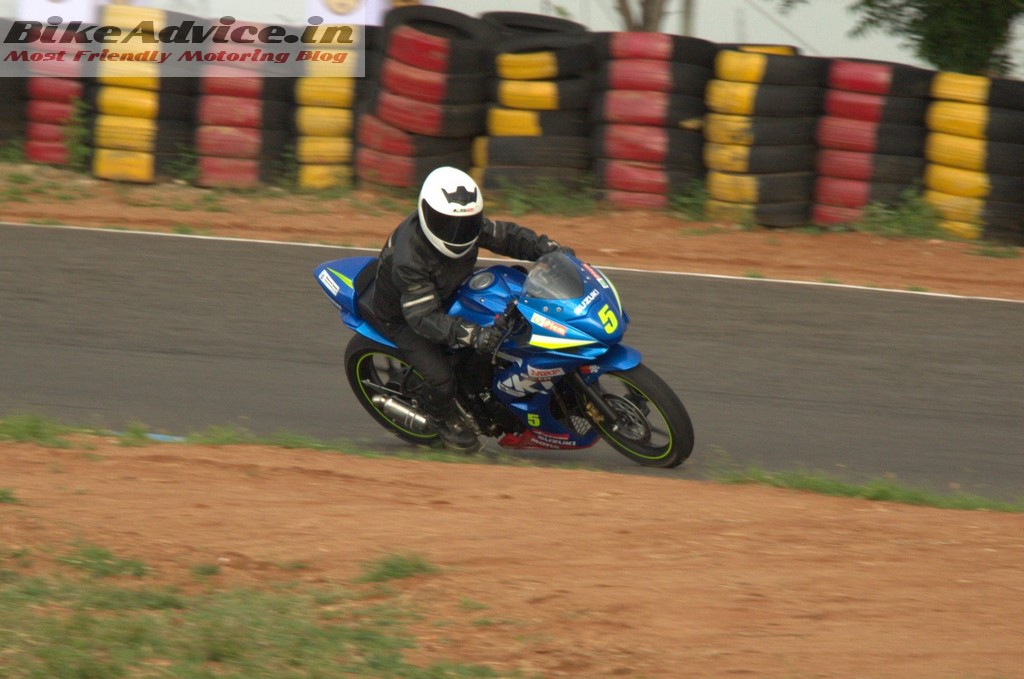 A pat on Suzuki’s back for foraying into the one-make series, and we wish them all the best for the next two rounds of the 2015 championship. Now please bring that 250 soon, will you?