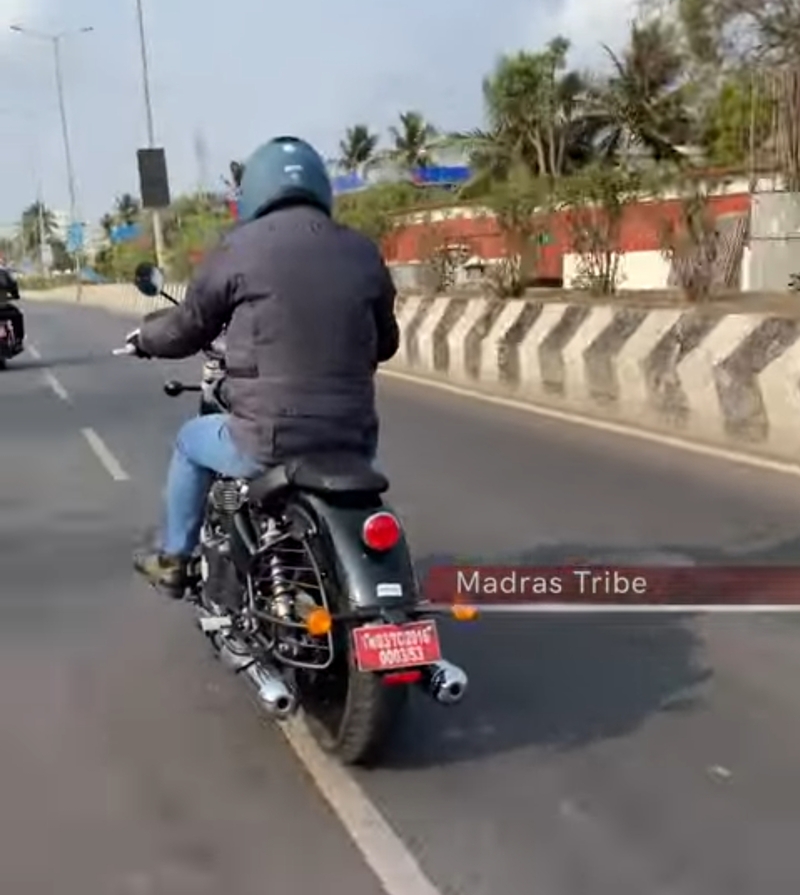 So, Royal Enfield is working really hard on their objective of dominating the Indian motorcycle market by bringing various competitive motorcycles in the 300cc-800cc segment. And seeing the company testing many products overseas, hints that this objective of theirs extends to the markets outside India as well.

Last year, Royal Enfield shared their plan of introducing at least 3 new models based on their 650cc platform, which currently only has two offerings – the Interceptor 650 and the Continental GT. Based on various whispers and instances of spotting various test-bikes, we (sort of) have an idea what bikes RE might be working on.

Recently, a YouTube video surfaced which shows us a pair of 650cc powered cruiser-cum-roadsters from Royal Enfield being tested and both of these bikes appears to be production-ready.

At first glance, both of these cruisers appeared to be variants of the same model, as they share many visual cues and elements. But, on a deeper look we can see that these are two different models based on the 650 platform.

Out of the pair of spotted test-bikes, the most eye-catching is the one flaunting a lot of chrome elements.

The model, which is expected to be called Super Meteor 650, looks very similar to the existing Meteor 350 motorcycle, but has a bigger presence. This model possesses traditional cruiser elements like a long wheelbase, relaxed seating ergonomics, rear-pulled handlebars, round lighting fixtures & mirrors etc.

The Super Meteor 650 has a big presence and looks premium thanks to chrome elements added to the cruiser bike. The pair of body-length exhaust pipes are finished completely in chrome, connected to a parallel-twin engine having silver-finished engine-casing.

The addition of new USD forks is very clear along with the presence of traditional round instrumentation paired with Tripper Navigation Pod. Every other element on the cruiser is completely blacked-out including the broad fenders, fuel tank, frame, seat etc.

The second test-bike of the pair is the one which is a mystery here. The all-Black bike has very similar design to the SG650 Concept showcased during the EICMA 2021 event. This bike’s design is more closer to a roadster than a cruiser, but possesses elements of a RE cruiser.

There is not a single speck of chrome on this bike. Everything, including the fuel tank, the dual exhaust-pipes, the engine casing, the body panels, the light fixtures etc. is all blacked-out. Either this model will carry the all-black theme or RE is using the dark look as camouflage to hide the finer details of the bike.

The powerunit of these upcoming cruisers will be the currently used 648cc, parallel-twin engine putting out 47 HP and 52 Nm of torque. The engine will be paired with a 6-speed transmission and could have specific tuning to match the characteristics of the individual cruiser.

Finally, looking at the Super Metero 650 test-bike, it is safe to assume that the bike is in its last stages of testing and is ready to go into mass-production.

The Shotgun 650 appears to be a little ways away from being put into production. It looks like the Shotgun is being bechmarked here with the Super Meteor model suggestong that it still might be under rigourous testing and refinement.

Let’s keep our fingers crossed that all goes well in the world and we can see these cruisers at our nearest dealerships and on our roads by the end of the year.