The Pulsar 200 NS seems to have trespassed over to the traditional territory of the Kawasaki. We spotted a Pulsar 200 NS, sporting a green livery, on the Indonesian blog TMC Blog. 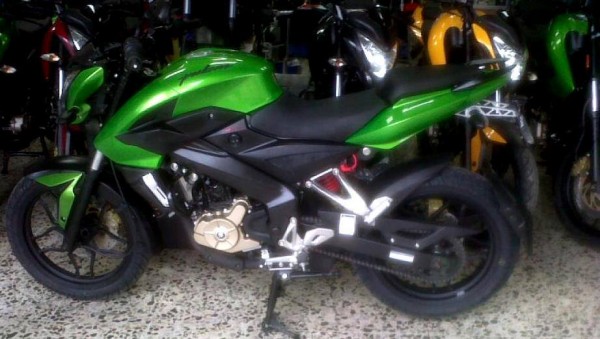 In sync with our earlier reporting of Bajaj and Kawasaki joining hands for marketing some of Bajaj’s products in Indonesia through the latter’s outlets, the joint-venture seems to have become a deciding factor in the choice of the paint job! In India, the 200 NS is available in four shades – Cherry Black, Saffire Blue, Tosca Red and Mustard Yellow. Regarding the splattering of green, we feel Kawa’s opinion has had an influence. In fact this appears to be a slightly darker than Ninja green.

The above mentioned Pulsar 200 NS was also spotted on the Facebook page of “Pulsar 200 NS Indonesia“. It was totally similar to the Indian models in all aspects but the presence of the utterly useful Indian accessory, the Saree Guard. In the background, few other models of the Pulsar 200 NS were present too. All these cues project the fact that Kawi-Bajaj combo is soon going to unleash the 200 NS in the Indonesian market. This new Pulsar 200NS will join the already existing Pulsar 180, Pulsar 220 and Pulsar 135LS in the Indonesian market. Interestingly, this Indonesian Pulsar 200NS also goes through a few changes which are done by Kawasaki.

We were able to dig out a few more details from the Facebook page. It is apparent that Bajaj Auto Indonesia has joined hands with Mr. Mechanic, a local franchise business dealing in bike shops as well as the servicing for various models available in the market. Mr. Mechanic will provide after-sales service for the Indonesian Pulsar 200 NS.

In what seemed to be like the transcript of a short speech (Found as the photo’s Caption on FB), Mr. Dinesh Kulkarni, President-cum-Director of BAI, stated that the partnership with Mr. Mechanic was a step of Bajaj to ensure the best service for all Indonesian customers. It seems Bajaj will soon commence the training phase for the mechanics who will be engaged in the servicing of the Pulsar 200 NS.

In addition to the deal with Mr. Mechanic, Bajaj has also roped in PT Tunas Mega Spirit (TMS) as a spare part distributor in Indonesia. This move is set to ensure that the customers of Jakarta and the surrounding areas need not face any hassles in looking for spare parts.

Do you feel the Pulsar 200 NS looks cool in its Green avatar? Should Bajaj provide this as an option in India??