Till now airbags have been restricted to only high end cars and MotoGP racers. But now a European based company SPIDI known for over 30 years for motor-sport lifestyle has introduced its safety device to the street market known as SPIDI DPS Airbag System. But as of now it is only on sale in The US, Japan, Europe and a few more other countries but will be for sale in Indian street market very soon. 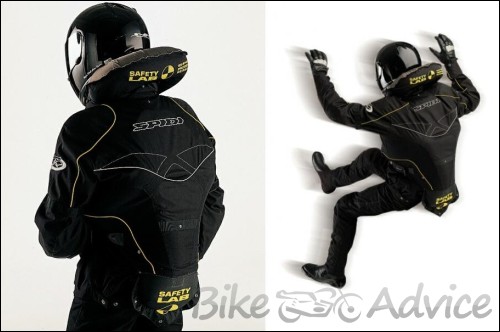 Working: Basically this airbag is worn just like a simple jacket as we usually wear and a lanyard from the jacket is attached to the handlebar of the bike. The working of this airbag is pretty simple as when the rider is ejected from the bike, the force on the cable triggers the pin that pierces the carbondioxide cylinder and the idea is that the weight of the rider’s body will cause enough force for the breakaway connection between the pin and the carbon-dioxide cylinder to separate. 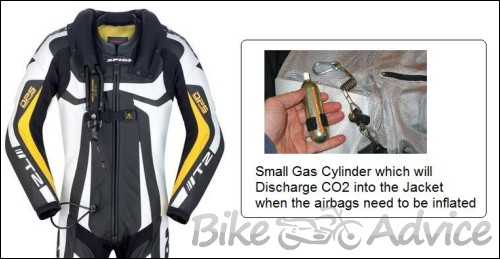 The carbon dioxide cylinder is placed on the outside of the airbag in the area of right hip. When the airbag inflates it will protect the rider from landing on the hard metal cylinder or on the triggering deice.

The airbag is reusable by simply unscrewing the empty cylinder and replacing it with a new one. The airbag’s inflated neck section should be tucked back in under jacket’s collar section under hoop and loop closures to use it for the next time. 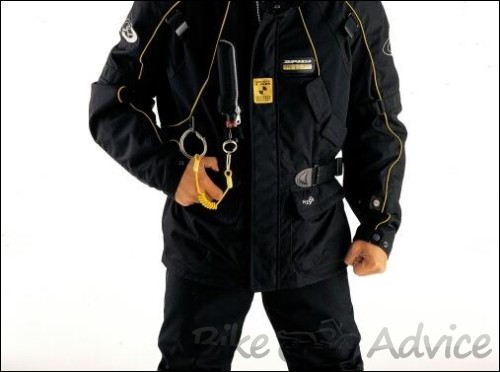 Price: since the airbag is not on on sale in India it is pretty difficult to predict the price of the device. When it hits the Indian market, we just hope the jacket to be priced around Rs.15,000 to 20,000 for the low end jackets with lanyard functioning and around Rs.25,000 for the high end with electronic sensors.