You might have heard about this bike but if you haven’t had a chance to read about it or test-drive it yet. Here is your chance, let me give you my take on the The Royal Enfield Thunderbird Twinspark. 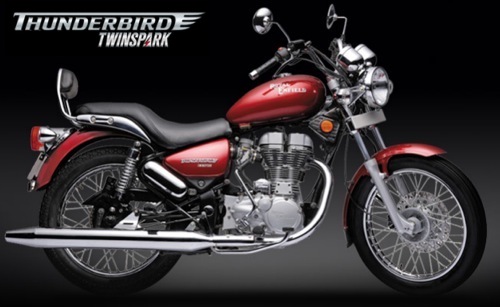 Twinspark plugs mean better combustion of fuel, which translates into better fuel economy, more pickup, more power and torque. The All-new aluminum engine is a delight to drive whether in the city or on the highways. It was developed with AVL of Austria. The bike feels better than the old model on all respects, most importantly less vibrations at high speeds and is much smoother. This means that the bullet can now cruise at 90+ km/hr for hours together and you wont be fatigued, say even after a 700 km ride.

The bike has a top speed of 120 km/hr though I never checked it myself as my friend’s bike was brand new and there was no way he would allow me to cross a speed of 80. My friend and me went on a long drive with both driving the bike on turns and we went up to Vijaywada without a hiccup and didn’t even feel the least bit stressed. Comfort for both pillion and driver are superb with great back support.

The bike is a little troublesome to drive in the city roads due to the large turning radius near U turns and wide handlebars and 182 kg weight. This is something all bullet owners will get used to as the dimension of the bike is designed to give maximum comfort for the driver and pillion and is not a cause to complain. 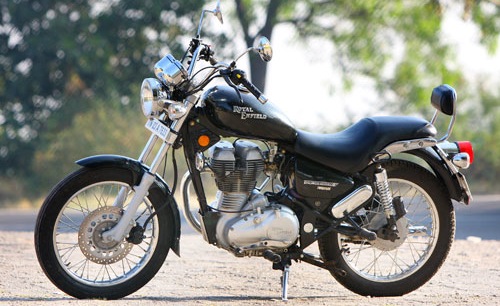 The Thunderbird TwinSpark has fabulous throttle response once the bike crosses 60 the throttle response is almost instantaneous. Due to the heavy weight of the bike the bike feels a little sluggish initially but as the speed picks up she is fabulous and the thump gets more louder. The chassis is the same and the only change is the engine and the overall quality is better than the old model in all respects.

When I spoke to the company officials they said by 2010 all Royal Enfield bikes will have the Unit Construction engine and Enfield may bring in Fuel injection after a few years. You must know that all Enfield’s exported abroad are Fuel Injected but for some reason Fi tech hasn’t been launched in India. Lets hope we get FI sooner as it would only increase the smoothness and efficiency of the Thunderbird.

The engine is 346cc all aluminum with lean burn technology and has 6 plate clutch and 18 watt magneto pole for better charging of the battery. Older models had 4 plate clutch and smaller magneto. The bike has an auto decompressor for easy kick starts. 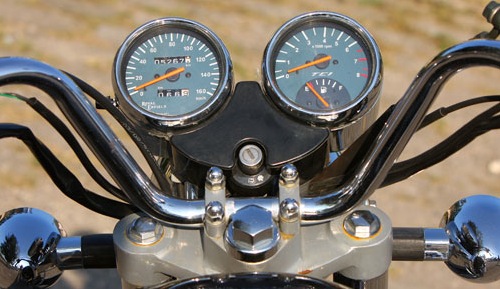 At Rs.1,00,000+ the bike is not cheap, but it is a legend cloaked in modern wizardry. Enfield claims the Thunderbird TwinSpark is maintenance free though only time will tell, as it is too early to comment on this. The bike is available only in 3 colours for you to choose from red, black and silver.

All in all I was mighty impressed with Thunderbird TwinSpark as it’s a marked improvement over the older T’bird. You could expect a mileage of 30 in city and 38 on highways under normal driving. The new engine is the highlight and is what steals the show.

Do you own this bike or ever had a chance to ride on it? What is your idea about Thunderbird?