Amit has submitted this review in our Ownership Review Contest No 13, ensuring himself an assured prize. The contest also offers a chance to win Riding Jacket, Helmet and more.. You can submit your review to us as well. Here are all the details.

It would be near around 2 year of association with my Royal Enfield thunderbird in coming Feb 2014.
The bike is amazing and is a pleasure to ride in terms of comfort, riding feel.The engine’s thump is fine cannot compare it with what it used to be initially in the cast iron engines. 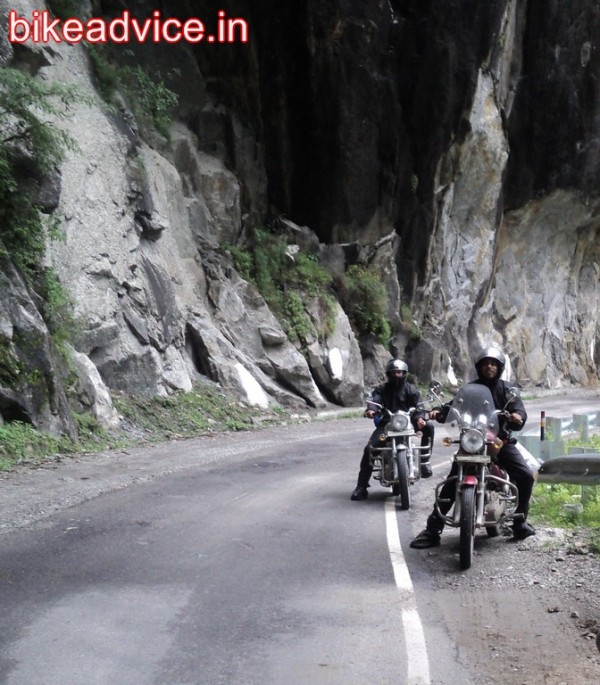 Its among some of the best handling Royal Enfield’s produced although I rate new thunderbird 350/500 far better and the newly launched Cafe racer belongs to a different segment.I have used Yezdi for nearly 9+ years. My father owned a 1984 produced 250 cc yezdi classic D 250.
I was in 8th standard since I started riding yezdi,it was all different than all other bikes around that time. So I was always inclined toward such league of motorbikes. When I joined college I got hands on Suzuki Shogun/Hero Honda Ambition which were of my brother but were used by me in turns. 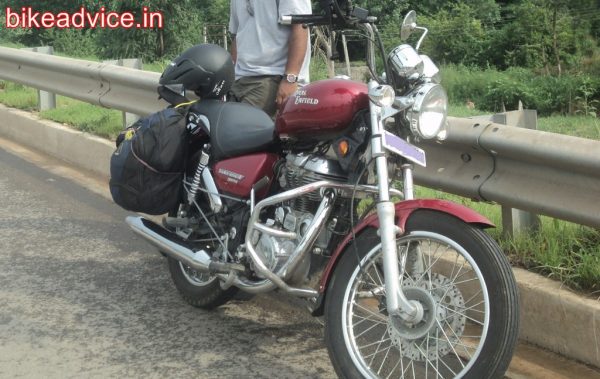 It was in 2012 when my father gifted me Royal Enfield TBTS.Going for Royal Enfield was a simple decision and no other brand was in my radar ever.I booked it on 6th Feb and got it delivered on 12 Feb from KT automobile mahipalpur,Delhi.

Initially when I booked, the showroom guys said the waiting period may extend to one month minimum, luckily I got call on 11 Feb to pick my bike ,
it was meant for someone else but he could not get money financed on time.Due to which I was offered to pick the bike.

As we all are well acquitted with the technical aspects of TBTS and you can find those details in the fellow reviews, so going ahead in this review I won’t talk about those in deep, rather would focus on my experience so far.

I picked it on 12 Feb ,the bike looked perfect, initially when I took it out first time from the showroom ,it was a really easy to handle and the engine responded quite well to the throttle ,I must say new UCE engine has added points to Royal Enfield’s campaign in competing with the present norms and competition with other brands. 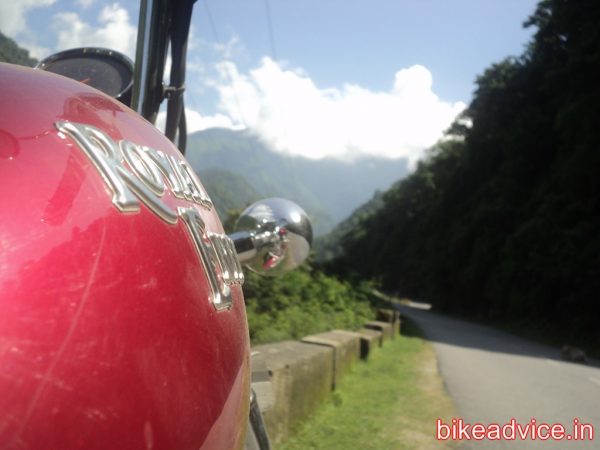 Although the first thing I realized was it doesn’t have that feel of the old cast iron engine. Keeping aside this thing the bike is a complete cruiser with a good road presence.
The Air cooled single cylinder motor with 350cc displacement churns out 19 BHP, I won’t say its plenty of power for two-up cruising but is decent enough to ride on Indian highways but at times this output too feels less, and at full throttle the engine seems to be over stressed. I do agree Royal Enfield are all together a different league of motorcycles and are not meant for pushing hard, but we do expect more in terms of performance.
I have been able to push it to hit 118 kmph top speed, the bike does vibrate a bit at anything above 105 km/hr but these can be overlooked.

Over all the ride is enjoyable and the bike feels light in weight, with nice straight line stability.

The spacious riding position is fine for most kinds of riding.The seat is very comfortable for the rider for long rides, pillion may find it a bit tough for long rides but would be lot better than most of other pillion seats on other Indian bikes.I did two long 1500+ km trips one from Delhi-Rohtang-Manali-Delhi and the other Delhi-Lahual Spiti Valley with my friend on the same bike. Both of us hardly felt any discomfort. 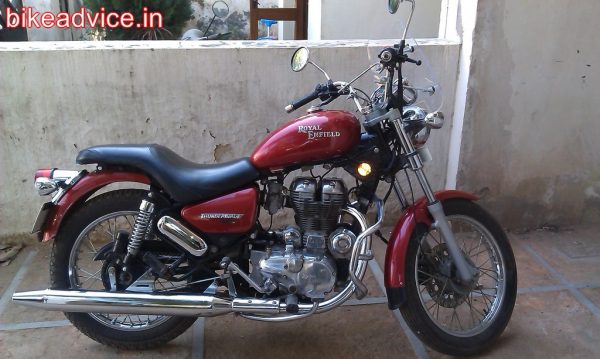 The narrow tires certainly add to the nimble feel, but still provide decent grip to cruise on highways and while taking turns on high speeds. The front and rear suspension are soft and provide a smooth ride but is a little choppy on rough roads at higher speeds .The front disk brake provides adequate stopping power although the back drum brakes feels a bit dull at high speeds and alone is not sufficient in bringing the bike to a halt. But with time you would learn how to handle them with perfection.

The head lamp bulb is strictly okay. It is not good enough to provide perfect illumination at nights, better to go for other available options. The rear view mirrors are good and add to the appearance of the bike but at high speeds they do vibrate and at times its difficult to judge who is behind you and at what distance. I believe this might not be the case with those of new TBTS 350/500.

I have never checked the mileage but I guess would be getting 38km/ltr+ overall. This figure again depends on your way of riding. It’s always good to make engine warm before riding may be leaving the vehicle idle after starting the engine for close to 40, 50 odd secs would be a good practice.

I was really happy with the bike doing well in tough conditions it faced while my recent trip to Lahual and Spiti. It will go on with out giving any troubles, what ever the roads are it handles quite well.
The meter reading is 18000+ in 1 year and 10 months time. Got it serviced seven times so far.The servicing experience is not good, every time you tell the service center guys about a problem in the bike most of the time they would not be able to fix it for some or other reason or they would not have sure shot solution for that. I have faced issues like sound coming from the rear drum, engine misfiring etc. 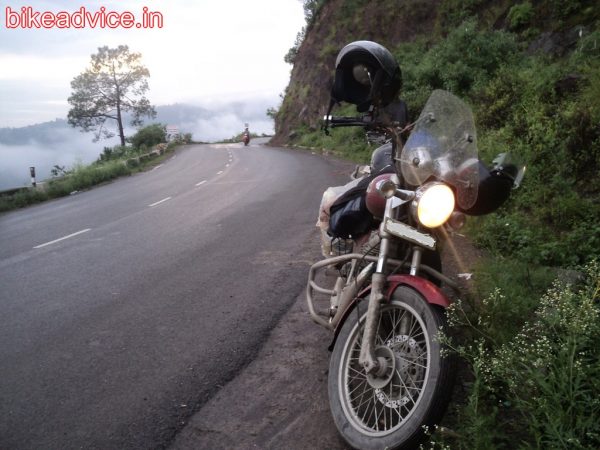 I do feel this is the area where Royal Enfield needs to put an effort, train these guys well so that they can deliver good.
The quality of parts used in the vehicle is not up to the mark , there are small issues if those are addressed and taken care of, it will improve the overall product experience.

My bike Trip meter didn’t worked well from the first day I bought the bike and have to get the entire meter unit replaced 3 times in a year, every time they replaced in few days I realized it’s not working fine and giving right readings. The silver colored cap below the side panels is loose in fitting and can be taken out easily or may come out often itself (pic attached below).
The paint quality is fine although the RE guys have improved the paint quality significantly on New TBTS 350/500. 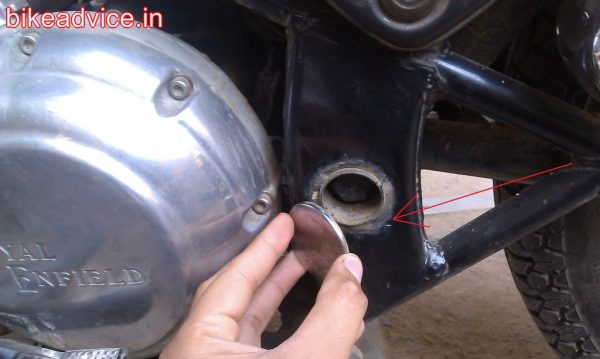 The UCE engine is neat and clean and I have not faced any leakage issues so far. Wide range of accessories like windshields, bags, custom backrests, silencers etc are available in the market to transform your stock machine into a capable long distance hauler which will be of aesthetic and acoustic pleasure. I have not done any modifications so far apart from changing the stock handle bar with that of Yamaha RD 350 extended handle bar which is a direct fit on TBTS. It gives a different riding feel although the stock handle bar is also very comfortable.
Over all the bike is good to have and I am satisfied with its performance and cruising capabilities.

Royal Enfield is a name which carries a biking custom which has brought brotherhood together in past decades, small pros and cons doesn’t matter the pleasure which these bikes offer while riding is enough to overlook every negatives one may point out.

Royal Enfield’s are small bike in terms of other foreign options available offering a good machine in terms of performance, standard and most important price. The bikes have been in production from long enough and now the reliability issues should be ruled out. The new joiners TBTS 350/500 and cafe racer speaks volumes about the effort Royal Enfield is making in this segment. 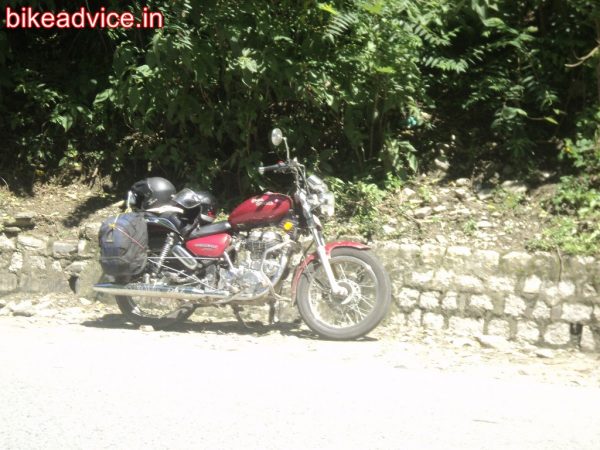 There have been lot many models with same 350 cc/500 cc engines on different chassis’ in recent years. A new product with new dimensions and larger displacement would be praise worthy I have heard of RE working on 700 CC engines on some portals don’t know how true the news would be. I don’t understand why there is disparity in the Royal Enfield’s models being offered in India and those being offered in Europe. The Indian market is heading towards performance oriented machines and it’s time to bring back the magic which the bikes like Yamaha RD 350 offered in the nineties even we can expect more in the coming years from potential Indian bike makers to cope up with the tough competition they would have to face in near future from foreign manufacturers.