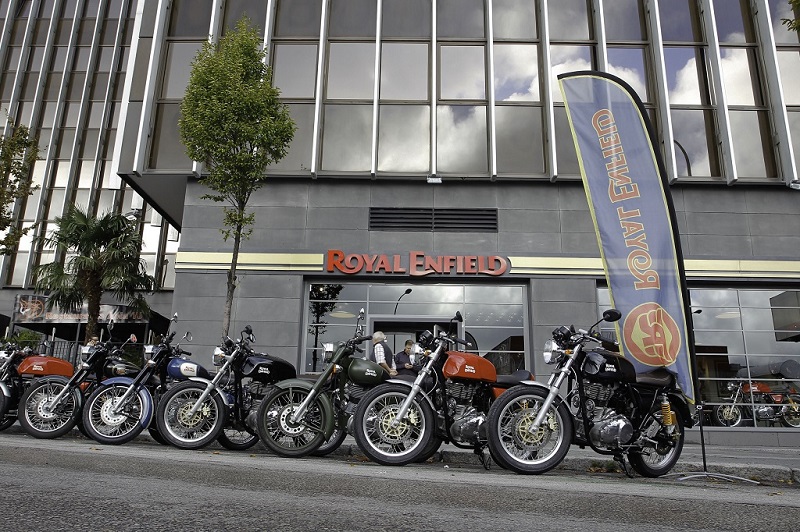 Royal Enfield, the oldest motorcycle brand in continuous production, has started spreading its roots in Europe. After the United Kingdom, the Chennai based manufacturer has opened their first exclusive store in Madrid and Paris. This expansion is a part of their attempt to reach the pinnacle of the global mid-size motorcycle territory which they define as 250 cc to 750 cc.

The company will aim to attract customers with an image of a brand which makes classic motorcycles. Royal Enfield also showcased their gear collection along with motorcycle apparel and accessories. Also present were their limited edition motorcycle range inspired from the Despatch Riders of the World War era (aren’t these limited editions over yet?).

The company sees France and Spain as very important markets for their brand. Here’s what Mr Arun Gopal, International Business Head, Royal Enfield had to say on the occasion:

“We have witnessed immense growth in both France and in Spain, which is fuelled by our close proximity to the customers in these regions through a wide distribution network and increasing dealerships in the past few months. Our evocative product range available at an accessible price point is what appeals to motorcycling enthusiasts in these markets. The exclusive stores are part a of Royal Enfield’s new retail strategy, showcasing our brand philosophy of ‘Pure Motorcycling’ in every aspect of the Royal Enfield ownership experience. The concept stores that draw inspiration similar to a living room of a motorcycling enthusiast has been designed to provide an immersive retail experience to our customers internationally.”

The Paris store is located at at 98 Rue Baudin, 92300 Levallois-Perret and in Madrid you can visit them at 29, Calle de Agustin de Foxa, Madrid.

In August, Royal Enfield took direct control of their US operations and launched a company outlet right in Harley’s home (Milwaukee). They also entered Indonesia with their first showroom in Jakarta. Things are moving at a rapid pace for the company and with the oncoming of the very interesting Himalayan, expect some fireworks….