Royal Enfield, the world’s pioneer in cruiser bikes is presently exporting bikes to about 29 nations from the Tiruvottiyur plant which is located in the northern suburb of Chennai. Presently, Royal Enfield has around 180+ dealerships spread across the length and breadth of India.  The company offers a variety of models catering to the needs of the traditional segments, the enthusiasts, the leisure bikers and the urban youth. 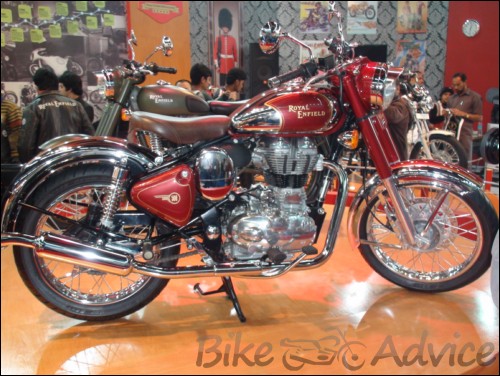 The growth of this company in the last 5 years seems very tremendous. Royal Enfield has now marked its strong presence from North America to Europe in the West and Japan to Australia in the East. 2010 was very important for Royal Enfield. Here is the reason for the same. It was in this year that Royal Enfield was ranked among top 10 selling motorcycle brands in UK in the 125-500cc category. The other bike makers here in the list included Triumph and Kawasaki brand. Also, after reviewing the available models at the Progressive International Motorcycle Show in New York in January 2011, Popular Mechanics ranked the Royal Enfield Classic Chrome and Bullet 500 among its Top 10 picks from the show.

The company says that according to its projections, Royal Enfield would contribute around 6% to its annual sales and find its presence in more than 40 countries around the world.  The Brand’s popularity can be gauged by the fact that Jay Leno, a popular star of “The Tonight Show” and “Jay Leno’s Garage” picked out a brand new Fuel Injected Royal Enfield G5 Black Deluxe to add to his collection. Mr. Leno’s new motorcycle was delivered by Mike Francovich of Royal Enfield of Los Angeles. Jay Leno is an avid automobile and motorcycle collector. He also had a widely popular internet show called “Jay Leno’s Garage”, wherein the Royal Enfield has been featured at. Overall, this has been one of the greatest triumphs in Royal Enfield’s success.

When asked about the growth in exports of the company, Dr.Venki Padmanabhan, CEO, Royal Enfield remarked, “Interest in our brand in developed markets such as the U.S., U.K., Germany, Italy, France and Australia stems from the desire for some to own a piece of history; a true British Single. When they discover that vintage styling can be had at an attractive less-than-antique price, the interest heightens.

Then, when they ride a Royal Enfield and are thrilled by the way in which their senses are engaged, they reach to find the rational reason to buy. There are many rational reasons now: close-by dealer and service, more reliable bikes with regular side shifting and quietly, more than 70 miles per gallon fuel efficiency!” “We are now figuring out the right brand and value positioning needed to appeal to the vastly untapped “developing country” markets that, owing to our success in India, we are well prepared to handle,” he added.