It has been quiet a while now that we have heard of anything form Royal Enfield, which obviously is a weird thing to hear. Sooner or later there are ought to be news from RE and this time around too the company has managed to get in to news by getting featured on the very famous Jay Leno’s show. The bike that was taken from the Royal Enfield’s portfolio to be featured on the show was none other than the Black Royal Enfield Bullet Electra Deluxe. The new motorcycle was delivered by Mr. Mike Francovich. On a side note, Jay Leno is none other that the host of popular TV shows “The tonight Show” and “Jay Leno’s Garage”. 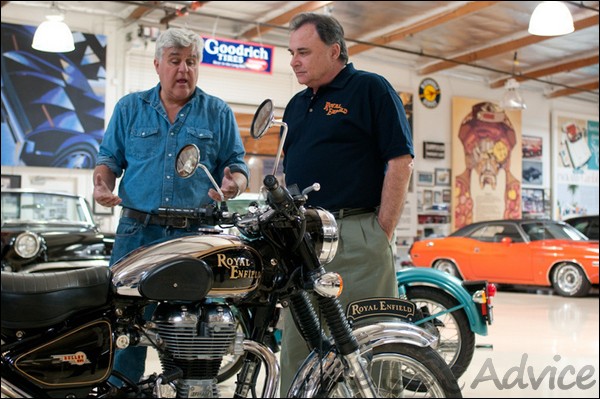 I would say that this is yet another great achievement for the company as it made a mark in one of the very famous shows on American television. This will definitely increase there brand image and goodwill. Now for the news; RE was featured on a show named Jay Leno’s Garage wherein a whole segment was dedicated on RE bikes. The show featured Mr.Leno’s Black Bullet Electra Deluxe, a Black Bullet Electra with Cozy Sidecar attached and Teal Green Classic 500. 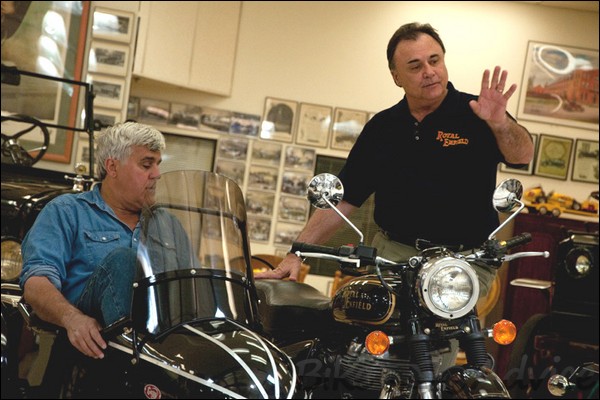 Mr. Leno looked much aware of the Royal Enfield’s bikes as he talked about the history of the company and also pointed out the advantages of the UCE/EFI bikes. Leno was supposed to take a ride on the new black bullet Electra deluxe and he did the same. After the short test drive he informed the viewers about his experiences and also credited the bike for its performance. 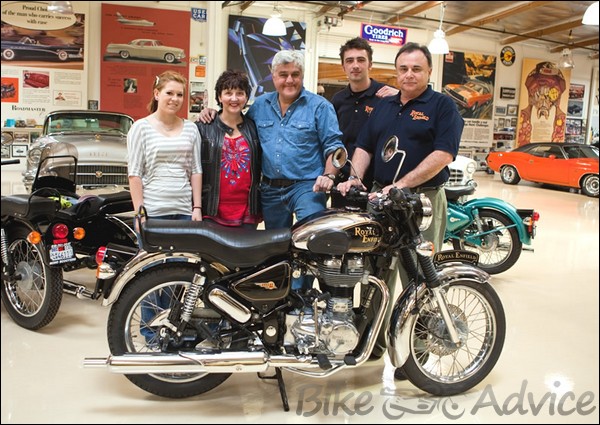 Jay is one of the most popular TV hosts of USA and his shows are watched by millions. He is also an ace automobile and motorcycle collector who collects automobiles for daily use and not as museum pieces. Overall, this has been one of the greatest triumphs in Royal Enfield’s success. At last we can only hope that RE continues its journey towards success in the near future.