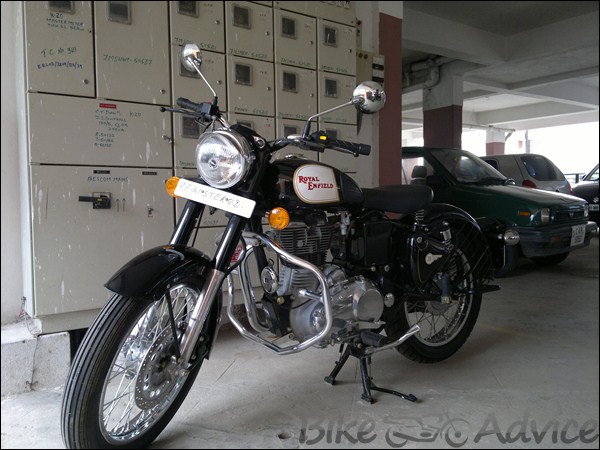 Hello Fellow bikers, It’s me again who wrote my first review on my CBR 250R now came up with my review on my roomie Chandru’s RE Classic 350. I am very proud to say that I dragged him to the world of bikers, and introduced him this master piece. Initially I was never attracted towards any RE and I never bothered to consider them as it was not my kind of machine. Am more attracted to Sporty than Cruising. It was yet another regular day I was going through blogs and previews about new bikes in India. 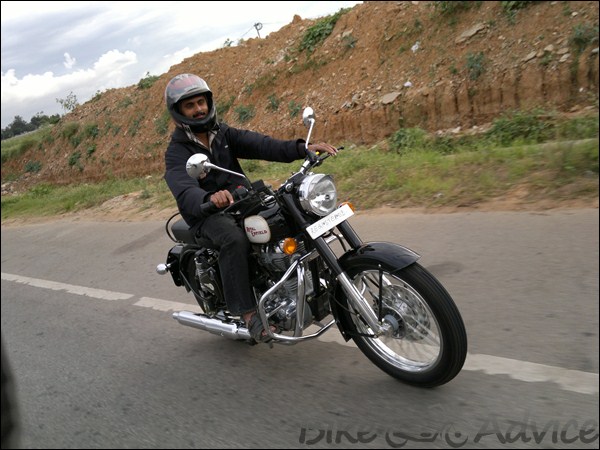 Suddenly I came across the launch of RE Classic series in India. I visited the RE site to see what is this new RE’s about. I would say I was lost at that moment. Totally mesmerizing beauty. I was never attracted towards any of the RE I have seen in my period until I see this legendary bike’s look. I still wonder, how this model changed my view on RE’s.

A great Kudos to the designer, who thought of bringing this heritage looking machine back with latest technologies. After seeing the look and specification I spoke to my Friend about this bike casually. It is must to mention that he prefers cruisers over sports bikes. But at that point of time he had a 2nd hand Fiero FX and never thought of getting a new bike. 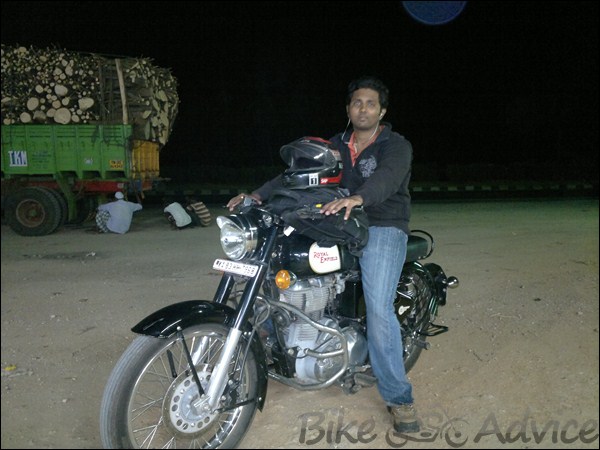 After seeking the bike’s snaps he too had fallen for it. He finally decided to go for it after couple of days, though it is quiet pricey and also ignoring the regular scolding’s he is going to get from his parents. He went to his native and spoke to his parents and brother about this and none was convinced to get a RE, as in their view RE is mostly used by big shots. They suggested him to go for some other brand if he wants a new bike. He saw couple of them but he wasn’t convinced either to move out of Classic.

Finally once he returned back to Bangalore we both went to the RE showroom for a test drive on 21st Jan 2010. We saw the beast facing us in flesh. It was a classic 500. What a beauty. We asked for test drive and they told they have only Classic 500 and not a Classic 350. We took test drive of Classic 500 for the bike’s posture and comfort and a Thunderbird for the engine performance which got the same engine.

Somewhat we both didn’t like thunderbird because of its riding posture. I must say, we were 100% satisfied with the performance as well, as we were already fallen for Classic series looks. He paid 10K in advance same day and booked it and was told a waiting period of 3-4 months. On-road price was less than 1.1 L while booking and after new budget announcement before delivery he paid 1.18L on-road. 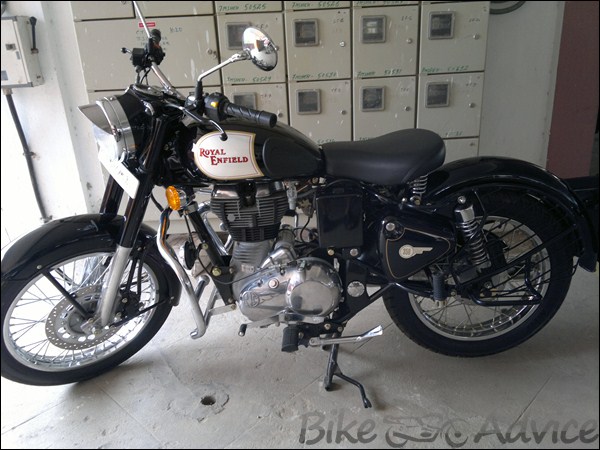 Like others, we used to call the dealer to find out the availability and delivery. RE never kept their words on delivery, they delayed, and promised dates couple of times and finally delivered only on 28th Oct 2010. Yes only after 9 months, after making 100s of calls, blasting them. He doesn’t go to office regularly in his bike because it is too far. It was mostly used by me and his younger brother, who is another roommate.

I will never compare this bike with any other bike, at least in India. It can be compare with few other bikes like ZMR, R15 etc. for the price range. But will that be fair? RE is entirely different bike when compared to any other bike available in the Indian Market. RE has its own market. It is Love it or Hate it kind of bike. It is not the one chose by many.

Neither people will get this just like other bikes. Only RE fans will buy this piece of art. RE got its own charm. People who don’t like RE’s, Trust me guys, u will have 2nd thought after u ride it. It will surely make an impact in you with its ride. I used it continuously for about 4 months while I was waiting for the delivery of my CBR. Now let me present you my observation about this bike. 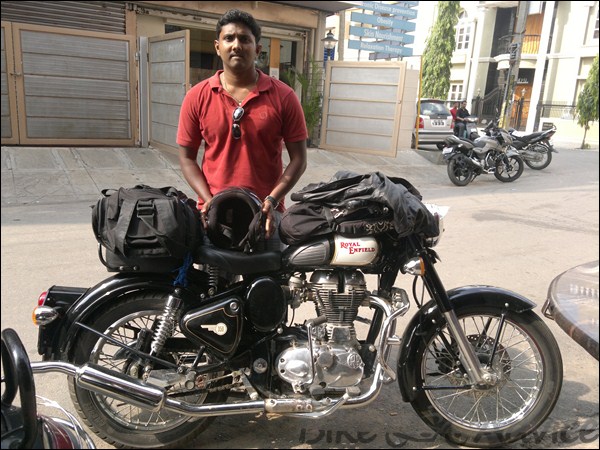 I took this bike for a small ride though the very first long ride, on 3rd day itself to Nandi Hills, which is about 65 Kms from our place. I kept it under 60 Kmph in run-in, same pain being slow running in run-in time. But I must admit that it was still wonderful. The great torque generated by its engine pulled the bike up the hill just like normal ride on city roads.

Later after run-in we took it to couple of long rides including Nandi hills, Chennai and Madurai. The most comfortable machine for long drives I must say. What a leisured posture, Widest saddles, Bike will not tend to go out of your hand even in 3 digit speeds. Its weight keeps it on road when you ride on any type of roads.

Even riding continuously for more than 100 Kms, when we stop for a break, we never felt as we had a ride in a 2-wheeler. And the pillion seat too, the most comfortable in the Indian bikes. This was confirmed by his mom, my mom and my sister too. Its short body and wider seat makes it most comfortable for ladies. This I could never achieve in my present or old bike. 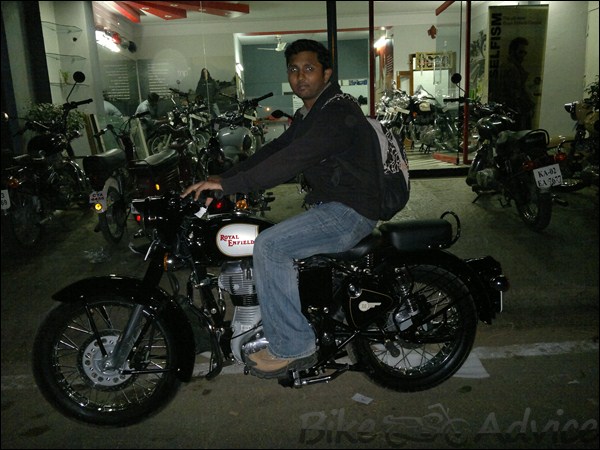 This is not a bike where you can feel the adrenaline rush, having best 0-60 neither best top speed. Still the way it carries you makes you fall for it. It is people’s dream, passion. It makes one feel proud to be owner of a RE. Once there was heavy rain it was a flyover construction site and people never dare to ride where the road was filled with water.

But being riding a RE, I took it; water was till the top end of the wheel height, and still the bike never felt that. It passed that stretch just like a normal road. That makes RE different from other bikes. At that moment I remembered a line I read somewhere. “Guys you can pull you bike fast; you can reach better top speed. But remember, I can go anywhere“

As others it got its own hitches. First and main thing is the waiting period. RE don’t keep their promise on delivery; neither have they taken it serious about their demand in market. Come on RE, there are lakhs of people dying for a RE, and it’s your waiting period which makes them move to some other brand. Don’t think everyone will wait for a whole year to get a new bike.

It is ridiculous. Same applies for parts too. And RE has to improve a lot in quality parts front. Many areas are prone to rusting. When one make a bike with lot of chrome, they should first think about how to avoid rust.

Now let me summarize the Pros and Cons of this beast. 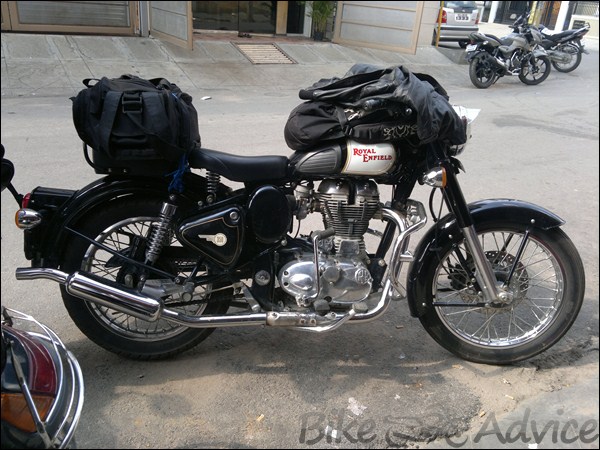 Though I observed so many cons about this bike, (even my friend admits too), he is very much happy about this beast. I would say even I am very happy after driven it for 1000s of Kms. I took it for rides even now too once in a while. One will never regret getting this beast. It makes you feel proud of a RE owner. My friend is a proud owner of this beast and if you have in mind to own a RE, Better don’t ask anyone. 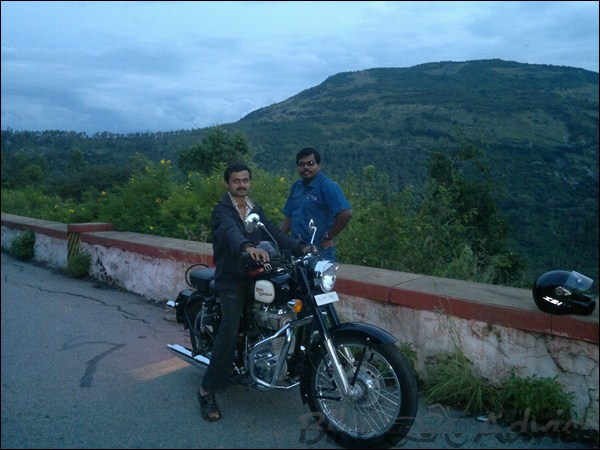 Go and book one for you. You will realize the feel only when you own one. This bike is not for the guys who seek adrenaline rush or who want to be the fastest or for one who is looking for a commuter. This is pride. Own one to get that feel. I know what will go inside one’s mind hearing 10-12 months waiting period. But trust me guys, the wait is really worth for such a classic piece of art.

You could ask me more thru’ comments if I have missed to cover any part in this review. Ride fast/ ride wherever you want to, but remember to be well within your limits and your bike’s limits. Wear safety gears. Have fun riding.