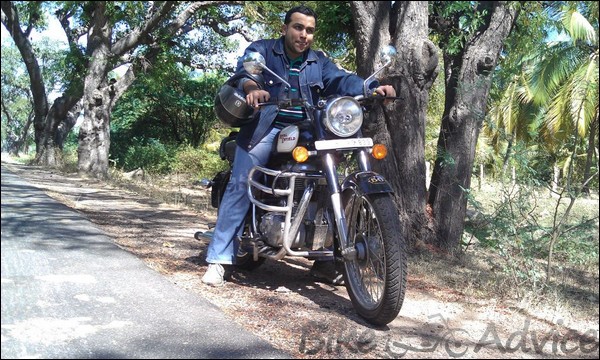 “Better Late than Never”! This was the thought that crossed my mind before I started this write up. Let me begin with an apology to all of you who’ve been eagerly expecting my ‘3000kms experience sharing post’. My Classic 350, meanwhile, has already clocked close to a 5000km mark. But I’m glad that I’ve delayed my write-up as I’ve much more experiences with my classic to share with you all. 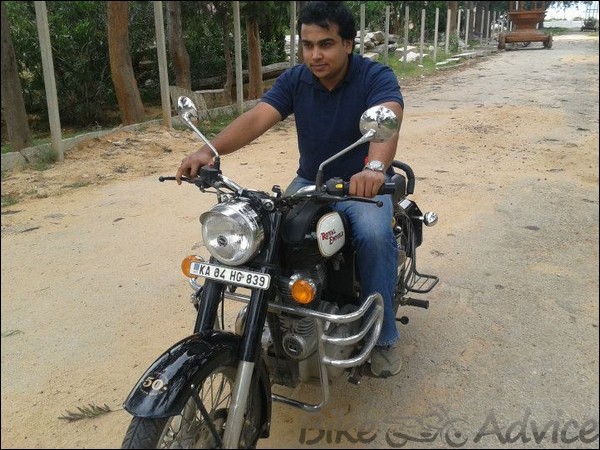 My Experiences with the Classic 350cc on the Highways

Well, let me begin my post with my experiences with the beast on the highways. Have done quite a bit of riding on the highways ever since I finished my run in period (had done close to 1500kms of run in). The first one was to the Himavad Gopalaswamy hills in the bandipur forest range at the fag end of the monsoon season (Ganesha festival 2011).

With my childhood pal at the pillion, the beast started off thumping my favorite notes as we moved to a place, at a time, on a bike, which made it an unforgettable experience. The hilltop was virtually immersed in clouds and the visibility was less than 10mtrs. This was where the headlight of the cl350 came handy while the ascent. 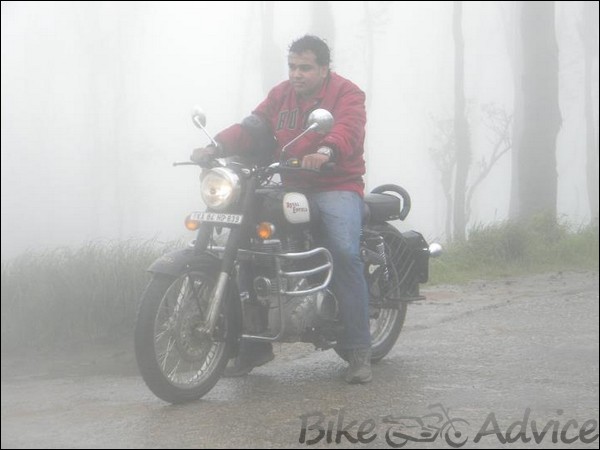 With its superpowerful 55/60w halogen headlamp, all hill descending vehicles easily noticed us and gave way. The temperature was very low and the wind virtually blew everything in sight except for the trees and the cl350. The heat of the engine gave us some warmth. The trip went off smoothly without any hitches and glitches and we were well served by my lovely beast! The bull seamlessly pulled us both with enough torque to pull another two people uphill!

Mileage: 34kmpl (was puzzled but concluded it was because of the treacherous roads, hill ascent and descent, rider and pillion with fairly heavy luggage bags, and the first highway ride for the beast).

The next trip was a 250km to and fro ride to a temple on the Andhra Border (on the way towards chithoor). The trip went off smoothly and the beast served us very well (myself and nephew as pillion). The experience has nothing much to speak of, as the roads were very good (part of the Golden Quadrilateral), and the trip was a short one. Two things which can be shared are, about me touching 95kmph mark for the first time and its feel at that speed, and the mileage.

Since it was the first time I touched the speed of 95kmph, the vibrations virtually started shaking my skeletal system. It was virtually impossible to handle the beast for more than a few minutes at that speed. The engine was yet to get used to for that speed! Will talk about tips of running in the engine at higher speeds later in this write up. The mileage was dismal again, 34-35kmpl in comparo with the city ride mileage of 40kmpl+.

The next one was towards chikkaballapur. A small 120km to and fro trip. Again the bull served me seamlessly and glided over the butter smooth roads (part of golden quadrilateral) at consistent speeds of 70-80kmph. The handling was great, very much controllable and easy to ride. The seating was quite good and it never felt like a bike (bullet is something between a bike and a car). This time the mileage wasn’t disappointing, the bull gave me a fantastic 45kmpl returns. 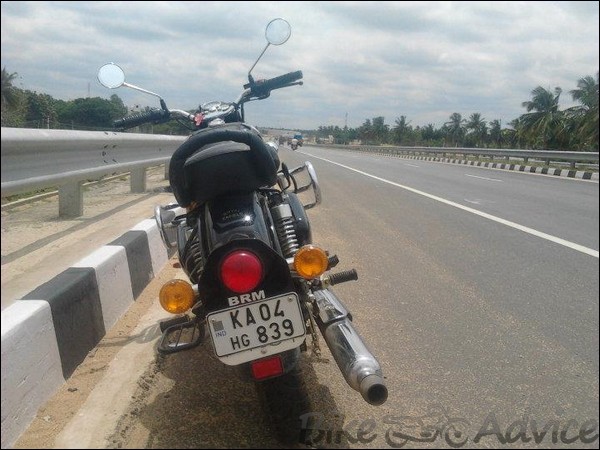 The final one was an unexpected surprise. Me and my friend were on a way to a temple in chitradurga district, about 180-190kms from my place (around 380-400 kms to and fro). While coming back, we unexpectedly entered chikkanayakanahalli forest range and we found ourselves riding up a hillock. The road upwards was very steep and the higher we went up, the roads went on becoming steeper up to an angle of around 50-60 degrees.

Towards the peak, the roads were gravel filled and slippery. But the classic was upto the challenge, easily climbing up the hill without much difficulty. Infact, it became difficult for me to keep under control, the awesome torque of the beast. It conquered the difficult terrain without even shedding a drop of sweat! The descent was a breeze with the awesome braking power of the bike. The brakes kept the mighty torque under control althrought the ascent and descent of the challenging terrain!

Here, while returning, on the highway, I crossed the 100kmph mark for the first time on my beast, but honestly, this bike is not for speeding and racing, it only for cruising (read:70-90kmph) and laid back riding. My sincere advice to all those who are interested in speeding and racing is to go for Japanese plastic bikes (no offence) and not a Royal Enfield.

The bike’s cornering abilities are good too, at the speeds of around 60-80kmph mark. The rear tyre is really good and gives awesome road grip on any kind of surface. Mileage was around 36kmpl, given the kind of terrain and the load on the bike. It was just an acceptable mileage!

Initially I was surprised on hearing that there was a booking period for getting the cl350 serviced! A minimum of a week’s advance booking is required for an appointment and the bike will be delivered only after two days! The staff members response was good (newbies visiting for the first time will not agree). As discussed in my previous post, some problems require repeated visits to the service centre to be solved (petrol tap leakage).

My second service was due at 3000kms (it was taken as the 3rd one as the number of days had exceeded the no. of days mentioned in the manual). Never mind! My bike was serviced and the cost was around Rs.450 (first service cost close to 800 including oil change). It was here I changed my bikes silencer from a long bottle one to a short bottle one, of course, at the showroom itself. It cost INR 1800.

The thump has improved when compared to the factory fitted one, but something inside me craves for a better thump. (I’ll never go for a Goldie or a Rocket as they are very loud and the bent one is not as good as the present one). Research still going on for a better silencer! The chain clattering sound is still an unsolved mystery and will have to get it solved at the next service.

There was a loose contact with the bike’s ignition system and the bike used to go off all of a sudden bang on the middle of the road! This was another mystery for which the service centre had no answer and this happened two times after the service too. Later on, I haven’t faced this problem again till now (touch wood). The Speedometer dial light has gone off all of a sudden and it comes on whenever it feels like.

This happened with the headlight too. Luckily, it has not persisted and the headlamp serves me well now. There was a post service telephone call from RE enquiring my satisfaction level regarding the service(after the second service). This itself was a surprise! Getting the feedback of the customer after service and that too by RE is surprising! (This never happened even when I purchased the bike or after the first service) Good going RE, We all expect much more customer care from you!

Experiences of City Riding and Mileage

All of you must’ve already read about the highway experiences of my bike (taking into consideration, the conditions), it’s time that the city riding experiences are shared! Once used to riding a bullet, it’s a breeze to handle the vehicle (not at the peak hours and bumper to bumper traffic) in the city roads. 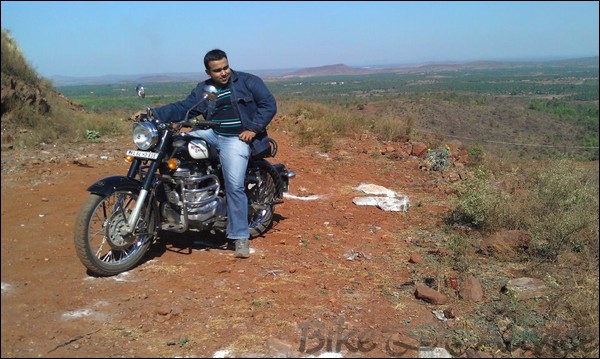 It’s responsive and full of power making overtaking a simple affair! Even a friend of mine, who owns an old bullet, was impressed with the refinement, smoothness and the power delivery of the twin spark engine! Coming to mileage part, the beast is light on pocket and wallet as it has been consistently delivering 40kmpl+ every time I’ve tanked up.

Mileage has ranged between 39.5 (worst) to 47.5 (best) given the kind and conditions of driving and the place where the fuel is filled (purity of petrol varies in different bunks). Once at a signal, a bike with two people on it, at around 60kmph, came and crashed (perpendicularly) into my cl350 (moving at around 30-40kmph). The cl350 just felt a jerk and jugged along, whereas the other bike (unicorn) fell down and the headlight assembly was crushed.
The Pillion was hurt and the bike suffered more damages elsewhere. If it were not for a Royal Enfield, it would’ve been me who would’ve been hurt. Such was the intensity of the crash! The cl350 stood like the “Rock of Gibraltar” and not a scratch on me or the beast! Even now, there are frequent queries regarding the Cl350 from curious onlookers at the signals, level crossings or wherever the Cl350 is stopped. Such is the aura of the bike. It makes the rider proud and feel like a king.

Tips on Riding and to Increase Mileage 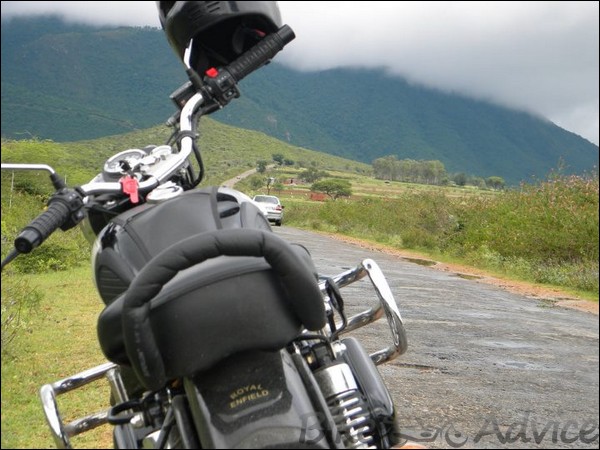 Finally, take care of your RE bike as all are not as lucky as you are! Not everyone owns a Royal Enfield and even if the thought comes to one’s mind to own one, it’s not easy to get hold of one (looooong wait period). Feel like a king on the road and also behave like one (being humble). Will meet you all in my next “experience sharing post”, till then, keep logging on to bikeadvice.in!