As Royal Enfield offered us an unconditional test drive on a line-up of our favourite machines, it’s time for us to rate the Bullet Electra TwinSpark 350. But before that we sincerely thank Mr. Praveen from Royal Enfield Chennai and Mr.Nagarathinam, Showroom Manager Coimbatore for their sincere and heart whelming co-operation. 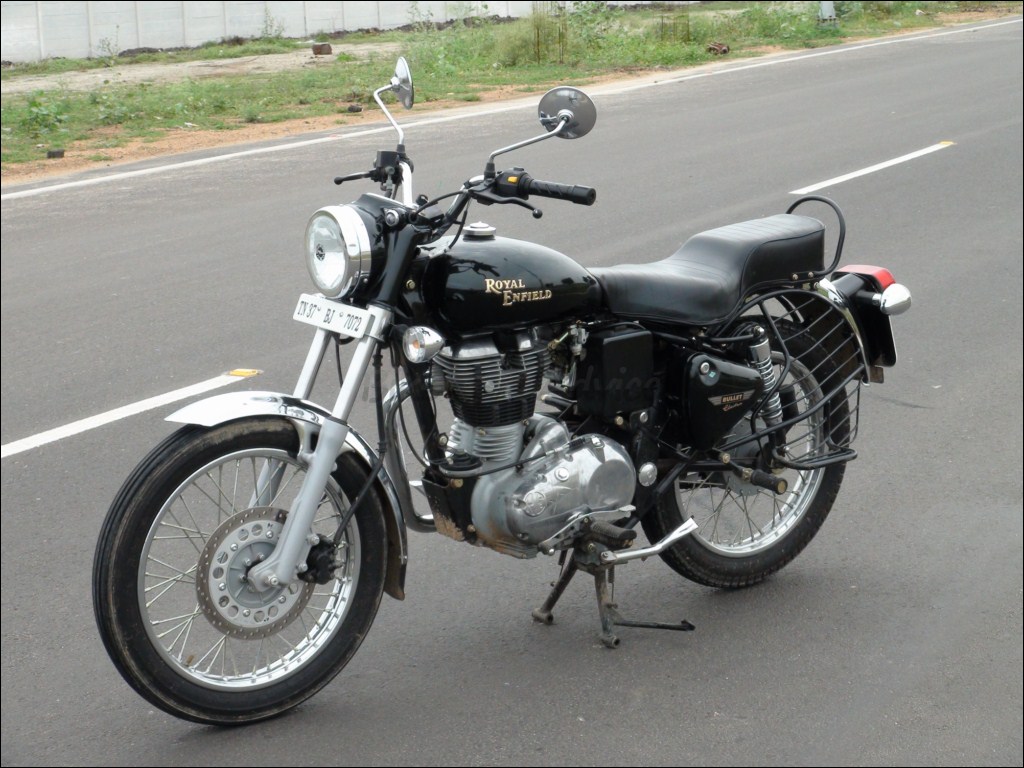 Royal Enfield Company was found in the year 1893, in Great Britain. The word “Royal” was added to company name in the year 1911, few years before First World War started.

By that time Royal Enfield was producing motorcycles with 225cc and 425cc V-twin engines. 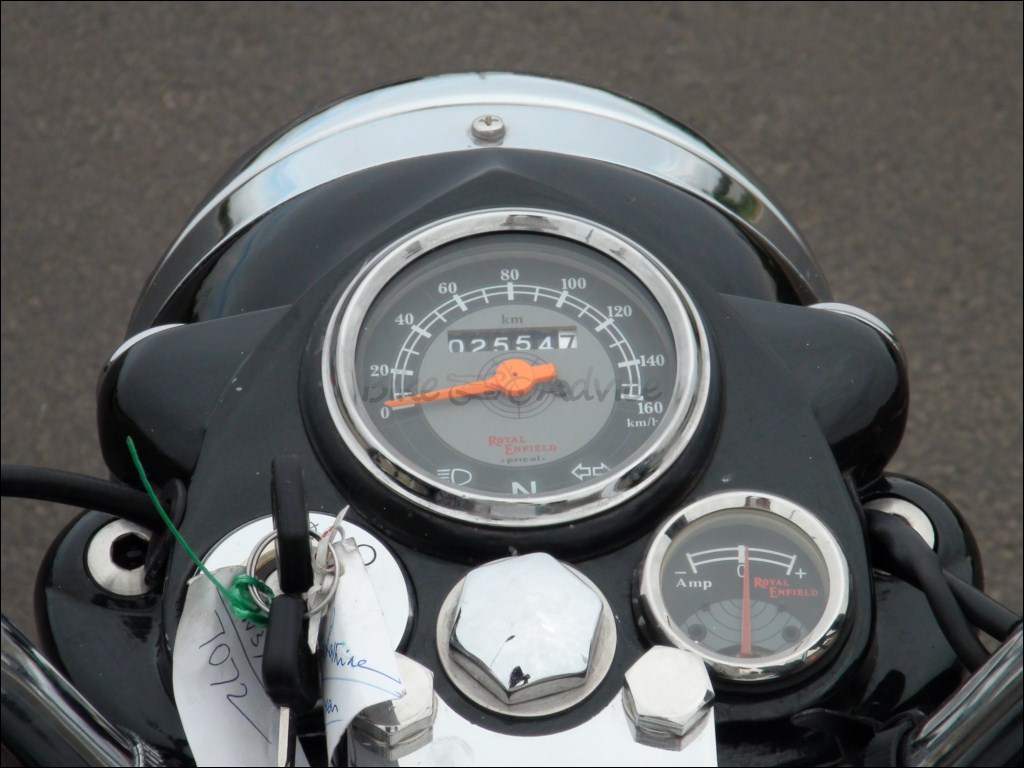 The most memorable model from next 20-30 years was the Royal Enfield WD/RE (Flying Flea) – a lightweight 125cc motorcycle, created to support soldiers in Second World War. The Bike had an engine that churned out 4bhp and maximum speed of approximately 60km/h. Another great motorcycle was post-war Royal Enfield Model G 350 – it had new telescopic front fork and great power at one’s disposal, while price was quite modest the bike sold like hot cakes. 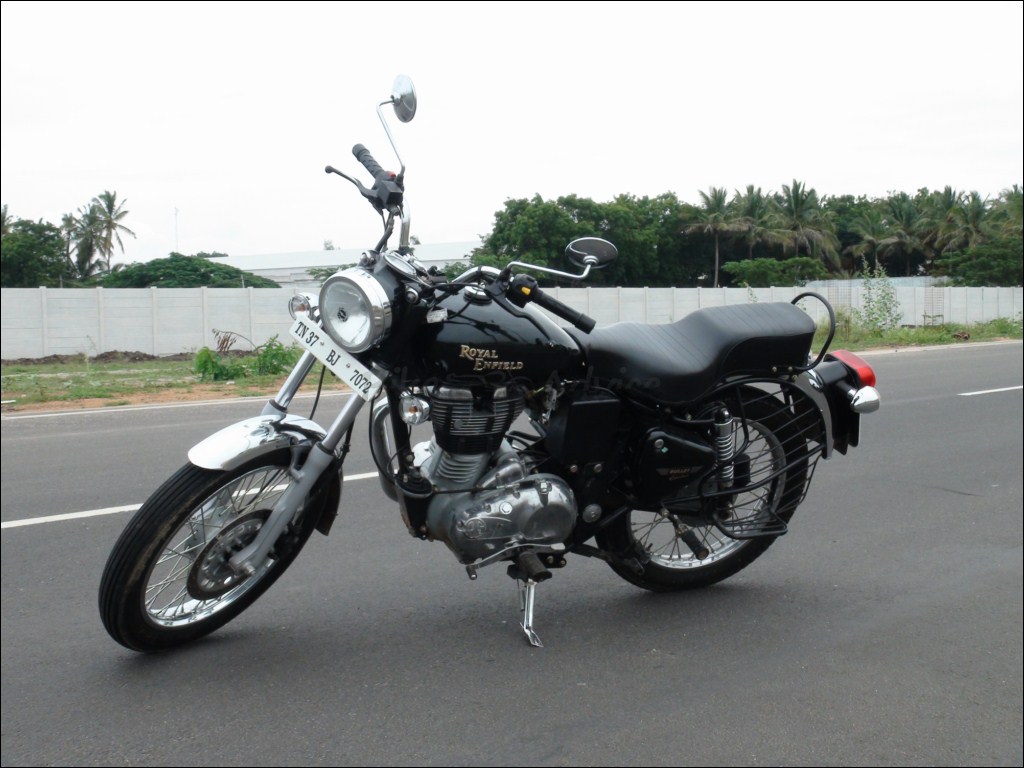 But of course most famous motorcycle of this company was Royal Enfield Bullet. It was introduced in 1931 for first time. Back then it was four-stroke, single cylinder motorcycle which had an optional engine size of either 350cc or 500cc. In 1949 several important changes were made to the bike, the engine became vertical with alloy head, compression ratio became higher. Frame also was significantly modified, while 4-speed Albion gearbox almost remained the same. This model was ordered by Indian army in 1949. In 1955 350cc Bullets was sent to India for assembly.

Finally, in 1955 Enfield Ltd. was created in India. It was independent factory which got license from Great Britain, and from that point Royal Enfield started manufacturing motorcycles in India, Since then Royal Enfield Bullet became a cult in India.

Now let’s hear about the newest version of the Royal Enfield Bullet – The Electra Twinspark.

The heart of the Bullet Electra is 350 cc air cooled, OHV; four stroke, single cylinder, twinspark engine that generates a stunning 19.8bhp (or 14.76 kW) at 5250 rpm and peak torque reaches 28Nm at 4000 rpm. The Bullet Electra is equipped with TCI (Transistor Coil Ignition), which older, standard model Bullet didn’t have. The TCI system is far more reliable and easier to start the motorcycle than the conventional type and also needs less maintenance.  One of the main points is that the older engine on Bullet Electra was heavier and suffered from power losses in transmission. 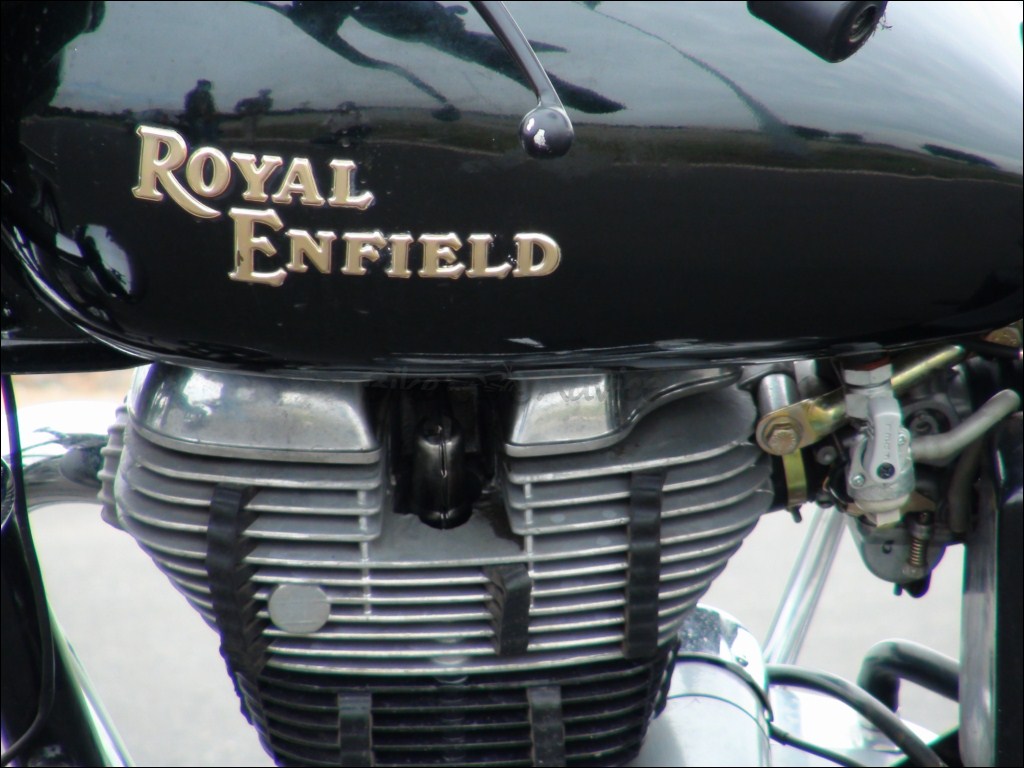 The New Bullet Electra TwinSpark doesn’t have those problems or they have minimized at least. Now engine is made from aluminum alloy, and weight of the motorcycle is only 180kg. Unfortunately, exhaust sound is not so powerful as its predecessor – the standard Bullet. It’s because Electra TwinSpark comes with the new glass wool filled silencer, which not only reduces noises and heat transmission, but also complies with Euro 3  reduced emission norms. But who cares about emissions, seriously? But if you badly need more thump, you can always choose several after market options for exhaust system. Compression ratio on the Bullet Electra Twinspark is 8.5:1 (same on Machismo 350) is pretty high.

The Engine feels very good and isn’t as lazy as it was on original Bullet. Now even first gear is pretty fast, and after reaching second gear real fun begins. Acceleration to 60km/h can be done in mere 6.6 to 6.8 seconds, which is much better. It was around 8 seconds for standard Bullet Electra. Power output is great, and more than enough to provide you with thrilling experience in the long straights. The reason for that is top speed, which is a bit more than 120km/h, and some exemplars reach even 125 km/h. Although it’s the speedeo indicated one, the true speed stands somewhere at around 110 km/h. One noticeable complaint is about torque which has been lowered by 4Nm and it reaches peak torque only in 4000rpm as compared to the standard Bullet Electra which reaches at 3000rpm itself. 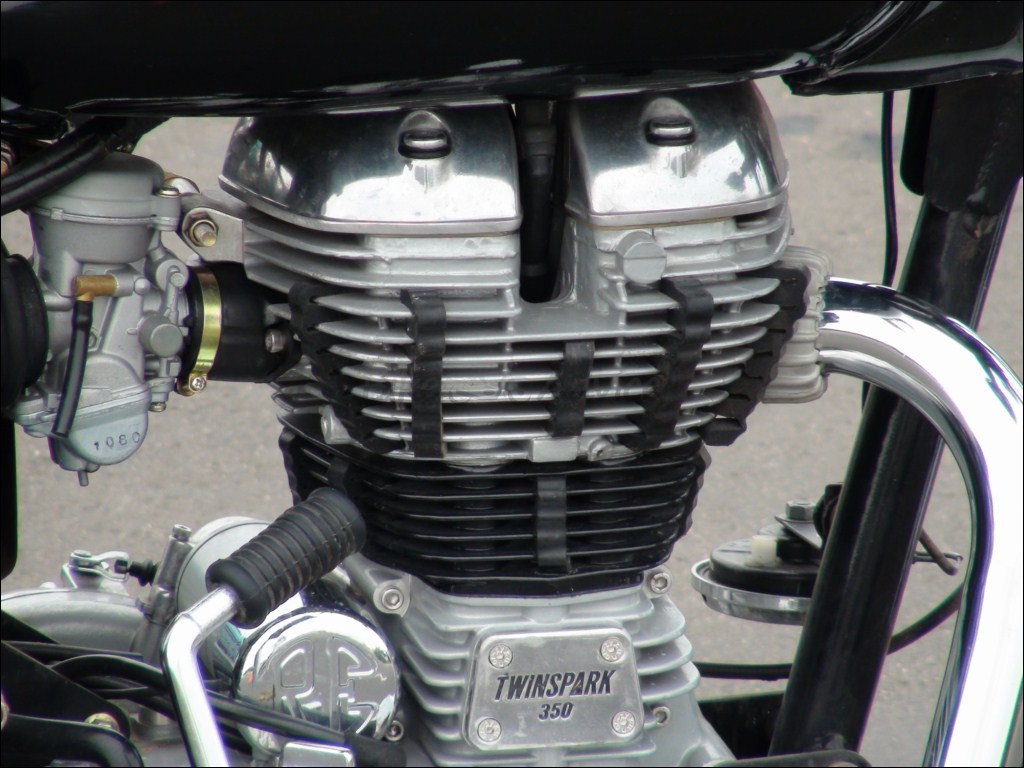 Talking about the new Transmission, the bike is equipped with a Constant Mesh 5-speed. Upshifting/downshifting feels good and smooth, and the power range  spreads out very evenly. With much shorter gear ratio it feels a bit like a sports bike. Now 5th gear is identical to 4th gear on previous model. Though there is a problem with this gearbox too, it is tricky to find neutral once the bike comes to a  halt.

Overall, I would say that Electra TwinSpark has much better gearbox than old Electra, despite previously mentioned flaw. Also, I think that new engine is solid and enduring, it showed no excessive vibrations (there is moderate vibration, which disappears at around 80km/h) and any oil leakage surprisingly. Starting the bike is easy due to electric starter which comes with a soild built kick starter too.

It is tough not to like the design of Bullet Electra. It has old-school, traditional look and simple clean lines. It is a classic motorcycle with gorgeous design. But let’s look at some details. Black finish is utterly amazing, quality is near to perfect and paint itself is very glossy. When you get very close than you can see that dust, and any fingerprints are quite visible on black finish, but from a distance it looks fantastic. 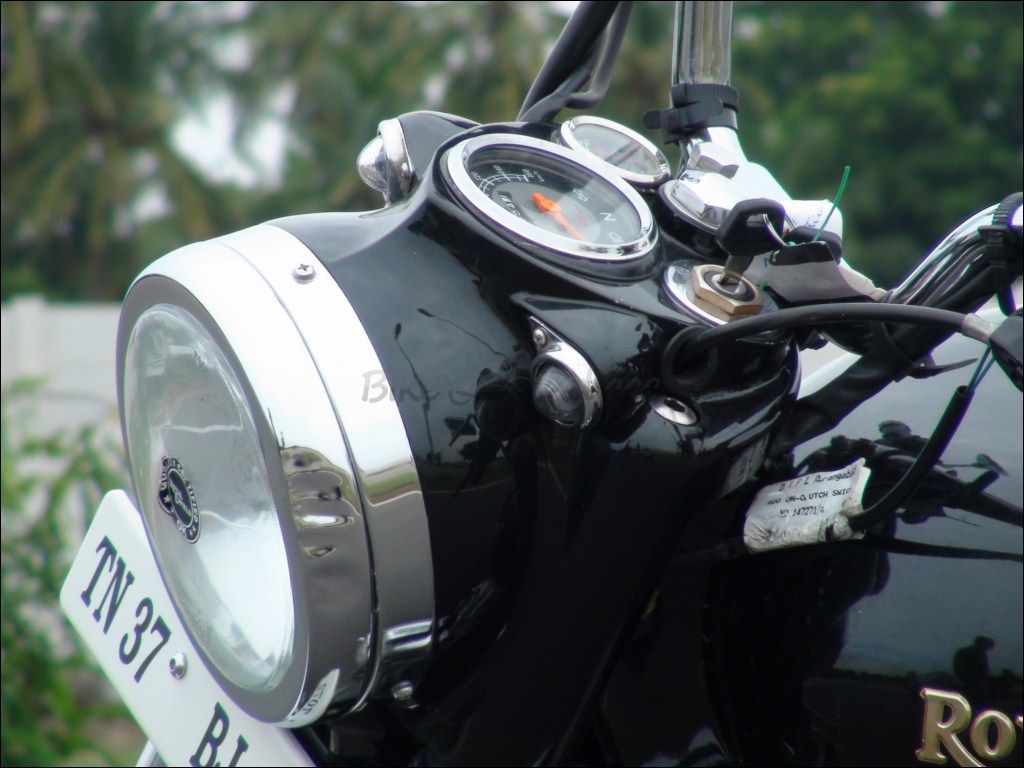 Also Royal Enfield Company logo looks quite spectacular. Chrome parts looks good and shining as well, definitely not cheap like on some other motorcycle brands. Engine stands out and has great effect on overall motorcycle looks, it has some sort of commanding presence. There were some very minor scratches on the paint and company logo, though.

Headlamp isn’t modified, but it’s still looks awesome. Turn lights in the front and rear carries clear lens now rather the boring yellow ones. Even minor details looks great, the speedometer color has been changed, seat looks flatter and have “Bullet” written on the back side. Also front disc brake and exhaust pipe looks great. 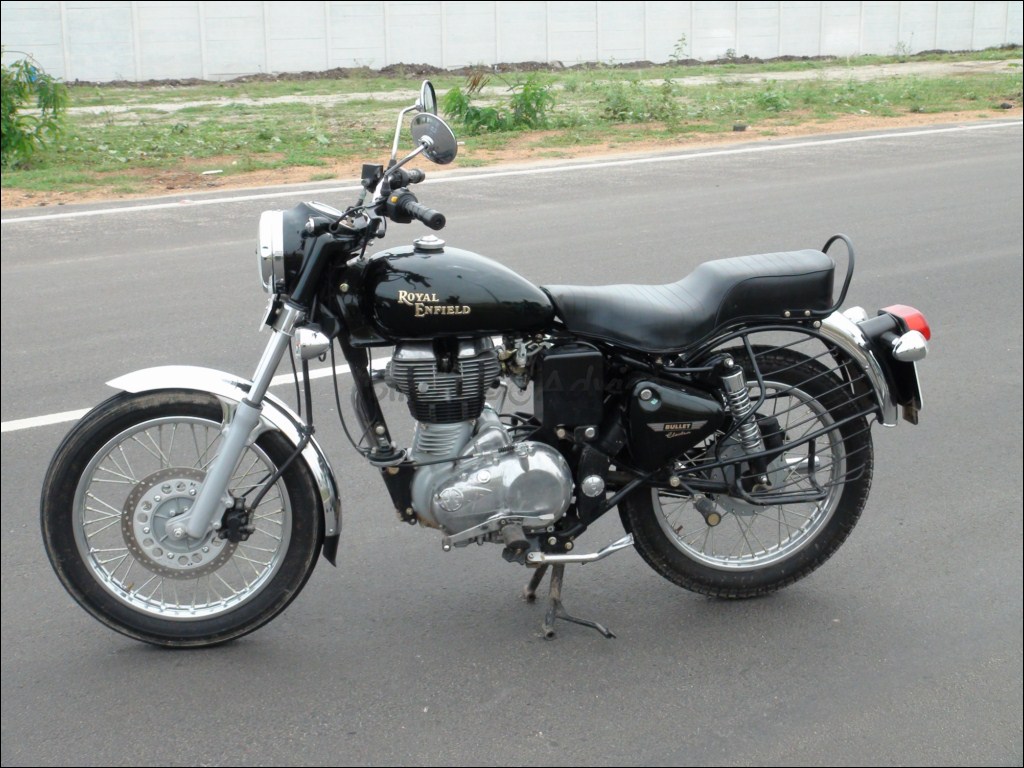 Build quality is improved greatly since standard Bullet model. All details are high quality, nothing looks cheap or like it will fall off any moment. So far no cables were cut,  bulbs fused, and it doesn’t look like something will give-off either. Also headlight carries a 35W, 12v halogen lamp which illuminates quite well and beam wideness is excellent. The tail lights seems to have improved too. 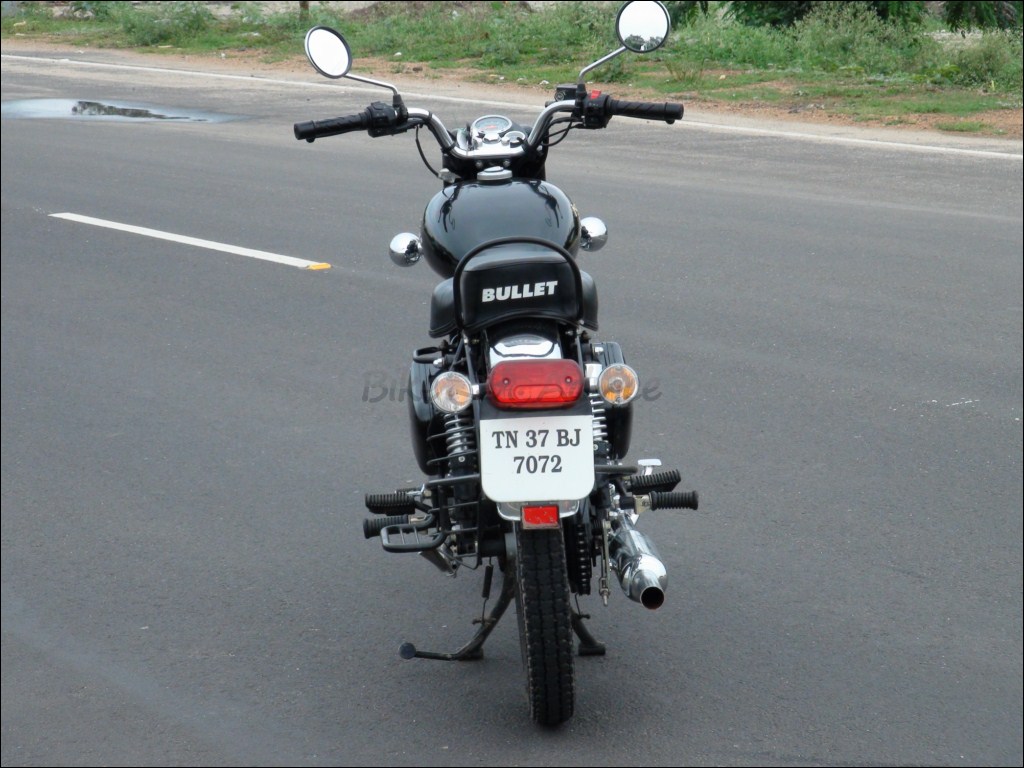 We were very pleased with design & build quality of new Bullet Electra TwinSpark; Royal Enfield did very well with that.

Well, I need to say that new stepped seat is better than earlier version, provides more comfort and has adequate room space for heavy or tall riders. After continuous & exhaustive driving hours, the  seat still felt decent and not very tiresome, unlike on old Standard Bullet. Suspension set up is pretty good, with the gas charged canisters at the rear that provides smooth driving pleasure in all kinds of roads. 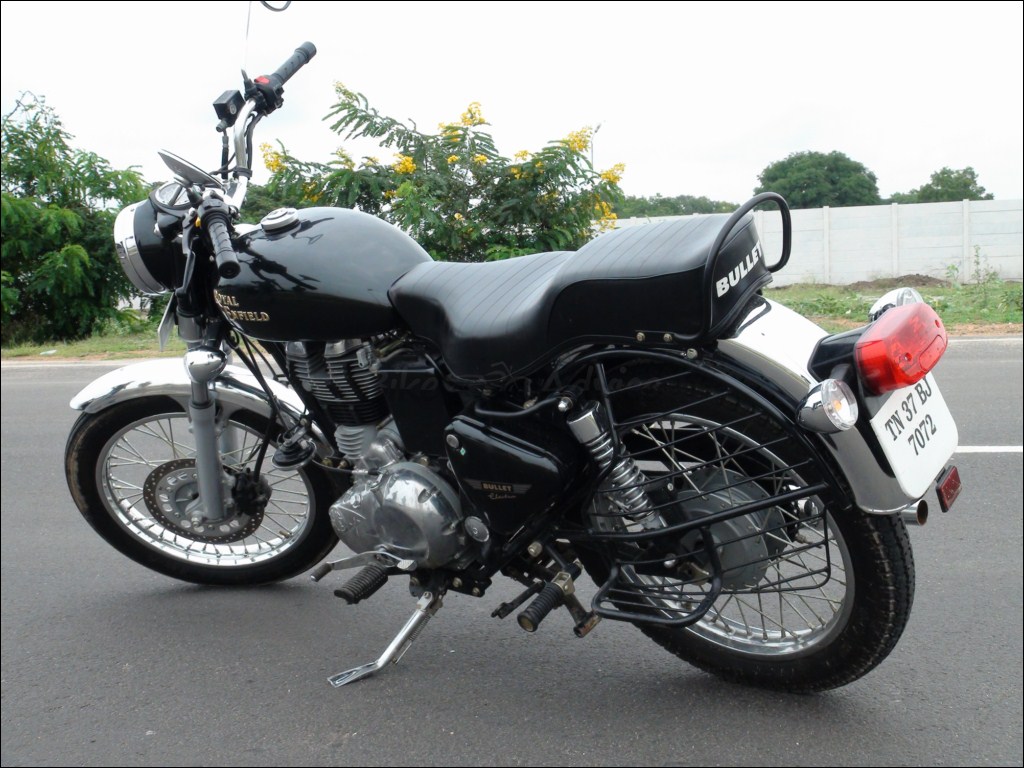 Bullet Electra TwinSpark is very stabile in straight lines, well it’s meant to ride it like that. The 19” rims and long 1370mm wheelbase ensures good balance and stability. Though cornering is another story. Bullet Electra feels lazy around corners, and while long sweeping corners are doable, sharp corners are definitely weakness of this machine. But that is the problem with most cruiser-type bikes, they are not crazy cornering machines, they need to be driven on the highway, not on the racing track. So it wasn’t disappointing I must say.

Overall, handling is not the greatest strength of this bike. But it is not a problem, maybe just mildly annoying fact. Comfort on the other hand is decent, can’t complain about that.

Brakes are powerful, thanks to the hydraulic 280mm front disc set-up, which is much better than old drum brake. Rear brakes remain the same with the 6” drum brake, but it works pretty well though. Now with these one  can feel very safe in any situation, either in the middle of high traffic areas, or in the highway. These brakes perform decently well. 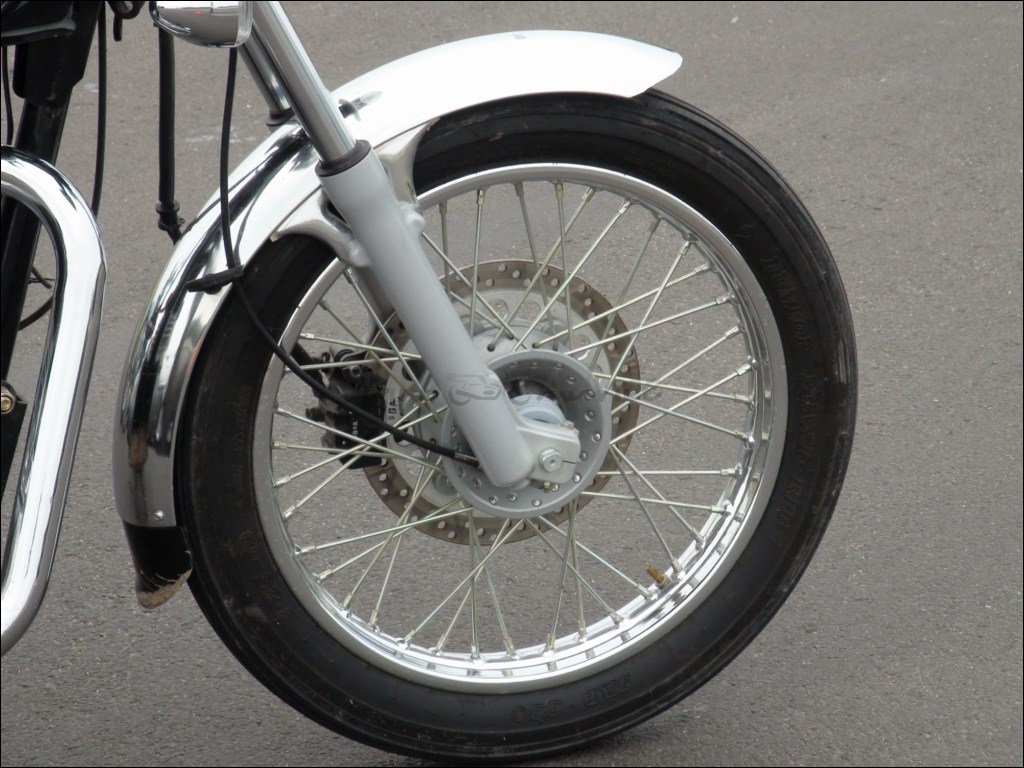 The Front suspension is hydraulically damped telescopic forks, stroke = 130mm. The rear suspension is swing arm with adjustable gas shock absorbers, stroke = 80mm. Suspension is fine and provides comfortable ride until you need to ride on the rough terrain, then it becomes a little jagged. But on the usual roads there are no problems with it though. Overall braking power on Electra TwinSpark is more than sufficient, and suspension is reliable and mild. Nice improvements have been made in this department.

Of-course mileage will vary depending on the motorcycle condition and one’s driving style, the average fuel consumption of Electra Twinspark is around 37-40 kmpl, though Royal Enfield claims it to be 51kmpl. With full fuel tank of 13.5 liters, Bullet Electra can be driven for almost 550km. Anyways Bullets aren’t made for mileage, many bikers are aware of that. 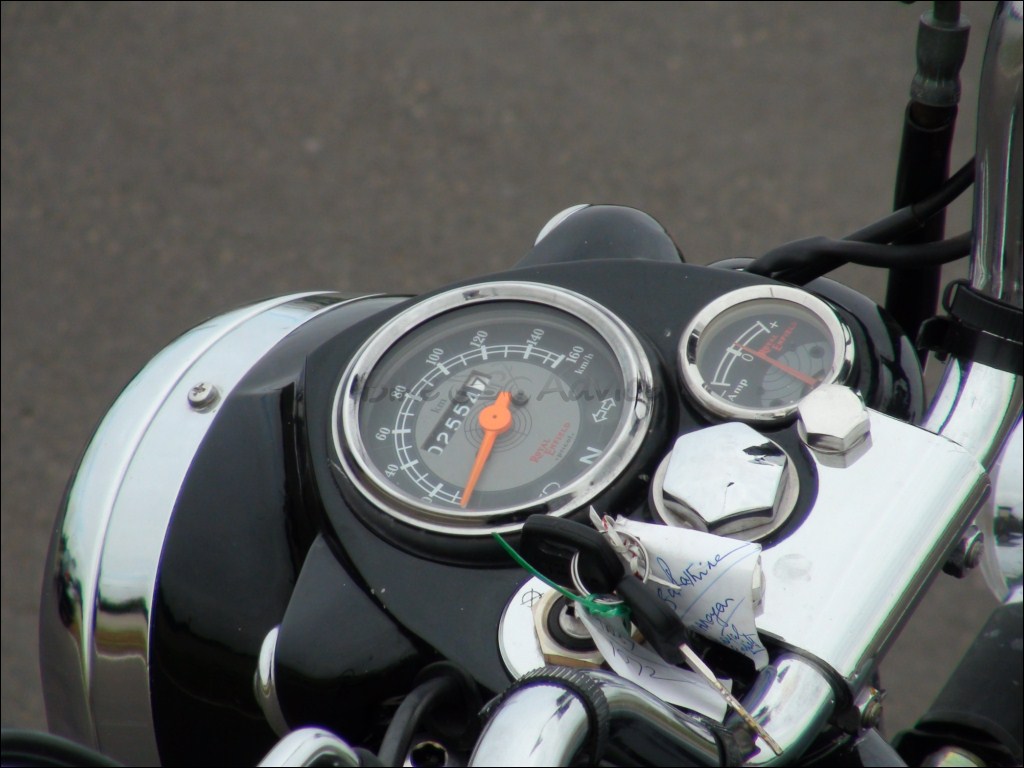 There are two different Electra TwinSpark models available – kickstart (KS) and electric start (ES). The bikes are available in three shades- red, silver and black.  The Bike offered by Royal Enfield was a gorgeous Black with Chrome tints  as you see. Ex-showroom prices of Delhi are Rs. 94.500 for KS and Rs. 98.500 for ES version accordingly. Ex-showroom prices of Chennai for the KS and ES versions are Rs. 89,846 and Rs. 93,846 respectively.

Although we were very pleased with changes in this new Electra. The older problems like 4-speed gearbox, limited speed and not efficient drum brakes as well as several other minor problems were resolved this time. 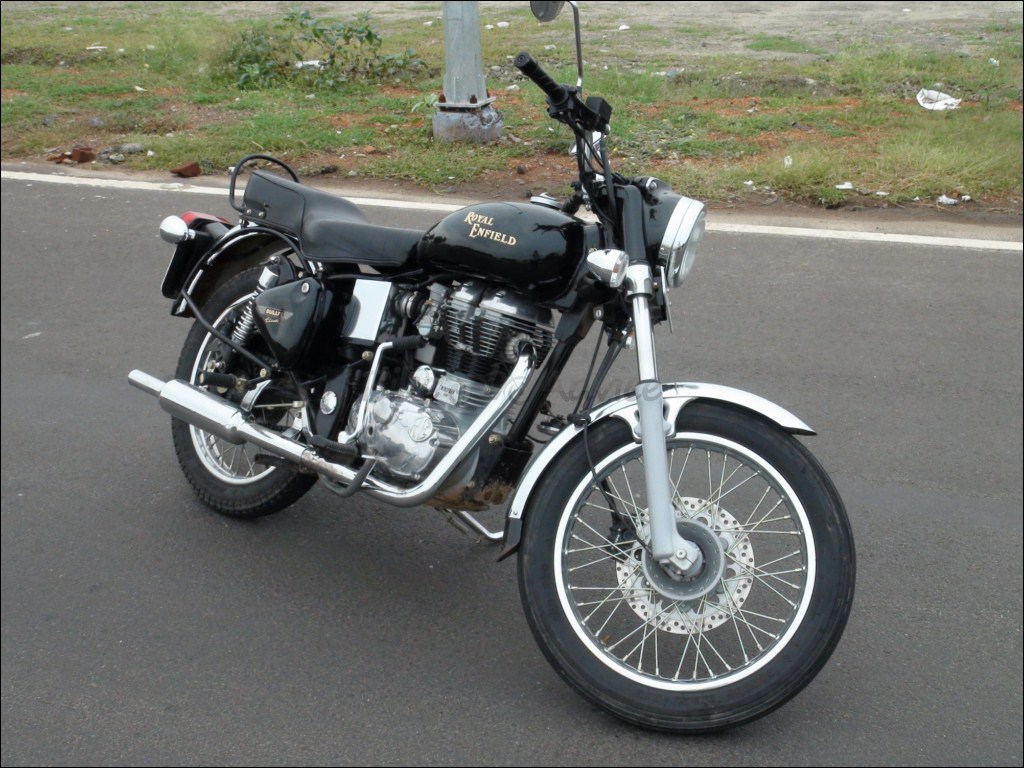 Build quality is better, fuel consumption is better, and even turn lights look better on Electra TwinSpark. Looks like the better has become even more better. Overall it is worthy bike, for the cruiser inside you.