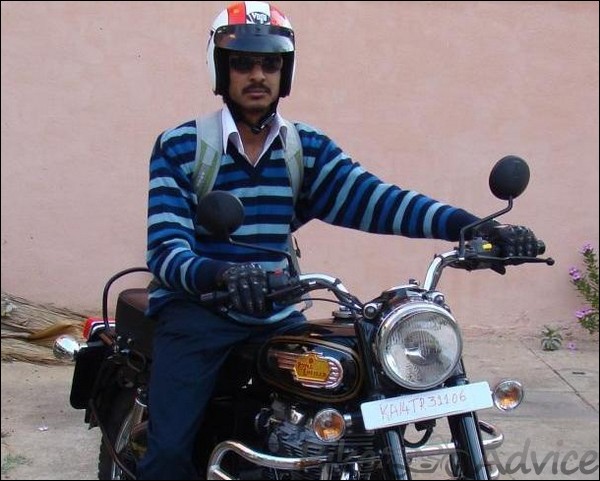 Hi everyone, I am Abhilash Bharadwaj; Just now completed my engineering course and I would wish you to join in my journey of my passion about bikes and specially Royal Enfield. I had written a review about my first bike FZ16 in the same site for the previous review and was also selected as the fourth best by the judges.

In this article, I would like to write a story rather than a review about my First Love, a legendary machine which is ruling the streets for over many decades – The Royal Enfield – Bullet 350. Passion about Bullet and how I became a owner of a Bullet. The urge to ride this legend was over many years even before I knew it was called a Bullet.

As I was happy riding the Japanese bikes for over 7 years, I got an opportunity to ride this monster in Goa when I was on a college trip. Two of my friends along with me hired Royal Enfield bikes for a day and this was probably the point I fell in love completely with this machine. That was the day I decided that further if I ride a bike it’s gonna be a Royal Enfield. 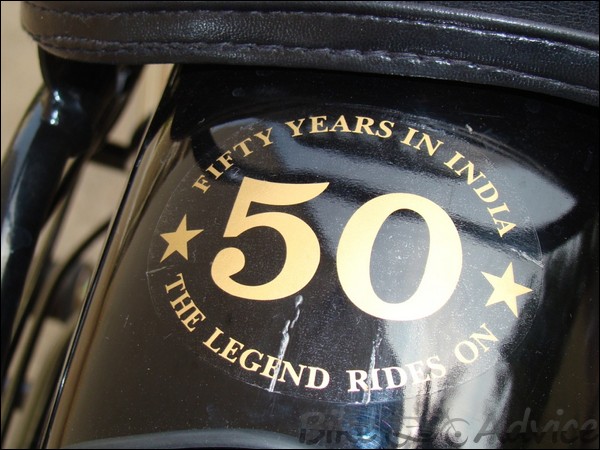 Along with this, a video named “Riding Solo to the top of the world” by Gaurav A Jani was a great inspiration for me to own a Bullet. The bike which I hired was a 2009 model STD 350 which had a right foot gear shift and it took me time to get adjusted to this pattern. I was amazed with the performance of the bike and its capacity to pull up to 50kmph in 2nd gear.

Once I came back home I started to speak fulltime about the bike its performance and comfort and my parents were fed up of listening to the same story again and again. Finally after convincing them for over a month they agreed to get me a Bullet. Now it was my turn to decide which bull to buy. I decided to go for a 350cc itself as I have plans to do lot of touring and it needs to be economical on fuel. 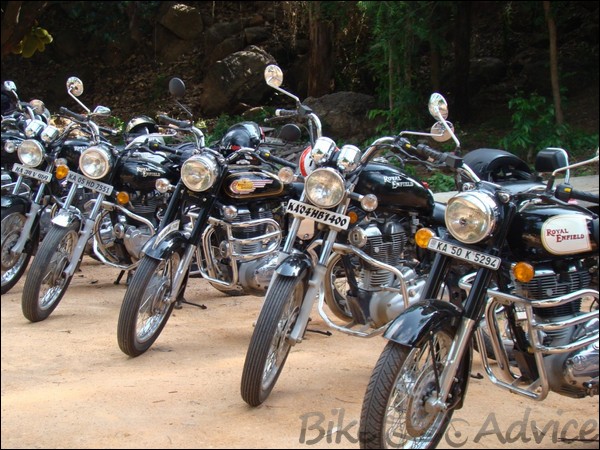 As this plan of getting another bike was just for the sheer passion and not for any purpose, I did not have any other options than Royal Enfield and I have observed that people who decides to go for Royal Enfield out of passion will not even compare tech specs of other bikes or do research on fuel economy or even the maintenance cost. In this regard Royal Enfield is a competitor for itself and none others are in its league. 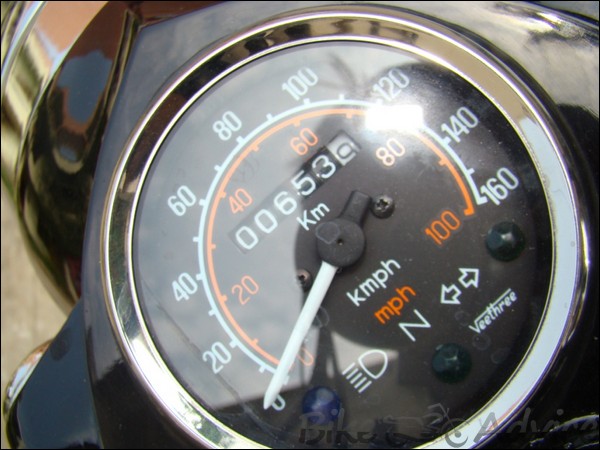 As all 350cc Royal Enfield’s run on the same engine, I did not have much to worry about. Finally my dad booked for a STD 350 on 9th of November 2010 in Shimoga in his friend’s showroom as he promised to get the bike within 5 months. After a painful waiting period of 4 months (thank god I got the delivery 1 month early) I got my bike on 7th march 2011. I got it packed and loaded on to a train and finally got it to Bangalore. 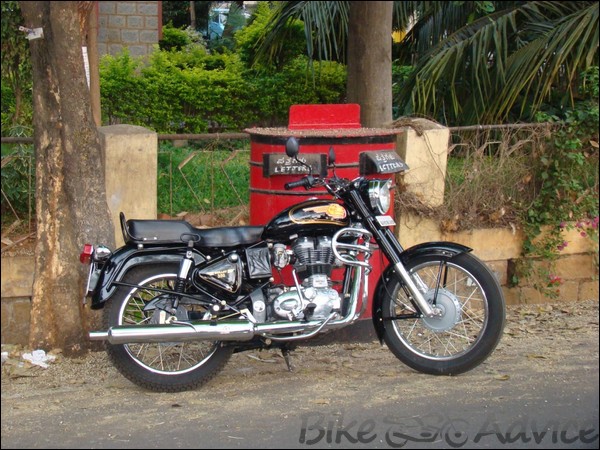 I named him “Hermes” which means Greek god for travelling. From here on I kick-started the most exciting journey of my life with my faithful and trusted companion a 350cc 4-stroke motorcycle. This bike made me realize that one could also fall in love with a machine and have a bonding. Let me not bore you further with my story so let me speak about the bike, its performance, positives and negatives in brief. 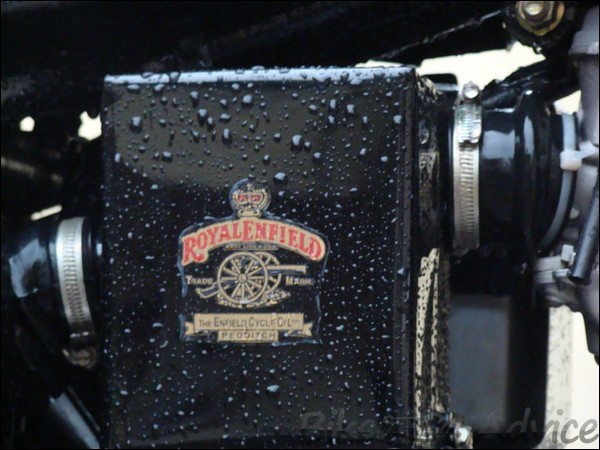 What one may dislike

It’s not a bike designed or upgraded periodically with the changes in the market or the customer taste. It has the same frame and same finishing as it was a few decades ago but still maintaining the presence in market because of its classic styling which takes us back to 1970’s. The badge on the tank looks great. 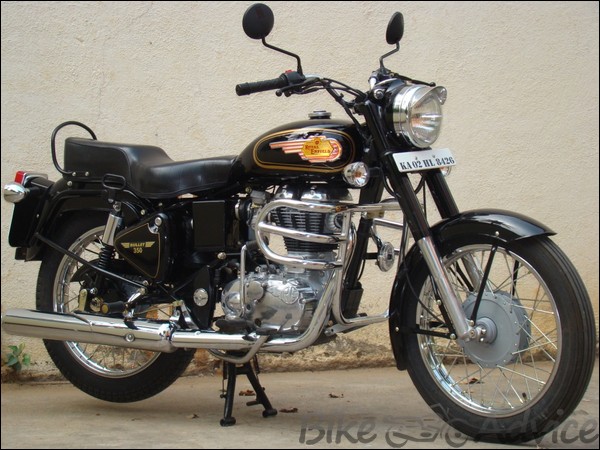 Initially I faced questions like is this model still available in market including from the RTO who registered the bike, as it is not sold frequently now a days because of its drum brakes and kick starter many people prefer for other models in Royal Enfield. “Handcrafted to perfection”, the paint work done in the tank is by hand and gives it a touch of elegance. 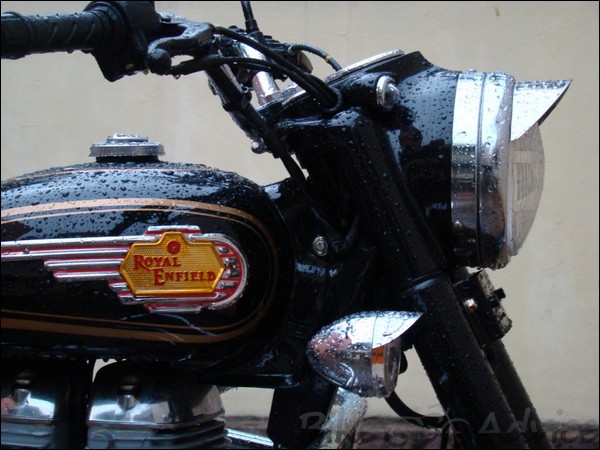 “God did not create metal to make paper clips and plastic to make bikes.!”. It should be the other way round. This logic is followed by Royal Enfield, it has a sturdy build in which plastic is used nowhere apart from mirrors and indicators. One would feel safe when on a Royal Enfield. 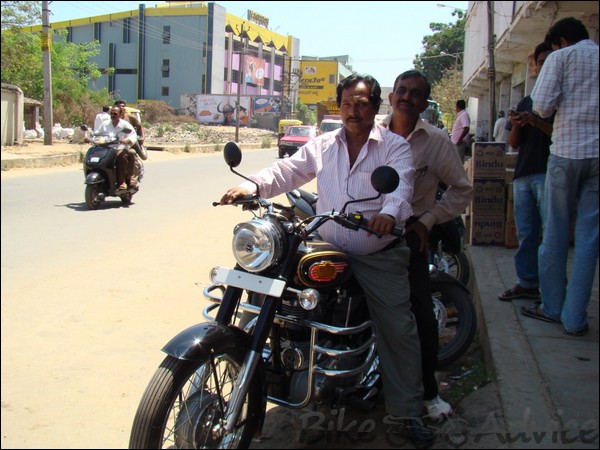 This probably has the best riding position which is balanced between highway riding for long distances and trails or off-road. This makes the riders prefer a Royal Enfield to ride in the highest motor able road at very tough situations in like Leh and cross other passes. “When going gets tough the tough gets going”.

There is no need for me to explain about the power of the bike. The new UCE provides a power of 19.8bhp and a torque of 28Nm. The new engine has better acceleration and provides a stable cruising at 60 miles an hour. 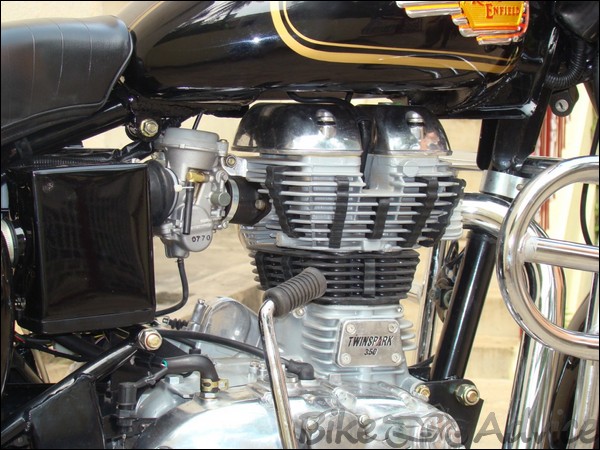 One should know it’s neither a commuter nor a sports bike and know the behavior of the bike and how it needs to be handled. It is the only bike which demands Respect apart from fuel.

The purpose of going for a Royal Enfield is touring, there is no fun riding a Bullet in city traffic like a commuter. One has to tour on this bike to explore its strengths and the highest level of comfort which it provides for the rider and also pillion. 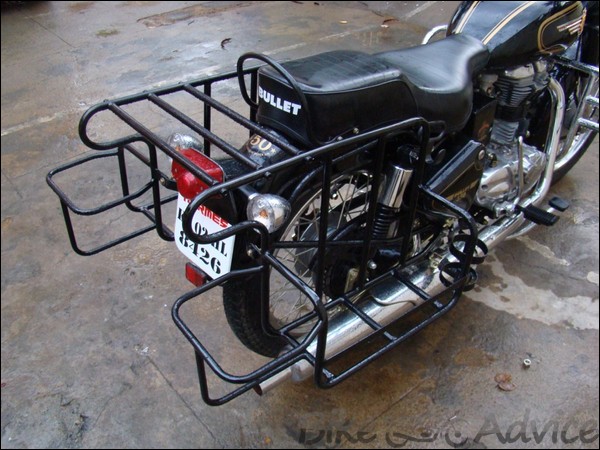 It can carry up to 280kgs of load including the rider and pillion and with proper adjustments can carry luggage enough for a month of riding including tent and other equipments.

The purpose this machine was built was for military by Enfield during the world wars. Till date, Royal Enfield is supplying this machine for Indian Army and other defense organizations. So I need not tell how much this bike is suitable for trails and its tough frame with a sturdy build gives confidence off roads. To other bikers other than Royal Enfield: “You can go faster but I can go anywhere”.

As Royal Enfield Bullet 350 does not have either disk brakes or a self starter as a option, people riding other bikes may feel little uncomfortable as they have adjusted for lot of comfort on their plastic bikes. It is huge bike which is 7ft long and a wheel of size 19” and a weight of about 180kg with fuel and oil make handling for new bikers a difficult issue and one may feel it not practical to ride a Bullet in city traffic. 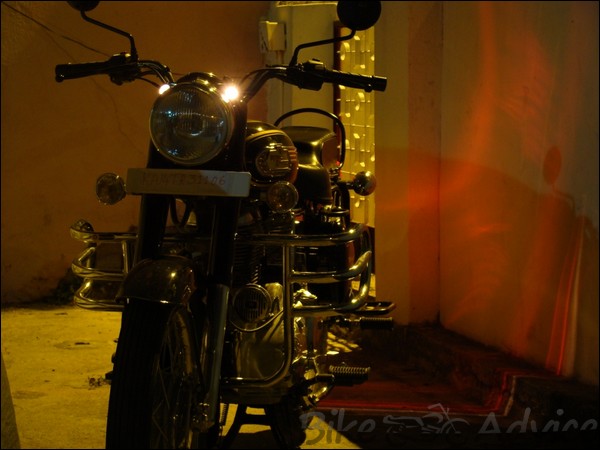 Maintenance of RE bikes as observed has been high and one need to care about the bike like a kid and cannot just ride it and forget it. Cost of maintenance has a great issue with Royal Enfield but now they claim their new engines are better in terms of maintenance. UCE bikes lacks in Thump provided by the old cast iron engines.

There is no need to advice any Bulleteers about his riding style or skills as all the Bulleteers would be matured enough in their riding style unlike other bikers with just enthusiasm. “Boys ride toys, men ride Bullet”. 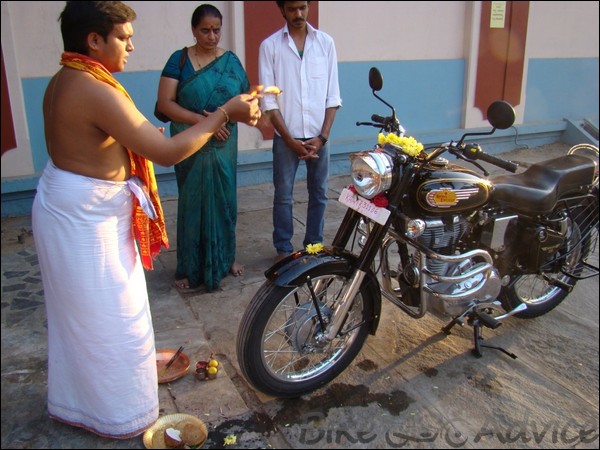 For people who are thinking to own a Bullet; go for a Royal Enfield only if you have passion for a Royal Enfield otherwise it may not be a pleasant ownership experience. All the owners would have faced lot of problems but their passion which is tons greater than problems have made them keep their bike even for decades.

Other bikers may feel Bullet is a piece of crap in a outdated design but only Bulleteers or anyone having passion towards a Bullet will know how one truly feels when he is on a Bullet and on the road leaving the crowds behind. In this bike I have traveled very little of about 1700km in these 3 months. 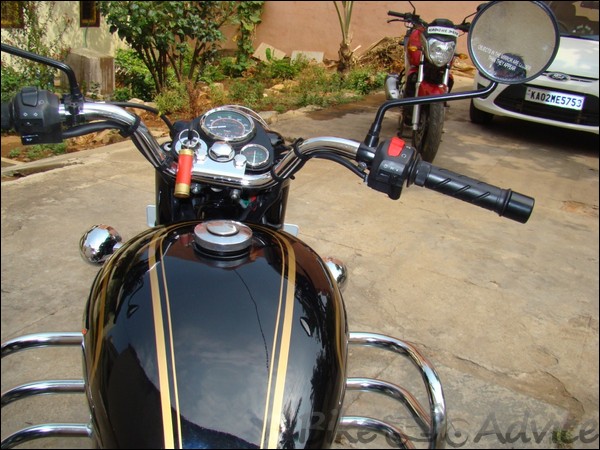 I am a part of Royal Indians Enfield Owners Club and have done few short rides. But I can assure that it’s a great machine and one would truly enjoy every minute spent with this bike. Hoping to do lot of touring and trails on this bike, I would like to end this review by sharing a quote. “Only a biker knows why a dog sticks his head out of a car window”.

Before finishing off this review I would like to thank all the people involved in production, design and maintenance of this Legend, all the workers in Chennai plant for giving us a great machine “Royal Enfield”. I am proud of being an owner of the oldest existing motorcycle brand in the world. 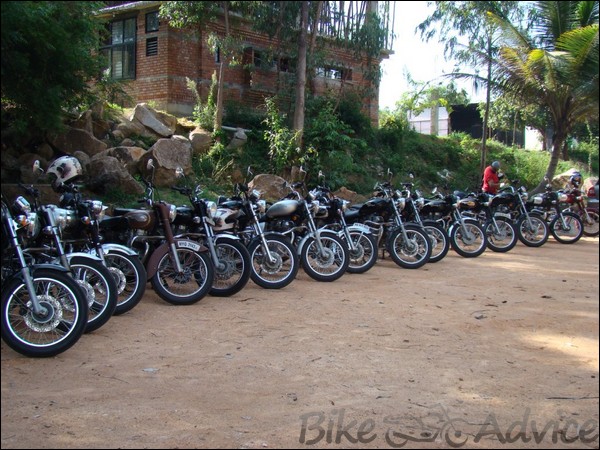 “Biking is not all about speed; it’s about Passion, Respect, Love. And sense of Freedom”.

I would like some suggestions from all the readers especially Deepak Raj about any improvements which can be brought about.

I would look forward for all your comments and suggestions. Ride safe, Ride Royal.