Valentino Rossi is probably one of the greatest names of grand prix. The ace rider is happy to have returned to go big in the Catalan Grand Prix. He claims that this event is and will be his first choice. Rossi hopes to bring back his momentum and cheer his fans up in the upcoming events. He missed out at the last years Caltan Grand Prix due to his broken leg but claims to have won some great races during the event and thus this time he hopes to make it big. 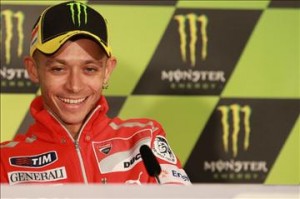 There are a couple of reasons that makes this particular race event Rossi’s fav and they are; firstly the city where the event is held is Barcelona, secondly the track is good and finally the stands are going to be filled with great enthusiastic supporters.

Rossi is really looking forward to the day of action as he said that there are many memories attached with the event of which the recent was the race with Lorenzo in 2009. Last year the seven time world champ was forced to watch the action from his home but this time he is all set to rumble.

Rossi bagged a not so happening 3rd place in Le Mans, France after Honda riders Dani Pedrosa and Marco Simoncelli collided ahead of him. He admits that there is lot of work still to be done to the GP11. Speaking on his bike he said that there is lot of work to do to improve the bike’s performance. Rossi said that they are trying to go as closer as possible to the front. Speaking on the plans for the future, team manager said that the whole team is motivated and they are looking to recover pretty quickly. He said that the bar has been raised and everyone has to make some obvious adjustments to outperform.

All in all, Rossi along with his team were really happy to return to Catalan Grand prix. Team member Nick Hayden was of the opinion that any race in Spain is huge and this event is no exception. Overall the team was high with new aspirations and hopes looking to nail down their competitors.