Greetings! Just the other day we at Bike Advice rolled out a post on Rossi’s happiness to return to Catlan grand Prix. Rossi who has joined Ducati is taking time adjusting in the team as he finished in the fifth place. Moreover the race was not that exciting either because Stoner emerged as a clear winner without being harshly challenged by anybody on track. 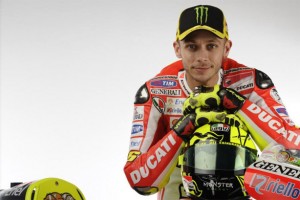 Rossi has always loved Spain and the Catalan grand Prix but he seems to be taking time to improve both his and the bike’s performances. In the last post we told you about how he was trying to modify the racing machine to get better results out of it. Though Valentino Rossi bagged in the fifth spot, it would be great to know that he finished the race just with a margin of 7 seconds behind Casey Stoner. The modifications made to his racing machine Ducati Desmosedici GP12 seemed to have worked pretty well for whole of the team Ducati. The bike sported a new engine altogether with a revised crankshaft that helped the ace rider grab the fifth place.

The day of race saw altogether mixed conditions with a wet warm up session and drizzle in between for a while. However, chances of heavy rains were possibly there but that just did not happen. The race saw both the Ducati riders Rossi and Hayden finish fifth and eighth respectively. Ducati news reports that from the start of the race, Rossi and Hayden were not as competitive as everyone had expected them to be. Later as the race progressed the riders came in to the feast and tried nailing their competitors down. Rossi could have done better than fifth but the machine he was riding on was still not as competitive but is improving slowly. In the Valentino Rossi had to satisfy himself that he almost managed to reduce the time gap to 7 seconds behind the winner Casey Stoner. Rossi also was satisfied that the bike’s performance is improving day in and day out.

On being asked about the whole performance and the event; Rossi said that he was not happy with the fifth place and also admitted the fact that the bike needs few more corrections before the team could taste success. He also said that the bike did not offer him enough grip and was continuously sliding through the race which obviously kept Rossi from taking down the competition. Lastly he said that the team has a long way to go and they have no intention of backing off. Nicky Hayden also said that the team could not really work on their ideas as the warm up session as wet and trying out new ideas in race can turn out harmful. He said that the team will analyze the data from this race and see on what they can improve. All in all, the team is together working to get things right and we hope that Rossi adjusts with Ducati soon.