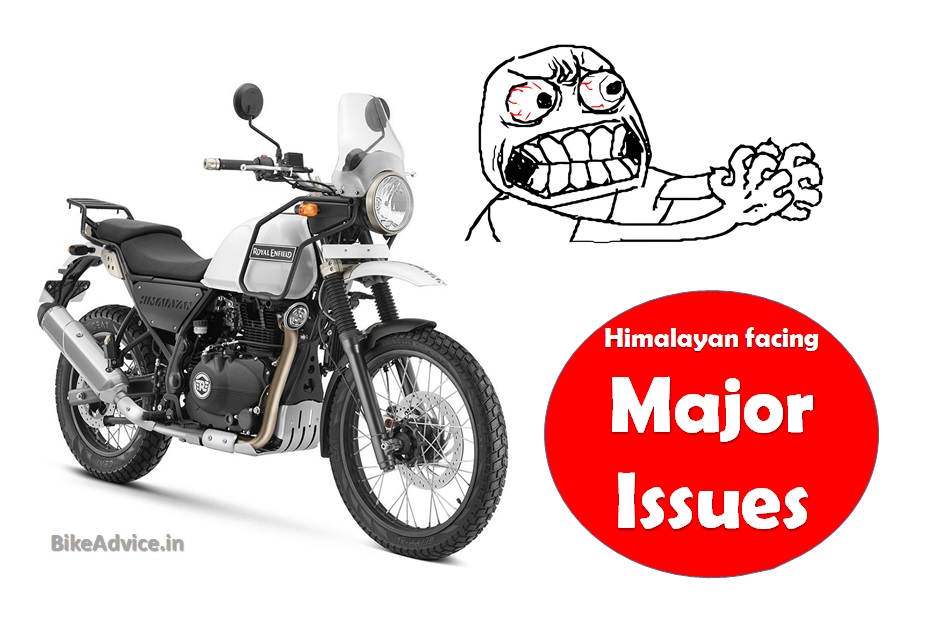 Royal Enfield Himalayan is company’s first major launch on a completely new platform after the Classics and Thunderbirds and if you want to include Continental GT as well. The concept of an off-roading adventure motorcycle is immaculate, however, the production model seems to have some major engine and other related issues.

“I Got The Delivery Of Royal Enfield Himalayan Snow White Colour Today Evening,The Gear Box Had A Serious Issue And The Gears Got Stuck In Some Gear Which Constantly Shifted Out Of Gear Upon Trying To Engage The Gear Just Barely 7 Kms From The Showroom .I Took The Delivery From North Delhi Motors Shalimar Bagh.

I Had This Problem At Netaji Subhash Place And I Was Literally Stuck On The Main Road With Bike Constantly Moving Out Of Gears And The Dials Showing A Dash Instead Of The Gear Number. I Called Up People At The Show Room At Around 7:30pm,And By 7:50 Two Guys From The Showroom Had Come To See What Was The Problem. After Half An Hour Of Ordeal And Looking At The Things That The Guys Were Best At Doing -“ANALYSING “,To My Horror I Was Told To Take The Bike And Go Home With This Serious Problem. The Manager Of The Workshop Had Been Called And It Was His Suggestion That I Somehow Take The Bike Home And That Someone Will Pick The Bike In The Morning.

Let Me Ask Few Things From You Guys At Royal Enfield:-

1.Things Like This Are Unacceptable From A Bike Of 1.85 Lakhs Although Its A Machine And In Rarity These Things Might Happen To Anyone.

2.Even If Someone Gets Into A Problem ,The Very First Hour Of Owning The Bike-How Can Someone Ask To Take It And Go Home.

3.Why A Proper Roadside Assistance Was Not Given With Someone From The Technical Team Of The Workshop?

4.Who Is To Be Held Responsible For The Faulty Gear Box And Who Takes The Responsibility Of This Bike Which Broke All The High Hopes That I Had With This Bike.

5.Shameful That No One Ever Called Me Up To Discuss What Was My Take And That Will I Be Able To Drive It Home Where The Distance To My Home From The Point Where The Bike Broke Down Was More Than That Towards The Showroom.

6.Pity That You Guys Are Aiming Skies Where The Harsher Ground Realities Still Will Haunt You .Because The Excitement And Elation To Own A Royal Enfield Today Turned Into The Worst Kind Of Pain That I Have Gone Through Tonight, Besides The Agony And Disgust That I Felt When People Asked Me What Is Wrong With This New Bike. Besides All The Laurels I Have Been Spreading For This Bike I Think I Should Rather Warn Possible Customers From Buying This Unpolished Himalayan. Let Me Ask You How Will It Survive The Real Himalayas???? How Will You Provide Assistance To Remote Or Even States Outside Delhi When Nobody Cared Or Got Bothered That A Customer Is Stuck In The Middle Of The Road And The Best Thing For Him Is To Take It With A Pinch Of Salt And Go Home And Sleep ,For His Dreams Have Just Shattered!!!”

This happened on my friends Himalayan. We were not able to start the engine early morning when temperatures were low at our camping site. The starter motor would run freely but there was no action on the crank. We assumed that some gear between the motor and the crank might have slipped. There was no grinding noise either. Tried to push start the bike but it would not fire and eventually got rich. Couldn’t even check the spark because some genius at RE decided to part ways with a kicker, Thanks RE.
So we decided to push the bike for 10kms to the nearest mechanic. Identified that the flywheel(freewheel) nut was loose and wasn’t turning with the crankshaft. After tightening it the engine fired up without any hesitation.

After another day of riding we checked into a hotel. Next morning the same problem appeared. The motor was spinning freely again with no action on the crank!

Luckily the guy was able to source a key nearby and the issue was fixed.

So, I am assuming that the flywheel nut came loose after a hard day of riding followed by low temperatures at our camping site and when the 1st mechanic tightened the nut it wasn’t torqued to spec and somewhere somehow the flywheel key split in half overnight when temperatures went low

Update on my vehicle: Engine issues within 200 kms on the odo.

Dropped my vehicle at the service center today to check on the whistling noise and mis firing and they suspect a problem with the engine. Since the vehicle had done 220 odd kms and noise is from the engine, they want the company guys to come and inspect the vehicle before confirming anything per the mandate from RE. They said that this the second vehicle recently with a similar problem and in the last case, RE changed the engine itself.

RE Reliability at its best

These are just a few issues which we could club up for you. In general, go to any Royal Enfield Himalayan forum, problems like hard gears, braking issues, clutch snags, loose nut bolts etc are just too common. In fact, if you go through Powerdrift’s review (check around 3:20 mins) of the Himalayan, they elaborated that “..a lot of nuts and bolts came loose after riding the motorcycle in the woods…” This, for a motorcycle which is promoted heavily as an off-roader…!

We have even heard that Royal Enfield has to change engines of some of the Himalayans! According to Wanderdriveeat, at least four examples of engine head swap are known, so the figure will be more than this. Surprisingly, there is whole lot of parts that have been questioned… Just for example, have a look at this advisory (appears to be for servicemen) put up at some Bangalore dealership credit XBHP. 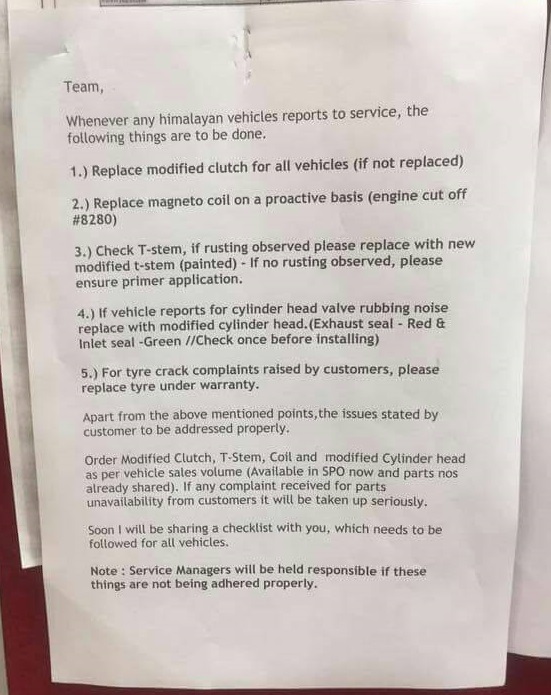 Why this is concerning is that we have seen some brand new motorcycles reporting major mechanical issues. And considering that this is an adventure tourer, god forbid if you are stuck at a remote location, you will not be left with many options.

At around 1.8 Lakhs, you pay a lot of money and most issues like these should have been worked under Quality check! If they are passing Royal Enfield’s quality check department then they need to buckle up their pointers and tighten the regulations.

So, if you are in the market and considering buying the Himalayan, we suggest you to wait till they iron out most of the very rampant issues. We hear that an updated Himalayan has already been introduced silently (which has not made much of a difference). However, the BS4 compliant motorcycle may finally have bigger changes based on the feedback of issues.