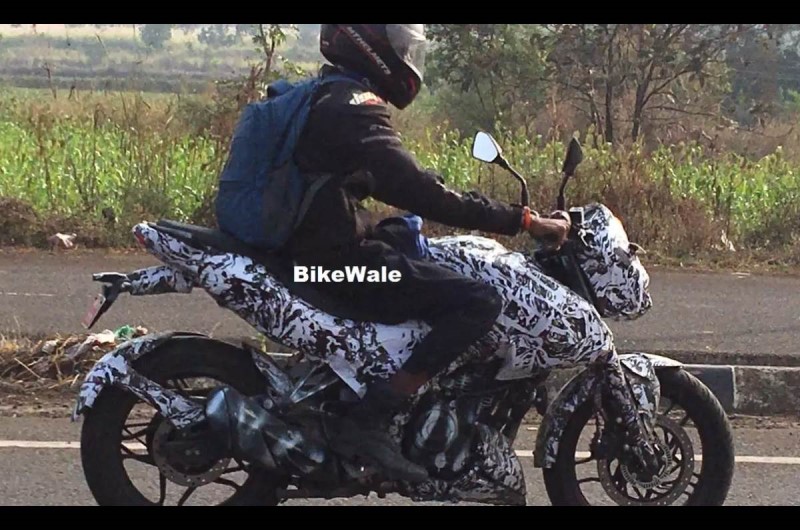 Will Pulsar NS200 be discontinued from the market? Will the Pulsar 250 actually come as a downgrade? Is this simplification of the Pulsar range? We have an opinion from our Editor – Saad Khan…

A few days back, the first spy pics of what looked like a new-generation Pulsar emerged on the internet with claims of it being the new 250cc model.

If you look closely at the engine area, there is no water/liquid cooling and it is more of a relatively basic motor. Now, this is the biggest reason why we believed that this could, instead, be a smaller Pulsar under tests. The thought process was that Bajaj already sells the newer generation Pulsar 200s (NS and RS) which get a technically more complex, liquid cooled engine. This motor has been derived from the KTM’s 200cc engine. So, a newer generation, bigger capacity machine with a bare basic layout did not seem to fit the puzzle.

However, Bikewale, the original source of this spy pics, strongly believes that this is the Pulsar 250 and they also appear to have some inside info about it (apart from the spy pics). The idea that they are propagating is that the new Pulsar 250 will not be as technically advanced as the current Pulsar 200s, just like the Pulsar 220.

Which means that the new Pulsar 250 will join the older-gen Pulsars which currently comprise Pulsar 125, Pulsar 150, Pulsar 180 and Pulsar 220. It must be known that majority of Pulsar sales come from this platform only. And if you look at the 200cc segment, the Pulsar 200s are probably a wee bit more advanced (than required) as none of their competitors come with so much of power and are as technically superior.

This may have compelled Bajaj to work on a relatively simpler engine architecture for its newer generation Pulsars. This platform (with a new frame, monoshock and design language) will obviously be then taken to upgrade the complete older generation Pulsar range in the coming years. It is ironic that this platform has been running since 2001 – the inception of the Pulsar brand and is still a hot seller!

What is the future of Pulsar NS200 and Pulsar RS200 Then?

In fact include the Pulsar NS160 here as well. The future of these models can be best described as – uncertain! Chances are that Bajaj will continue selling them till they are doing fair bit of sales in the Indian as well as international markets. However, they may not get any significant mechanical updates in the future. And once they live out their lifecycle they may be discontinued from the market. How soon or late will this happen? This purely depends on the demand and how quickly bikers lap up the Pulsar 250.

This actually explains the simplification of the Pulsar range. Though we can not predict what displacements will Bajaj decide under this moniker but a 125cc, a 150-160cc model, a new 200cc (air cooled) version along with this flagship 250cc, would be a nice lineup. It has already been hinted earlier that Pulsars will max out at around 250cc and there may not be a bigger Pulsar.

And now with Dominar joining the league, the technically advanced (and more powerful engines) may be used on this portfolio of motorcycles. We have already seen a 250 and a 400 – both of which are based on the respective capacity KTM motors. And yes, Bajaj will expand Dominar portfolio also in the future with newer models.