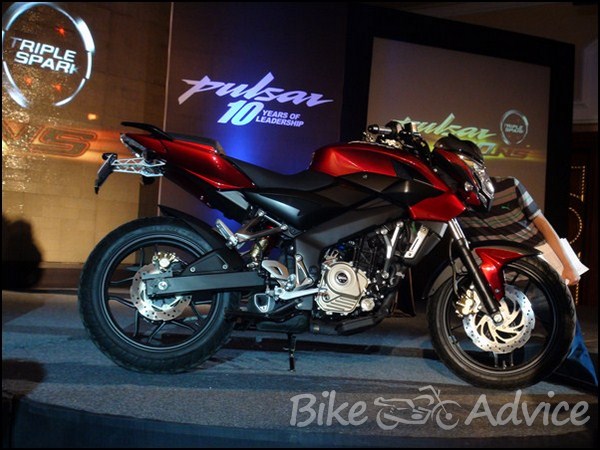 When Bajaj Auto first revealed Pulsar 200NS on 30th January 2012, everyone had only two questions in mind “Price and Availability”.  Bajaj Auto smartly answered that by pricing the motorcycle below Rs. 1 lakh and launching it in a phased manner. This statement created doubt in many minds including me that, the price is ex-showroom or on-road? But all the confusion has been cleared now as, Bajaj Auto has finally announced the price of Pulsar 200NS. Pulsar 200NS has been priced at Rs. 85,000 Ex-showroom Delhi.  The on road price of around Rs. 94,000 is below Rs. 1 lakh mark.

By announcing the price of Pulsar200NS, Bajaj Auto has let the cat out of the bag. No doubt that Pulsar 200NS is the hottest launch of 2012 and every Indian bike enthusiast has waited for its official launch.  But with the ex-showroom price of Rs. 85,000, Bajaj Auto has played its VFM (value for money) trump card.  The price of Pulsar 200NS has undercut many performance motorcycles available in the country by hefty margin.  For example, Yamaha R15 V2.0 cost Rs. 25,000 more while Honda CBR150R and KTM Duke 200 cost Rs. 35,000 more than the new Pulsar 200NS.

–      A motorcycle which has been designed by Mr. Edgar Heinrich, the person who was previously designing BMW motorcycles. He is a much respected name in motorcycle design world, his works include designing of BMW S1000RR & BMW R1200GS motorcycles.

–   It is known fact that Pulsar 200NS is heavily based upon the KTM Duke 200 engine platform. The lower cylinder head and underbelly exhaust are the same which is seen on the KTM Duke.  Both motorcycles have the same bore x stroke of 72 x 49.

–    On the top of these features, you get dual disc brakes, monocross suspension and six speed transmission.

The success of Pulsar 200NS is very critical to Bajaj Auto’s aim to become outstanding motorcycle manufacturer across the world. Even Kawasaki and KTM agree that Pulsar 200NS is a global product and it can go to any market. Bajaj Auto has even done a pilot study for customer feedback. Based upon the feedback, the final production version has got some changes in the suspension settings, headlight vision and few minor changes to improve fit and finish of the motorcycle (may be a reason for delayed launch).

Not to say more but this is the best VFM (value for money) package available in the country as of date. We always criticized Pulsar for selling at highest margin but are other manufacturers providing these features at the cost of Pulsar 200NS? There are some features which we still want to have on Pulsar200NS like full fairing and fuel injection. Bajaj Auto has intended that it will launch full faired variant of Pulsar 200NS in the near future; however for fuel injection we may need to wait for next bigger Pulsar.

At the price of Rs. 85,000 Pulsar 200NS will surely rule the upper performance segment and it is interesting to see how competition will take this challenge.

You can also join the interesting Pulsar200Ns discussion at our forums.