As this news was building up, we had also reported a possible decline in petrol prices before the end of the fortnight. Government aided PSUs have slashed price of petrol yet again by 65 paisa per liter. After adding the various fuel levies and state incurred taxes the actual reduction would be more. 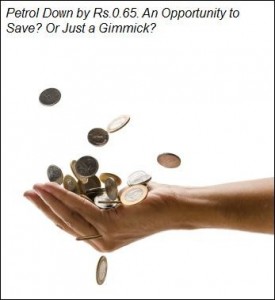 For Delhi it amounts to a total saving of 78 paisa per liter and 82 paisa per liter in Mumbai for the consumer. The decrease is already in effect from midnight. Shell has also reduced prices of petrol following the PSU’s announcement.

This is the second reduction this month after the oil majors reduced petrol prices by more than Rs 2 on 16th November. So effectively the total reduction adding last fortnight’s slash mounts to a saving of more than 3 rs for every liter a customer fills in his vehicle. The reduction, however, is lower that an anticipated amount of Rupee 1 because of the firming up of crude prices during the last couple of days.

However, it has also been told that prices of petrol might be hiked next fortnight in the wake of crude market showing trends of reversal along with the rupees continuous lacklusterous performance against the dollar.

Reduced prices of petrol in various cities of India:

So after 33 months, we see two back to back reductions in the prices of petrol and this also comes with a warning of increment. How do you see this change. Report your views in the attached poll.