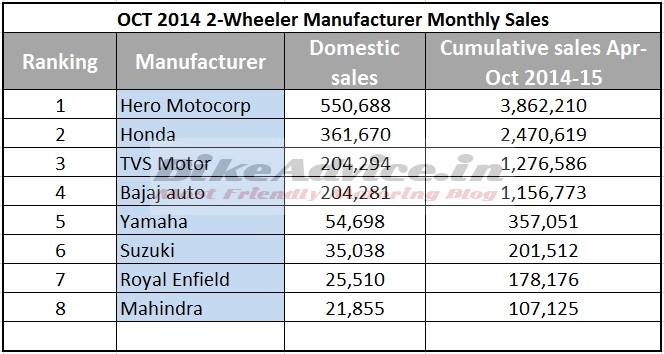 Being one of the world’s largest two-wheeler markets, one would have expected that the festive season would have carved last month’s sales figures in golden alphabets. For some reason, this has not been the case this time. Compared to last year’s sales, almost every manufacturer has seen a drop in sales. 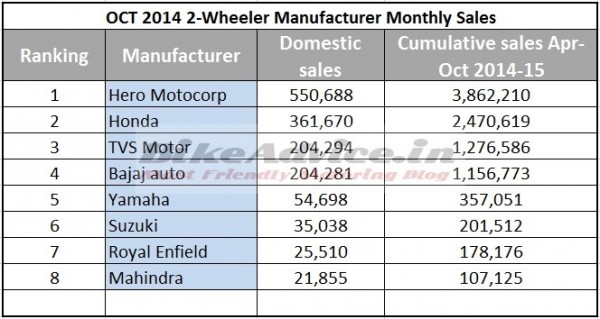 Hero MotoCorp, the world’s largest two-wheeler manufacturer may have had a wonderful Dhanteras, but the whole month’s story tells another tale. Registering a total domestic sales of 5,50,688 units, the company saw a drop of 10.33 per cent in comparison to its sales in October 2013.

Honda Motorcycle and Scooter India Pvt Ltd seems to be slowly but steadily catching up with Hero. Yes the gap is still huge but it seems to be reducing. They registered a total sale of 3,61,670 units, a rise of 0.42 per cent in comparison to sales on a year on year basis.

Bajaj has been doing great in exports, however, its domestic market is falling

TVS Motor company came third, narrowly whizzing past Bajaj, with a total of 2,04,294 units rolling out of its dealerships which is a huge jump of 17.93 on the upper side of the graph. Among the top four sellers, TVS is the only brand which has registered a handsome growth in domestic sales.

Bajaj Auto, the Chakan based motorcycle makers seem to be getting the brunt of not selling scooters, and ended up selling 13 units less than TVS (2,04,281 units in total). The company registered a drop of 10.79 per cent over last year’s October sales. But keep in mind that the company exports more than a third of its produce, making it the largest two wheeler exporter in the country. 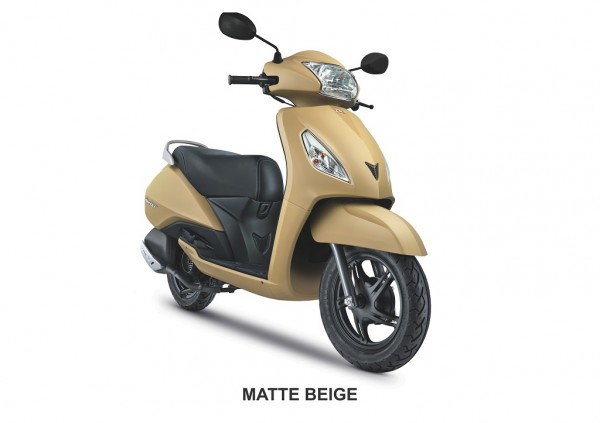 Yamaha India registered a growth of 5.51 per cent and sold 54,698 units in India. In comparison Suzuki sold 35,038 units with a fall in sales of 10.64 per cent. Suzuki was followed by the world’s oldest surviving motorcycle manufacturer, Royal Enfield, which continues with its amazing run and sold 25,510 units, with a growth of 47.41 per cent! Mahindra dropped by 23.59 per cent and sold just 21,855 units and this includes their new scooter Gusto.

These figures are domestic sales within India and do not include exports for any manufacturer. So which manufacturer will you put your money on..?