6 years back: A thin stick insect lookalike guy (who also happens to be our hero in this so called write up) gets off his bed on one fine lazy morning to leave for his college, He starts poking his nose and tries to open his eyes wide courtesy of the sleep, He tries to catch up with the headlines (read: ‘Spice up your sex life’ section, ‘Photo of the day’, ’ know your today’) in the newspaper, same old monstrosity prevails. He flips the pages over nonchalantly until he reaches the last page, his eye balls pops out as if the news paper has printed a photo graph of ‘play boy’ mate. He runs towards his dad who is busy sipping over his tea, he shows the last page to his dad and says ‘I WANT THIS!’ 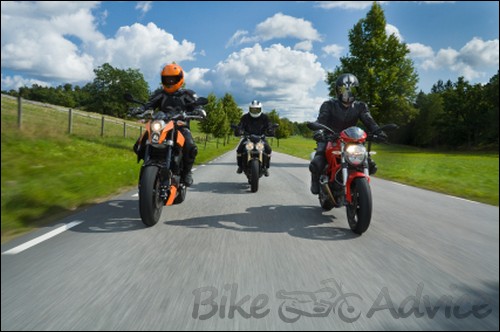 Dad peeks out of his reading glass and gives the boy ‘you are from middle class and I have already done my job by giving you birth’ look, boy understands as he walks in silence gets dressed, kicks his dad’s Jurassic aged scooter and disappears in the crowd . The boy would grow up to be lame software engineer as years would go by and so would the thought that has captured a place in his heart on that day.

The last page on that day’s newspaper bore the news “Presenting India’s first premium sports bike – Tero Tonda Parizma” and the photograph of a bike which the boy would never be able to take out of his mind.

Present Day: Amidst the ocean of cubicles there sits our guy with approximately the same number of hair on his head as the number of papers scattered over his desk, his pot belly dances in geometrically unmentionable ways as he sweats hard trying to do programming. His thick spectacles could have been used by NASA to view heavenly objects. His boss comes at him and tells him about the new ‘PROJECT’ he has to work on simultaneously. A smile laced with corporate ingenuity lay all over his face as he walks away from him. He drags himself towards the cafeteria as his face is covered with a strange sense of indifference he gets a coffee and starts sipping on it in silence.

“Dude I screwed up a Parizma yesterday night bad on my Fulsar 220 , the poor Parizma guy was nowhere to be seen once we started the drag”

He over hears the conversation which is being carried out by a bunch of his office colleagues who indulge in biking.

“Ya man, Parizma sucks, it’s seriously old and outdated. It looks like a medieval artifact in front of my ‘alphabet which comes after Q’ 15”. And they both started laughing like gays madly in love.

“Hey look I would appreciate if you start giving Parizma a bit of respect” says our hero looking furious.

The guys turn at him.

“What’s your problem you giant replica of LPG gas cylinder, go get a life. Wait! I know you! You are the same sorry lame ass who got a Parizma last week. Didn’t you?” replied one of the guys with a flash of triumph in his eyes.

“Ya so? I have always wanted a Parizma and I got one for myself. I think I made the right choice and if you guys differ then how about you talk me out of it”

(Ok so this is ME (Narrator) interrupting in the middle, so the real catch being our hero is usually very very submissive and the last thing he would ever want to do is to go for an altercation. So I am pretty sure that he has very strong and valid points to save his sorry little pride)

Silence prevailed for a while and then…

The girls present in the cafeteria started laughing for reasons not so mentionable.

“Hey my ‘alphabet which comes after Q’ 15 would not vibrate even a bit at high speeds what do you have to say about that?” the guy said with his chest wide open, looked like someone had pumped in helium up his ass.

“Well ya that’s because your bike is a technical wonder when it comes to technology and is what essentially what a sport bike should be like but look at the sporty position you have to ride in, keep riding your bike like that for 5 years and would make a parabola out of your back as opposed to my Parizma’s riding position which is so relaxed”

By this time the Fulsar guy was ready with his next shot.

“Your ZMA is technologically outdated and it looks like it was designed by people who live in the remote jungle areas of the Amazon unlike my Fulsar and his ‘alphabet which comes after Q’ 15”.

“Sure it lacks the gadgetry that your bikes have, but then it surely does have all the prerequisites which ensures fuss free riding pleasure and besides not everyone gets excited by looking at some fancy diwali colored bulb lighting every now and then on your console no matter how informative they may be because for some people it’s about the joy of riding the bike and not get baffled by technology”

He took a pause and then continued all over again.

“Besides looks are totally subjective, I admire the way Parizma looks and besides you are the one to talk about huh? Your Fulsar 220 looks like as if some body took a normal Fulsar and pasted a huge fairing on it with the help of feviquick and for you Mr, you know what? While the legendary R1 was in its puberty , it once copulated with a Luna and their son would grow up to be called ‘alphabet which comes after Q’ 15 so too shouldn’t really talk about looks, so as I said what might work for you might not work for some one else”

There was a long haunting silence in the room which was eventually broken.

“Hey what do you have to say about the fact that your Parizma drinks petrol like a battle tank? “Said one of the guys as he high fived the other one.

The guys were now out of arguments.

“So who’s wins finally?” Said the Fulsar guy with a perplexed face.

“Well nobody my friend, you did not get really the moral of the story did you? Each of these bikes serves it own purpose, there should not be a question of ‘which is the best among them?’

Because they all are best in their unique ways, lets see it this way my bike is all about reliability and refinement as opposed to your Fulsar which boasts of tarmac scorching exhilarating performance as opposed to his ‘alphabet which comes after Q’ 15 which is like every boys wet dream because of its sportiness and is a technical marvel. So what might appeal me might not necessarily appeal you and vice versa, because it would not fit in the essential definition of what biking is for you. They are all great machines meant to cater the needs of individual’s who represent a different niche of their own. So it’s just about futile talking about which is the best out there…”

“But you still can’t win against in a drag” and they both started laughing yet over again.

He didn’t reply this time, he finished his coffee, threw the cup away and walked out of the room, he knew they would not understand because for them its just about biking and is not about the sweet indulgence that follows once you ride your machine. The indulgence which lets you appreciate its beauty, lets you appreciate the purpose it serves, lets you to get soaked in the moment of sweet memories you cherish with your machine, lets appreciate the places your machine takes you. Biking is about nirvana, the simple joy of letting your worries fly past you as you cruise along the road not wondering about any thing or any one and is about living in this moment, and this state of nirvana is here to stay no matter how maddening the world around us gets.

Disclaimer: Although this is purely a work of fiction, the character and the machines mentioned about in the above write up may or may not be fictional and any resemblance of the characters and machines with you and your machine is perhaps intentional. 😉