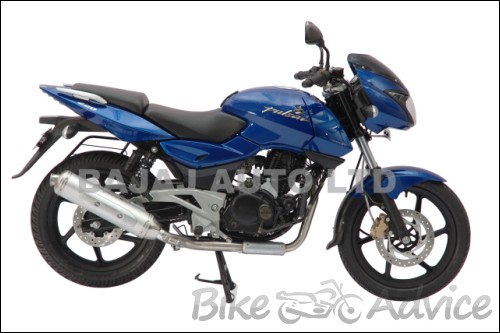 If you raised your hands for any of the above questions, than you are set to cherish what we are going to talk about in our forthcoming lines. Bajaj Auto is about to settle all the quenches for the above questions in a typical Bajaj fashion. Bajaj is all set to launch a naked version of its existing Pulsar 220 DTSi, which would be called as Pulsar 220 “S”. ‘S’ here would stand for “Streetfighter” or “Sports”, with the existing “F” of the semi faired version standing for “Faired”.

According to our reports, the bike would exactly be similar to the existing 220 DTSi sans the front fairing and that means the projectors will also have to be traded off. But the bike would come with 55 Watt assembly for that sparkling headlight glow reminiscent to Avenger 200. Another way of looking at this move is that many people still miss the naked Pulsar 200 and its sudden demise did not help matters anyway. This bike carries forward the 200s legacy with 20ccs and 3 horses more along with some enhanced features like huge bulbous front forks, clip-ons, disc brakes and a few tidbits here and there. With the extinction of front fairing, the weight would also go down by around 3kgs which would in turn help in returning slightly better performance figures along with slight better fuel efficiency. Naked looks would also enhance the city character of the bike as it would feel lighter to maneuver in the traffic due to the absence of the obstructing fairing. Cornering is also expected to be slightly better that its current edition.

Bajaj seems to have mastered this game of pricing perfectly. The bike would retail at an astonishing price of (less than) 73k on road Delhi which is around 3k lesser than the 220 F and this move ensures that Bajaj has rang hard bells on TVS and Yamaha’s managements as this bike would compete directly with the FZs and Apaches of our worlds. The bike would be launched pretty soon as indicated. Our guess is probably by January end 2010 we can see this bike burning our Indian roads.

The basic idea behind this bike is similar to what Yamaha followed with its FZ series but at a more widespread level. Bajaj wants to cater to the needs of those customers who want power but prefer naked bikes. This bike is not exactly a new model which Bajaj wants to portray, infact, this would be an option provided to the hardcore performance (and slight looks) enthusiasts. This would also appeal those who admired the Pulsar 200 and probably do not like the semi faired 220 DTSi. And at such a luring price tag you get 21 horses, superb performance and an exhilarating experience. Addition of this bike to the Pulsar stables would further propel Bajajs plans of selling 85k Pulsars a month.