A wise man once said, he who desires is always poor, One who desires seemingly can never be satisfied with what he has. It’s always “never enough”. Case in point, the MTT Y2K; When The Suzuki Hayabusa was launched back in the day, many believed its insane top speed of over 330 Km/h was too much, but, there were some who wanted more, they wanted to turn it up a notch, hence the people form Marine Turbine Technologies (MTT) decided to make a machine that would make the Suzuki literally run for cover. They built a one of a kind motorcycle that is beyond doubt like no other on the road today, that looks at the face of insanity, and laughs… Read on as we find out what kind of ingredients were put into this potent mix of speed and excessiveness. 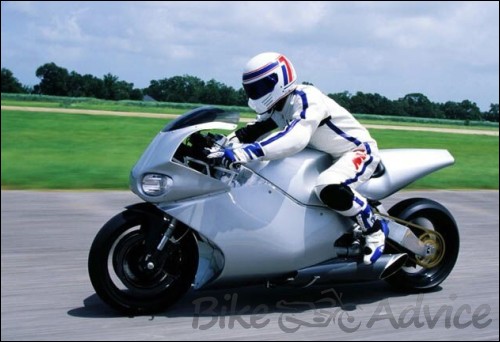 Weighing in at just 190 kilos, this bike tips the scales just as much as any other superbike, but what really sets it apart is that instead of the usual piston and crankshaft engine that all our bikes uses, this one employs a Rolls Royce helicopter engine… It surely sounds scary but that’s just the beginning; Any engine you take be it a car or a motorcycle engine , it would have an idle speed (the speed at which the engine spins when the vehicle is standing still) of about 1000 – 2500 RPM, the Y2K however stands miles apart with a 20,000 RPM idle speed, helicopter engine, remember? It revs all the way up to a mindboggling 50,000 RPM!

The makers of this one of a kind marvel were from MTT, a relatively small company in the US with a workforce of just 11. This company specialized in the re-use of retired jet engines. These jet engines were retired as per the rules set by the Federal Aviation Authority (FAA) which stated the maximum allowed lifespan of the same. MTT collected these scrapped engines for bargain prices, reconditioned then and adapted them for uses ranging from jet powered motorboats, fire pumps and generators. 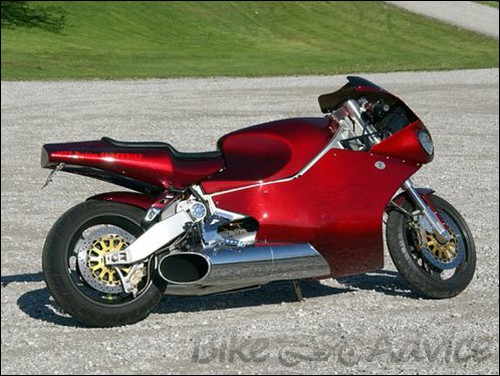 Ted McIntyre is the boss at MTT and he led the company towards the idea of building this amazing piece of machinery. He hired Christian Travert, who was a leading specialist in the design of custom heavy duty machines; his experience designing machines for African rallies and other custom builds was put to full use in the Y2K. Initially, Ted approached Travert with the hope of adapting a Harley chassis for the Y2K which Travert turned down suggesting that they start from scratch.

The frame along with the swing arm was custom built and made entirely out of aluminium by Travert, while the engine was a Rolls Royce Allison 250, used in helicopters; the amazing fact was that this engine weighed a mere 63kgs which was perfect for a bike. He also devised the transmission set up that had just two gears and also was automatic where the first gear would provide the initial pull and the second would haul the bike to its top speeds. The bodywork was entirely made out of carbon fibre, which is known for its superb strength and light weight. Going fast was one thing, bringing it to a halt was another, the brakes on the Y2K was equally massive with a total of four 320mm disc brakes with six piston calipers, 2 in the front and 2 in the rear of the bike which would be enough to stop a train, well, almost . The final production version weighed just 190kgs.

A dyno test on the engine showed that it produced a peak power of 286Bhp at no less than 52,000rpm along with an equally massive 574nm of torque. But the real test was the one done on the roads. Needless to say, this machine is a total beast. It’s insane power and weight combination scorches the roads like nothing else. With top speeds of nearly 400 km/h, it’s actually hard for the rider to actually hang on to the thing. You might be wondering where are the roads for showing off this monstrosity, but then again, at a price of 150,000US$, most owners would have their own private runways, which actually suits its sound. The sound of this machine alone is enough to send chills down the spines of the most seasoned bikers. In terms of fuel economy, it’s actually more practical to use time as the scale. In fact, a full tank of fuel would be approximately 32 litres. This would give you about 20 minutes on the highway. And what’s actually cool about this is that it runs on diesel which is still not great enough considering the fuel economy. But who cares though, buyers of this unique and powerful are generally of the type that really don’t give a damn about these silly aspects. 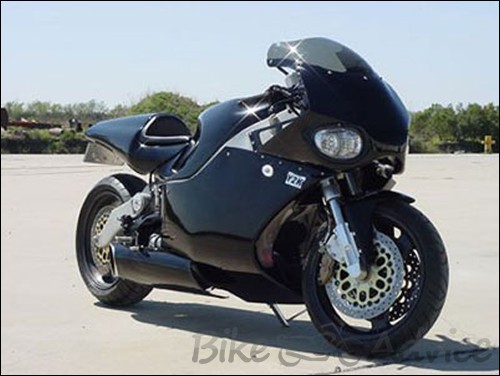 Moving on, there are a few convenience features designed to make life easier, take for example the absence of a side mirror, the people at MTT haven’t completely disregarded the need for the rider to know what’s behind him so they’ve integrated a rear view camera into the main display which also shows the speed, engine RPM and a customized welcome message with the owners name. Then there is air suspension for the rear of the bike which levels under load and acceleration, Another useful feature, one that can save the rider tons of cash is the forward-and rear-looking radar detector and laser scrambler, even a benz doesn’t have that.

Looks wise, its different, with its distinctive twin headlamps and huge exhaust outlets, it easily stands apart from the crowd. All this sounds fine, Jay Leno, the famous American talk show host, who happens to be a petrol head, owns one of these and he once talked about an incident that would make you think twice before you stand behind one of these. It was that he, was on his Y2K at a traffic stop and a shiny Lexus happened to stop behind him, he looked at the rear view camera and saw something horrible, the front bumper of the car was melting like a plastic foil in an oven, it crumpled and cracked and all the while the Lexus owner sat in the car probably listening to some music. Leno sat helplessly as he couldn’t move since he was in a traffic stop with cars all around him. As the lights turned green, he accelerated out of the pack and left the place as soon as he got there. He confessed to this on his show and there have been no news on anything from the Lexus driver and how he might have reacted discovering his molten bumper. Its no joke, the Rolls Royce engine produces enough heat to create some major disaster which is why it is positioned way behind the riders legs and not under the rear seats. I mean who would like to have their bum baked anyways?

Its really hard for one to believe the lunacy that prevails in this world, the MTT stands as a prime example of this and whether you like it or not it is here to stay and to rock the place. 🙂