The word stunt is usually associated with action scenes or dangerous movements made by any person either on stage, on television or movies and even live performances. The common denominator is that a stunt involves risk to the performer or the person doing the stunt. Motorcycle lovers flock to motorcycle shows and exhibitions because of the stunts that the riders do no matter how dangerous. 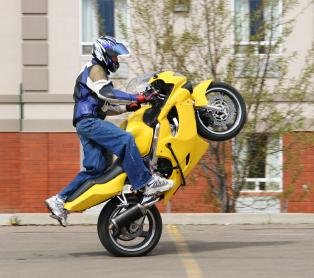 Motorcycle stunts are more dangerous because the rider only has two wheels to support him and there is always the danger of his head being heavily injured despite the use of helmets and padding. Any stunt for that matter requires prior planning as to the safety of the performer as well as the audience. There are stunts that are done to shock the performers without looking into the possible harm that may be caused to all the people involved in the stunt.

In the first place, motorcycle stunts should only be done by riders who are already considered experts in their field. Novices in the world or motorcycle riding and racing shouldn’t be allowed to do stunts that would endanger their safety and even their lives. Others simply do it for the adrenaline.

Every motorcycle stunt should follow a plan or a script which should be implemented to the letter to minimize the risks on the safety of the performer and the audience.

Riders are a wild bunch and they will always go for broke. It may be the excitement that gives them the energy and the resoluteness to do dangerous motorcycle stunts. Whatever the reason is, they should always be ready to face the consequences of such acts.