As we are pretty much aware of the Mahindra’s Mojo Story quite sometime back, which was considered only as a prototype until few days back has got a new lease of life. Yes, the much anticipated motorcycle from Mahindra’a stable the Mojo has been spotted testing in suburb, Off Pune where Mahindra’s research & development facility is located. 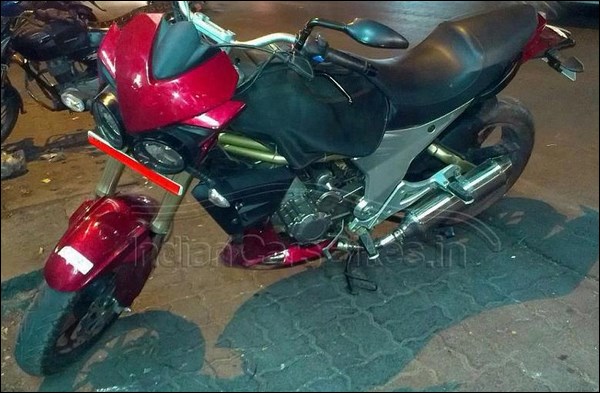 The Testing of their upcoming flagship model finally tells us that the Mojo is not anymore in the company’s drawing boards but has been transformed to a real bike that is being tested for its endurance which could be launched anytime by Mahindra once the test data are satisfactory. With the Mojo lined up from Mahindra’s stable, it would be one of the many 250cc bikes that India would witness this year and the Mojo would compete against the Ninja 300R that is speculated to launch very early as the bookings have started in Pune, the Suzuki Inazuma 250, KTM Duke 390 and our own desi Bajaj Pulsar 375 which is expected to be out in a fully faired version. With so many bikes lined up for the launch, the Indian motorist’s fraternity would have ample choices to pick their bike of choice with a choice from fully faired to a naked street fighter.

The Mojo although carries a love it or hate it kind of looks, technologically it’s not down by even a dime. Mojo has oodles of technology infested in all the corners that it oozes out every time I talk about it. A few features of the Mojo to be worthy enough to explain;

Tear drop design: Design is one of the most important factors that have been concentrated on developing the Mojo, as the looks are subjective; the Mojo has been crafted with Tear drop design in mind. The Tear drop design cuts through the wind like a blade minimizing resistance created by wind blast. Don’t forget that the same design is being adopted by all the manufacturers across when designing a naked sports bike to make the naked design supremely efficient.

Twin Head Lamps with Pilot LED’s: Mojo comes with a twin pod headlight probably a signature design of Triumph, but who cares as far as it looks good. Adding style to the Twin Pod head lamps are the bright twin LED pilot lamps giving out ample light spread turning darkness into daylight.

Twin Exhaust: Now don’t ask me why does a single cylinder mill need twin exhausts? Maybe Mahindra has studied extensively about Indian likes towards twin exhausts and wider rear tires which they thought might as well add them rather to regret later-on if the sales number comes down because of that.

Wave Rotor Brakes: Mojo scores hands down in braking department which comes with the biggest rotors that any Indian motorcycle can get. Mojo features a massive 320mm wave rotor in the front and a 220mm in the rear that aids in accurate braking along with better heat dissipation making it more efficient. As fast as the bike spins its rear wheels from the first gear, the process of coming back to stand still would be even faster with radial calipers mounted.

So, that’s enough to drool about the bike and let’s get into pricing. It is believed that Mahindra would keep the price factor in mind seriously and it’s expected to get launched in the 2 lakh price point which would be ideally sitting between the Honda CBR 250R and the KTM Dune 390. So, Mojo fans save up. The testing picture caught says Mojo is coming soon.