We all would probably know Indian company Mahindra’s entry in MotoGP. They debuted in the 125cc class this season and managed to mark their mark initially with a point finish as well. Here is what Mahindra talked about its team to the media. 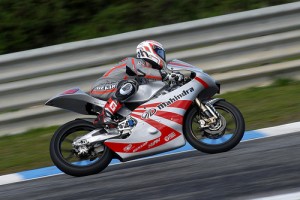 Mahindra Racing makes its debut in Qatar. Indian MotoGP fans across the globe were waiting eagerly for the lights to go green and see the performance of the debutant.

Even before the team and raced fans had hopes, expectations and wishes to see the Indian owned team on the podium.

Too much to ask from a team that is just making a breakthrough, I would say. But they didn’t disappoint. They not only seemed impressive at Qatar but the second race lifted their spirits even more.

Second race, Jarez, Spain. Mahindra Racing’s Marcel Schrotter takes the chequered flag in 13th position to gain the team the first points of its career. Rejoice! Target achieved. Really? Mahindra aims for something greater than just a point finish. With just two days to go for the Portugal Grand Prix, Mahindra retains the confidence and encouragement from Jarez and hope to attain greater heights. To do this they have a two-fold strategy. Technical developments have been made to the engine and chassis and the bike is ready to be tested on the Estoril circuit in Portugal. A new electric ignition and a brand new suspension have also been fitted for the riders to test on the private test day.

Danny Webb was in a strong 11th position and would have finished a decent sixth and seventh position had he not encountered a slide owing to perfidious conditions. “I know I can come back stronger at Estoril. I’m learning more about the bike all the time and we’re all working together well,” says a confident Danny Webb after the race in Spain.

“I wish we could have had another race straight after Jerez. At the end, when I found my rhythm, my lap time was the same as the top five. I need to work on being faster earlier in the race, and that’s what I’ll be doing at Estoril, Marcel Schrotter said after he finished 13th to gain three point for the team.

The riders seem confident about the upcoming races and are happy with the bike, but Estoril is a 4.182km technically difficult circuit with a mixture of extremely tight corners and long straights. Estoril is a difficult circuit but so far the Indian owned team has progressed in both the races and we sure hope that it climbs the success graph even further.