Mahindra Racing is all set to take on the world of racing as for the first time its official racing machine GP125 took the track on the final day of testing at Estoril circuit in Portugal. The GP125 was seen in corporate colors for the first time since the inception of the team. As far as the Mahindra Group is concerned, we all can say that its going great and we expect to see raw action from them on tracks. Mahindra is $7.1 Billion MNC with its headquarters in Mumbai, India. 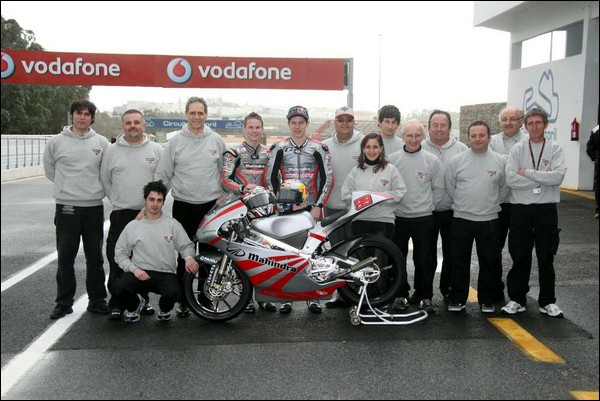 Overall the testing was successful and all the Indian team members along with riders Danny Webb and Marcel Schrotter were present to witness the action. Also team Principal Mufaddal Choonia was present to see the bike in action.

The GP125 is a good powerful bike built by Mahindra’s own Engines Engineering. The bike however was tested for a handful of lap runs in its Silver and Red livery (color) before the team switched to plain black. The red and silver combination of the bike looked pretty stunning and it is said to be Mahindra’s official color.

Speaking on Mahindra’s participation in MotoGp Mr.Anand Mahindra (Vice President and MD, Mahindra Group) said that it is a matter of great pride and honor to be the first Indian motorcycle manufacturer to take part in MotoGp. He further said that MotoGp is immensely popular event with great fan following and Mahindra’s participation in it will surely enhance its brand value and will establish itself as a major player. Mahindra’s motorcycles are going to compete with the world’s best and it will be an ideal opportunity for the company to showcase their strengths and enhance their brand value. 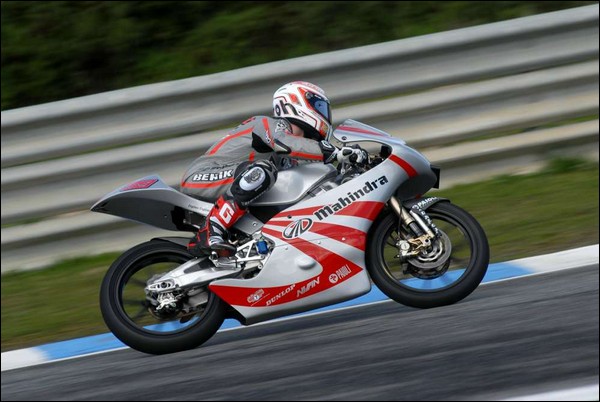 Further the team is really happy to see their racing machine in the official colors and it looked good. The weather conditions were not good for testing but instead of that Mahindra pulled off their testing quiet easily. It was Danny Webb (19 year old, British rider) who took the track for the team on GP125 in its corporate colors i.e. silver and red.

Danny said that the weather was really miserable in Estoril but the sky was clear when they tested their racing machine in silver and red. Earlier Mahindra had tested the bike in Valencia which was a success and now Estoril did not disappoint them. Though the weather was awful, the team managed to test their bike in corporate livery. Mahindra’s next destination would be Jerez in Spain for a three day test from March 4 to 6 ahead of the Qatar Grand prix to be held from March 17 to 20.