After a lot of hoopla and some unclear prepositions about the peculiar and interesting Mojo, Mahindra Two Wheelers, it seems, is working on their best selling weapons – their Powerscooters. This also stems from the fact that Mahindra did not do pretty well in October 2011 and registered a decline in sales despite dealer expansion and various promotional activities. According to an official communication from Mahindra, the company is slated to launch a ‘new’ version of their 125cc Scooter Duro in December this year. 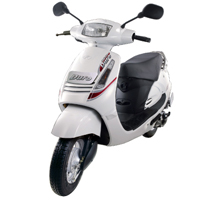 You might remember that I was pretty impressed by their two power packed 125cc scooters – Rodeo and Duro when I had test ridden them back in November 2009. These scooters have one of the most responsive engines I have ridden in scooters. However, a few on-road issues marred the potential of these scoots.

I, generally, have come across customers reporting the following issues the most:

A few days back sale of Duro and Rodeo crossed the magical figure of 1,00,000 units. Though at present, I do not know what have changed on the new Duro, but I expect that Mahindra would have worked on the frugality of the engine along with the ground clearance specially.

Team BikeAdvice should get back to you with all the details by this month end. I hope we get the nitty grities ironed out for an otherwise a very good product.