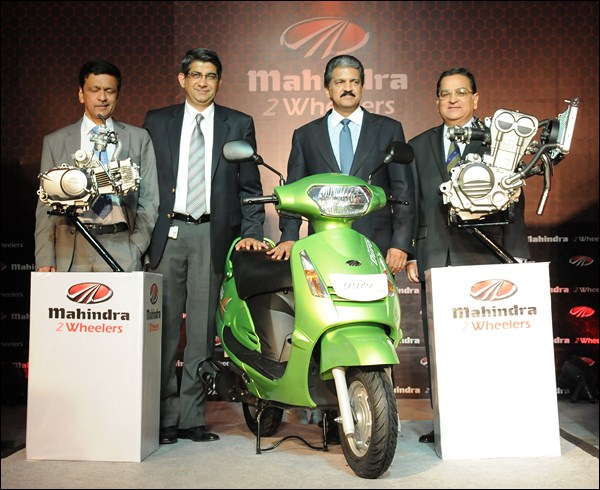 Mahindra 2 wheelers, as everybody here would be aware of made a right entry into the India market by acquiring Kinetic Motors, which wasn’t performing upto the mark following the drop is sales of its flagship mode Kinetic Honda which then came out of Honda’s support. This is age old story.

When Mahindra 2 wheelers stepped into the market, there were great hopes that the company had to carry along its shoulders. The company initially came up with scooter models and then over a period of time entered the motorcycle segment too. However, it was unfortunate that the company wasn’t able to mark its presence, the way it did in the scooter segment. This is again not a new story to hear, but what comes in the following paragraphs are what that has impressed us really.

Mahindra 2 Wheelers, a part of the USD 15.4 billion Mahindra Group, formally inaugurated its new Research and Development centre in Pune yesterday (4th of July). The future ready centre which is the third largest of its kind in India was inaugurated by Mr. Anand Mahindra, Vice Chairman and Managing Director, Mahindra Group.

According to the press release of the company, ‘The centre has been recognised by the Department of Science and Industrial Research (DSIR) and will enable Mahindra Two Wheelers to undertake in-house design and development of engine technology for its motorcycles as well. It thus, bears further testimony to the company’s commitment to utilize technology driven innovation to emerge as a serious player in the highly competitive two-wheeler market in India.’

It is indeed very surprising and at the same time delighting that an Indian company has come up with so much of efforts to tap the huge potential out here in the country. What is even more interesting is that the company unveiled two whole new engines specifically designed for its range of two – wheelers. The first one was a commuter based 110cc engine, which we’re not sure at the present if it is for a scoot or for a bike. The second one is a 300cc engine which will soon come alive in the form of a motorcycle. Both these engines were designed and developed at this facility in Pune.

“The new dedicated facility will enable us to harness the technology of the future to create tomorrow’s products. It will allow us to design in India, for the discerning Indian consumer. The Micro Hybrid technology developed for the new Duro DZ is a clear validation of the value it offers the business. In future, I am sure we will see this R&D facility emerge as a symbol of Indian ingenuity,” said Anand Mahindra.

The company is already known for its micro hybrid technology in its Scorpio and Bolero range of MUVs. The same kind of technology will soon hit the roads with the support of Mahindra 2 wheelers in its range of scoots as well. Oh, God I’ve so much good news to share!

This facility is the home to over 175 engineers and designers. The new Mahindra Two Wheelers R&D facility was created at an investment of about Rs. 100 crore and has two wheeler experts who are leading in various technology and product development projects. In fact, the new Duro DZ and the recently launched Rodeo RZ with the all new ‘Z’ series engine were developed at this facility. This engine series incorporates the pioneering Dual Curve Digital Ignition (DCDI) technology and patented fuel level indication system. Hmmm, Impressive!

The company is also all set to launch 3 new models this year. There’re high chances that all these 3 will be bikes as the company has spent all these years in building up its presence in the scoot segment.

“The Mahindra Two Wheelers R&D Centre will provide us with the dual benefits of indigenous design at lower costs and shortened product development lifecycles. These two tangible benefits, when coupled with a considerably shortened go-to-market strategy with newer and more technologically superior products, augurs well for the future of the business. I am also happy to announce that Mahindra Two Wheelers is set to launch three new motorcycles in this financial year. We are committed to our customers and will go to any length to ensure that they get truly world-class products, at competitive price points to drive on Indian roads,” said Anoop Mathur, President – Two Wheeler Sector.

The Mahindra Duro DZ is by date, the first two wheeler with micro – hybrid technology in the Indian market. What really happens with this technology is that when the vehicle is in idle, say in traffic signals or when you’re waiting for someone along the side of the road, the engine goes for a small nap, thereby enabling you to save a few bucks on your rising fuel cost.

Commenting on the direct and indirect benefits of the new R&D center, PS Ashok, Head – Research and Development, Mahindra Two Wheelers said, “This multi-faceted R&D facility boasts of truly advanced facilities in the two wheeler industry in India including a Design Studio, Prototyping Center, Engine Development Center (EDC), CAE/CFD facility, Fatigue Test and Reliability Lab, and an Electrical and Electronics Lab, amongst others. The centre will develop prototypes and components from design through to production, which will then be transferred to the company’s brand new production lines at Mahindra Two Wheelers’ Pithampur plant.”

A state-of-the-art design studio has also been created exclusively for rendering visualization, clay mock – up and digitization of new products for the future. This center is fully equipped with the most modern software and hardware which will facilitate vehicle design and integration. This would take care of the aesthetical part of its vehicles. So, this ensures that we can expect the future models from Mahindra to be impressive to the core, both in terms of looks and the performance.

So from now on, we at BikeAdvice will have a lot to research and keep updating our readers about the Mahindra 2 Wheelers which is ready to conquer the markets with a bash. Stay tuned with us for more details.