Mahindra 2 wheelers took 80% of the stake over Kinetic Motor Company Ltd in the mid of 2008 and the company has been doing pretty well in its scooter segment. The company currently has 4 models in its scooters’ portfolio which are Rodeo, Duro, Flyte and Kine. Later in the mid of 2010, Mahindra 2 wheelers entered the motorbike segment with its Stallio bike endorsed by the Bollywood star Aamir Khan. Though the foray was smooth and timed right, the bike didn’t do well in the market. 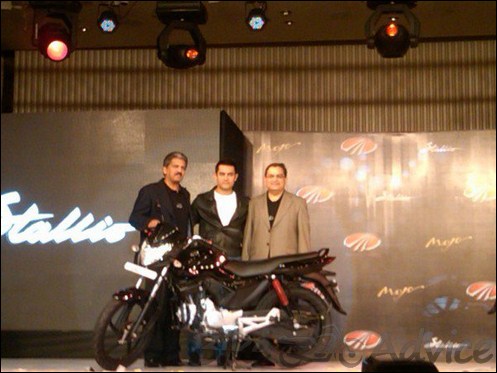 The reasons for the unsuccessful debut of this bike are its technical problems which include a rough gearbox and too much of vibrations from the engine and a few other parts as well.  So, Mahindra 2 wheelers has now decided to re-launch the Stallio again with all its problems duely recovered. It looks like the Stallio will be re-launched by the end of this year itself. The company has no intention of ceasing the production of this model and launch a replacement for the same.

Commenting on this, Mr. Anand Mahindra, VC and MD, Mahindra group said “So far, the two-wheeler business is doing better than expected. In case of Mahindra Stallio, we would be recalibrating the entire motorcycle and re-launch it in the domestic market. We could have laun­ched a separate variant of the motorcycle. But we didn’t, since our focus is on quality and reliability of the product,”

It is to be brought to your notice that Mahindra 2 Wheelers is coming up with this idea of re-launch at a point where only  5181 number of Stallios has been sold all over the country since the time it was launched.

Also, the company is planning to launch its 300cc Mojo , which was showcased simultaneously at the time of Stallio’s launch by the end of this year as well.

Here is the technical specifications of Mahindra Stallio