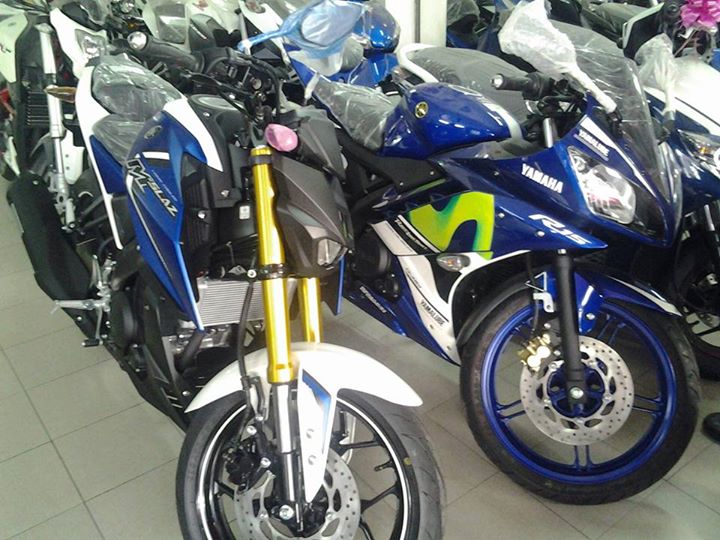 Yamaha’s latest small capacity motorcycle is the naked version of R15 called as the M Slaz. It was very recently launched in Thailand which was also its first global unveiling and if you were wondering how does the motorcycle look along with its faired sibling, we finally have a pic shared at the Yamaha R15 Thailand Facebook page, which gives us a good view of the visual differences.

Then there are other cosmetic and mechanical differences like the all digital meter assembly etc which we will talk later once and if we get the M-Slaz in our country.

Apart from this, the street motorcycle sports a very peculiar never-seen-before headlamp design. Basically, the complete headlight assembly is divided into two parts – the bottom portion has twin lamps and stacked over is a single headlamp unit. Like you, we were also very curious to understand how does it light up since none of the pics showed the headlamps illuminated.

A portal called as saiisoku.com has posted photos of the 3 piece headlamp in action and here they are…

It must be known that both the headlamp and the tail lamp of M-Slaz are LED units. We have asked top Yamaha officials about the launch of M Slaz in India multiple times, however, they have always declined to comment on this. Though nothing is confirmed, but considering the rising competition, they may consider bringing it here…