As we informed you in April this year, LML has relaunched its 110cc Freedom motorcycle with quite a few betterments. LML, the much-remembered corporation which dished out the Energy FX and the Adreno FX motorcycles along with iconic Italian manufacturer Piaggio, had been cruelly pushed to the fringes of the Indian automotive arena after they parted ways with their erstwhile partner Piaggio in 1999. 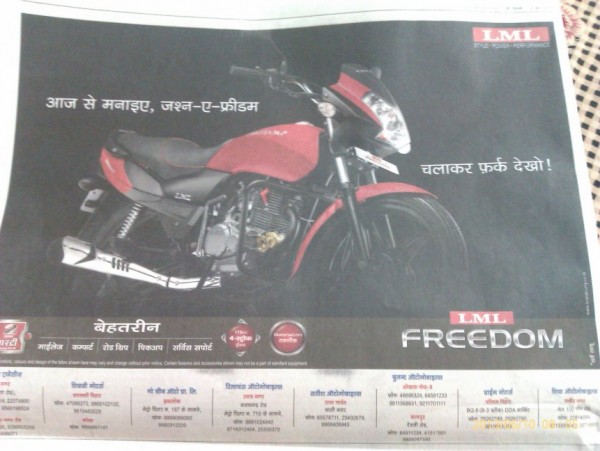 The company has been beleaguered since then and had been even registered as a Sick Industrial Company under the Board for Industrial and Financial Reconstruction (BIFR).

However, the corporation is not dismayed by these setbacks and has set its eyes on breaking free from the self-imposed shackles after the break-up with Piaggio. They have a product launch blitzkrieg lined up in the coming months, possible candidates being a two-stroke scooter “NV” and a new gearless scooter called “Star Automatic”, as reported by us earlier. They even harbor hopes of setting a foot in the 125 cc and 150 cc category of motorcycles as well. However, it is an old workhorse of their’s that is about to open their second innings, albeit in a revamped form.

The 2013 iteration of the Freedom 110 cc carries forward a lot of genes from its earlier avatar, but does come with a few changes. It sports a dual-tone color theme and comes in five shades: Red, Black, Beige, Silver and Blue. Though it is obvious that black would be the base color and the other ones would be the overlays, we just can’t seem to figure out how the black option will be available in the dual-tone option. Nevertheless, there has been a splattering of black all over the bike, with the engine, alloy wheels and the silencer as well sporting this color. 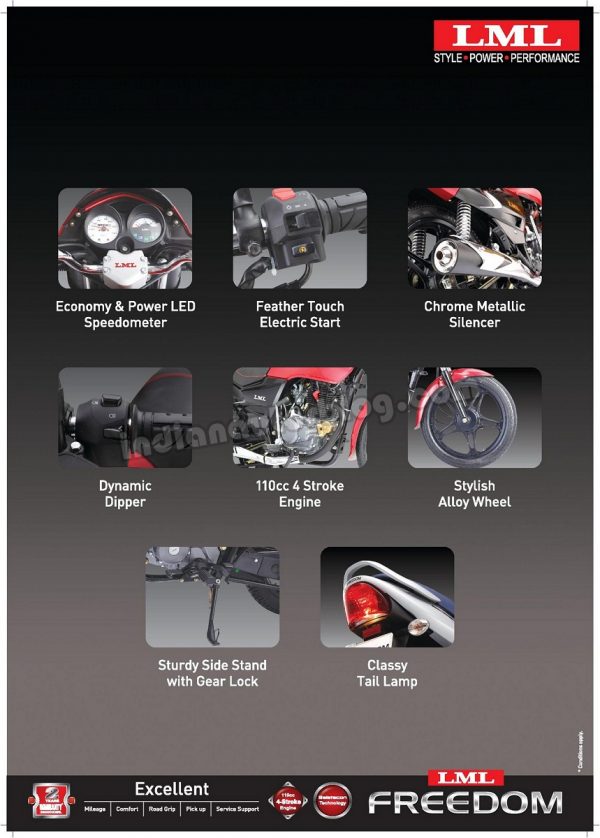 Moving on from the paint jobs, there isn’t much to write about the styling changes. It’s the front cowl that seems to have gone under the knife for a slight tweak, and probably the seat too. Other than that, the Freedom 110cc appears to be pretty similar as compared to the earlier offering. Nonetheless, the alloy wheels are a smart addition and the generous lapping of chrome on the exhaust lends a touch of class.

The 2013 Freedom is powered by the same 110cc mill, but we haven’t been able to get hold of the specifications. It is reasonable to assume some tinkerings with the mill, to offer a better combination of power and fuel-efficiency as compared to the earlier edition. Some changes take place in the cockpit, with the introduction of LED lights to indicate the rider’s style of riding from among two modes; Power and Economy. The console does look dashier, and there’s something called a “Dynamic Dipper”. Unfortunately, no word on it as well.

A First-in-Class feature is the side stand with a gear lock, which doesn’t let the cogs to mesh incase the side stand is down. It’s a good safety feature provided by the company, which is generally offered on higher segment bikes like the GT250R Comet we tested (Read Review).

The LML Freedom is available as two variants – DX and LS. The Freedom DX will cost you Rs. 49,410 and the Freedom LS will set you back by Rs. 49,950 (ex-showroom Delhi). The 2013 Freedom 110 cc seems a tough steed to us, though we desperately want a rework of the ugly-looking tail-lamp.

Do you feel the 2013 Freedom will be able to survive in an already cramped pool of commuter bikes?