In the form of Pulsar AS200, while they may not say so, but Bajaj has introduced the successor of their fantastic seller, the Fastest Indian Pulsar 220. However, for the coming many month, we do not see the Pulsar 220 getting axed simply because Bajaj can not afford to discontinue a bike which is earning them as many as 8000-10000 units (including Avenger) every month! And they clarified this at the launch event of their Adventure twins on 14th April.

Now that both the bikes will co-exist, if it is getting difficult for you to chose, we list a quick price and spec comparo of these two bikes along with differences between them!

The Pulsar 220, despite being an old horse, still manages to hold its head high when one talks performance. Both of them get front and rear disc brakes and projector headlamps (on low beam)… Let us talk then….

Here is what separates them…….well basically everything! 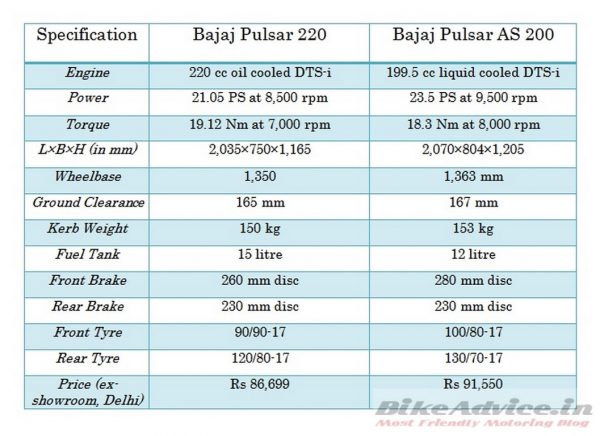 Frankly speaking, Pulsar AS200 outdoes the 220 in almost every department if we talk about technology and as an overall product. It is a much better finished product, is superior in performance and is more upto the times against the old 220. But, the grunt of the older 220’s engine and that typical Pulsar feel is what pulls you towards it! We still see at least 50 percent of you reading this picking up the 220 over AS200 after a brief test ride of both of these…