Talking about the Honda Stunner, it’s one of the decent 125c.c bike around with some pretty good styling attracting a lot of younger crowd who wants to step-into the biking world with their parents suggesting to go for Honda’s as they all know that they are pretty faithful on the long run. With the recent addition of the PGM-FI version to the stunner family the bike has become more advanced with some good fuel efficiency and bhp figures attracting even more crowd, but here’s the catch! The addition of PFM-FI and some painting skills to the bike and the bike shouts out a premium commanding price that burns a big hole in our pocket for a 125c.c segment with a mere 0.6bhp increase from the carburetor version. As bigger is always better, let’s see about this bike and the latest soup cooked for this bike in detail. 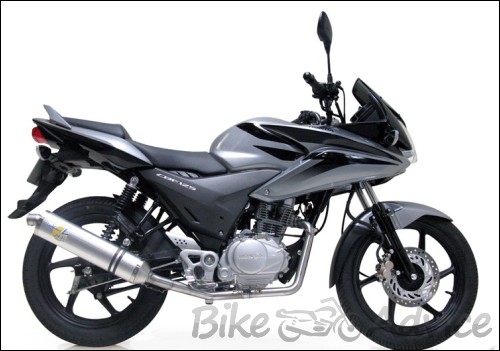 The heart of the Stunner CBF PGM-FI is a four stroke air-cooled 124.7c.c SI engine that churns out 11.6bhp at 8000 rpm with a torque of 11.2Nm at 6250 rpm which is pretty impressive for a 125c.c bike that is even more futuristic, with the addition of an advanced PGM-FI. The bike has a five speed gearbox and the shifts are absolutely butter smooth and one of the trademarks of Honda. And for the bike freaks who just start their biking career on this bike and who wants to do more to make the bike faster, will have to start thinking about what can be done to beat the other bikes in the category, and for those of them here comes the good news.

Heard of “LeoVince”? Yes, one of the best exhaust manufacturer based in USA has made a factory exhaust system for the Honda CBF Stunner that gives 10% power increase, 10% torque increase between the power band from 3500 rpm – 5200 rpm and an advantage of reduced weight and finally here comes our favorite, the amazing exhaust note that turns heads everywhere.

The LeoVince slim style factory exhaust has an unique oval shape with oval sides with an interesting flat top and bottom sections. The exhaust is encased in lightweight brushed alloy with a short 420mm body and a 60mm tail pipe which is linked to the engine with universal standard AISI304 stainless pipe work with racing type header fitters. The exhaust is finished with a genuine carbon fiber support strap, a light weight mounting kit and a 3D finish “SBK” badge. The exhaust is fully road legal in USA and has a removable baffle for a louder sports sound. Sounds pretty interesting eh? Here’s the more interesting news, this exhaust if needed one has to import from USA to India, and secondly the power increase is just marginal. The exhaust installed in the U.K version of the stunner just produces 0.9bhp increase over a stock bike that carries 10.8bhp as factory standard. The exhaust also commands a premium price and at £350 Inc vat approximately Rs.24,000 one has to think over souping their stunner seriously.