UM had one of the most interesting offering of the Auto Expo – the THOR electric motorcycle. There were tons of e-vehicles at the Expo but Thor is world’s first geared cruiser and it has been launched in India. Here is a look at what’s on offer…

Thor features an electric asynchronous three-phase induction motor which is liquid cooled and is capable of producing 30 kw (roughly 41 PS) of power at 8000 rpm and 70 Nm of torque. It is mated to a 5-speed gearbox and a regular clutch – how would it ride is what will be interesting. Like others, this cruiser is also belt-driven.

On the design front, it looks like a typical chunky cruiser and not a shrunken make-shift e-vehicle.

UM claims that with the fast charger Thor’s Lithium Polymer battery can be charged upto 80 percent within 40 minutes. 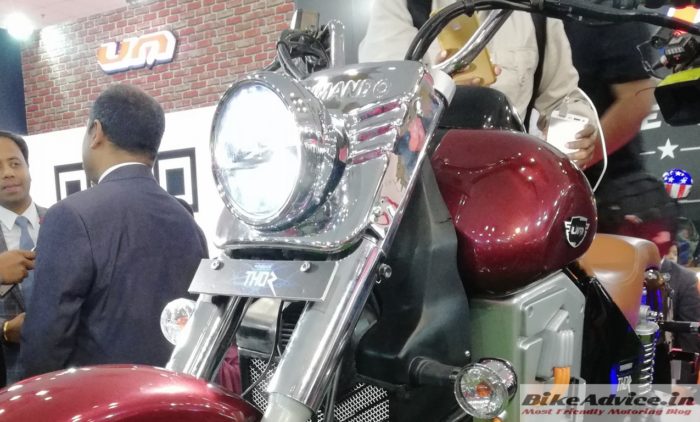 Bookings of Thor were announced to commence from April 2018 for the first 50 customers but there is no update on this yet! Each of these early birds were announced to get deliveries of their motorcycles at UM’s Italy-based plant (in an all-expense paid trip). Moreover, UM is also offering a 2-year free-charging program to all Thor’s customers in which they can charge their cruisers at any UM’s dealership in India absolutely free of cost!

In short, UM really delivered a surprise package in the form of Thor – a motorcycle which takes care of the ‘practical’ aspect at the same time not being a miser in terms of performance. But when is it coming is not known….