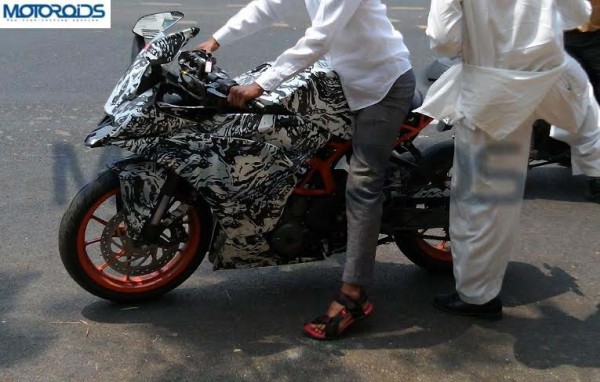 Two of the most awaited performance motorcycles in India are, without any iota of doubt, KTMs RC200 & RC390. While it is understood that the RC390 will be the first one to be launched in India, RC200 will make way sometime later, but surely within this year!

We have a new set of spyshots of an RC mule spotted somewhere in Pune by a Motoroids.com reader. Though there is no concrete proof that the mule in question is the more powerful RC390, let us believe it is, considering that it is coming to us earlier within a few months.

Once you are through checking out the spied mule, I am sure, your eyes would not have missed those sandals and Kurta Payjamas of the two people who are astride the motorcycle. Under no obligation shall we believe that these are company testers, but a big possibility of Bajaj KTM performing real life tests by giving close-to-production or production-ready specimens to identified Aam Junta!

Nonetheless, talking about the mule, we see the interesting foldable RVMs (rear view mirrors) appear to have a big-enough viewing span and beefy chalks to hold them tight (hopefully). The rider’s feet barely planted on the ground also give us a hint of the extent of the height of the high saddle height which is 820mm according to official figures. In comparison, Pulsar 200NS, already cribbed about for its relatively tall seat has a seat height of 805mm. 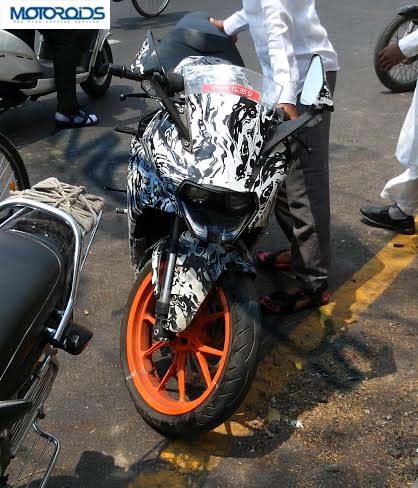 We love that integrated rear seat which gels so well and appears to be a cowl but wonder about its comfort for the pillion. In terms of specs, RC390 will produce 43bhp of power from its 373.2cc single cylinder engine which is the same as Duke 390, albeit with a few expected tweaks. Consider that with the low weight of 147kg and you would understand, what rocket this machine would be!

Price is expected to be around 2.3 Lakhs ex-showroom but we will not be surprised if Bajaj KTM plans to give us another pleasant shocker like they did for the Duke 390!