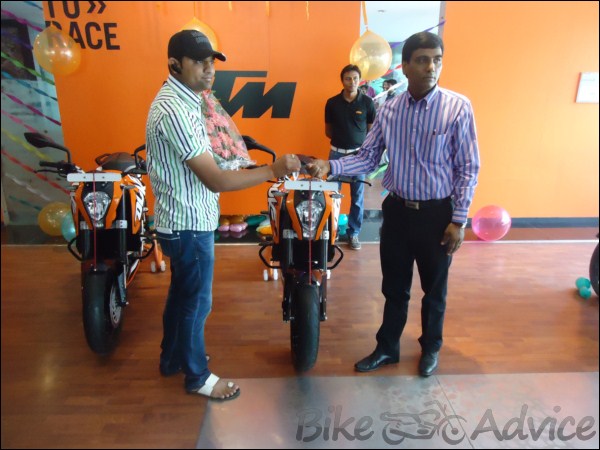 Mr. Shanakar, Area Manager (Gujarat Region) Bajaj Auto, said “We have very good response of KTM Duke 200. We have registered 35-40 bookings within less than a month in the city of Ahmedabad alone.” When asked about the target sales of KTM Duke 200 for the region of Gujarat he said that the sales of KTM Duke 200 depend upon the delivery and they do not have any specific target as demand is greater than supply. When asked about the Puslar 200NS launch in India, he said it will start in the first quarter of next financial year. He also added that the final details for the availability of Pulsar 200NS in Gujarat will be available after the regional dealer meeting.

When asked to buyers why they decided to buy KTM Duke 200, they said that KTM Duke 200 is a very different looking motorcycle available in the market. It’s technologically advanced and has some of the unique features which are not available in other motorcycle. Pratik Bhavsar, who also owns Kawasaki Ninja 250R said that he liked the bike’s unique feature such as advance digital instrumental panel which is not seen even on the top end motorcycles, central exhaust, rotary sound of exhaust and orange color which is rarely seen on other motorcycles.

With more than 1,000 bookings across the nation within short span of a month KTM Duke 200 is now ready to top the sales chart. However, the sales purely depend upon the availability of Duke 200. It seems that Duke 200 will surely win the heart of many buyers who are not fuel efficiency conscious.