Mattighofen in Austria is nowadays buzzing with activity, and Stefan Peirer is a very busy man these days.

Ever since KTM SportMotorcycle AG shook hands with the world’s third largest motorcycle manufacturer ( No prizes for guessing ! It’s none other than “Hamara Bajaj ), it has been enjoying a free-run. Thanks to Bajaj, KTM’s snazzy products are gaining a strong foothold in the developing markets. But this isn’t all, yet ! 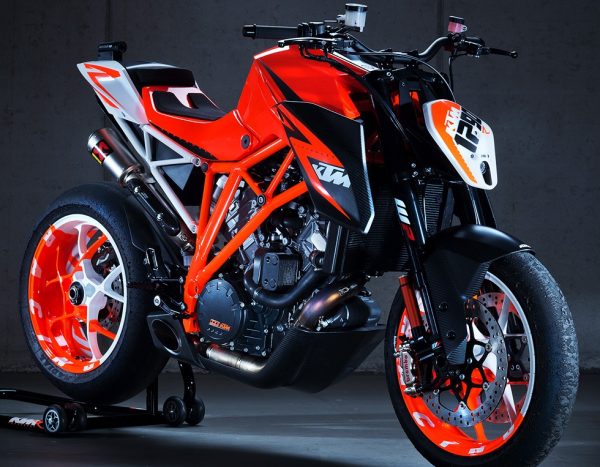 KTM seems to have developed a penchant for edgy, lean-mean and evil-looking machines. Written Rules and Conventions don’t just exist for them, they enjoy treading the less-travelled paths ( Did anyone just say Off-road ? ) and employ some really outlandish-yet-eye-catching designs. Their 1290 Super Duke R does absolutely nothing to break free from that self-imposed image, infact it takes all the famed “Hooliganism” to another higher level!

The prototype was uncovered at EICMA, Milan last November. Here’s a taste of what’s to come !!

The 1290 Super Duke R’s profile assumes a crouched, somewhat hunch-backed look. Apparently, it’s the Demon-Inside-It that’s biding it’s time and waiting for the moment, that moment when it will leap into action and leave all others far behind.

It carries the trademark KTMesque “In-Your-Face” design cues. Lots of spyshots are flying around in the web, and there’s no common headlamp design among them. In one, it’s bulbous and large whereas another spyshot shows a sharper front end. Nevertheless, it’s still in sync with KTM’s eccentric styling.

The colour scheme of red-orange along with white is fright-inducing, and will certainly put your eyes to their limits. KTM has again put the rulebooks to the dust by introducing dual-tone wheels. The exposed trellis frame along with the macho-looking fuel tank shell is comparable to the Demon’s sinewy torso. A generous dollop of carbon fibre does spruce up things in the fenders and the tank-flap area. 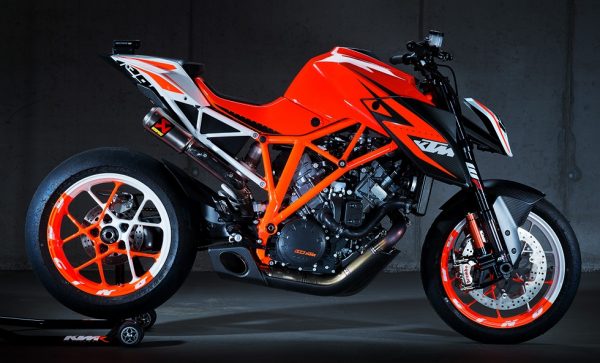 As the trend catches on, yet another bike’s rear seat appears to leave a lot to be desired in terms of pillion comfort. Though it’s seductive to look at, you probably have to be content with riding without your beloved on this one.

Satanic, isn’t it ?? Well, read on as more facets of this Machine are uncovered.

The mill that will push the 1290 Super Duke R forward will be a bored-out version of the 1190 RC8 R’s heart along with Drive-by-Wire system. Speculation is wide spread, with the expected power figures somewhere being in between 180-200 hp. It will carry a lot of electronic bells-and-whistles to augment the rider’s safety. ABS, Traction Control, Anti-Wheelie as well as Anti-Stoppie Controls will be incorporated. But according to KTM it will be the discretion of the
rider to employ these goodies or just trust plain, damn-old motorcycling skill. So you can still set eyeballs rolling a la Rok Bagoros, no worries on that count.

The potent V-Twin engine is mounted on a chrome-molybdenum steel tubular frame. The one-sided aluminum swingarm is specifically designed to let the two-tone colour scheme of the wheel out in the open for everyone to appreciate. 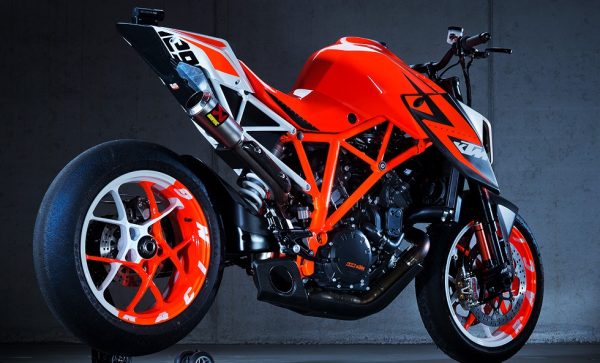 As far as suspensions go, the bike is expected to be fitted with WP upside-down forks with gas-pressure reservoir and a direct-link WP rear shock. Though it’s pretty hazy at the moment, the Super Duke should sport light alloy wheels with racing slicks as well as Brembo Racing Calipers.

WHAT THE HELL IS KTM DOING ???

After having ditched everything that is not absolutely necessary, this KTM machine is probably going to boast of one of the best power-to-weight ratios, standing shoulder-to-shoulder with the Ninja ZX-10R, BMW S1000RR and Ducati Panigale 1199. And it will certainly be a lot more comfortable due to a street-riding position.

But don’t they give a damn about wind blast ?? Anything above 140 kph without a fairing is quite disconcerting and jarring, it still remains to be seen if the full potential of the 1290 Super Duke R can be unlocked.

Have you seen anything more menacing?

Spec-Chart Geeks, do forgive us this time ! What we have is not exactly what you call “numbers” !!