This is a review of Kawasaki ZX Ninja posted by Rahul from Chandigarh. I thank him for sharing his experience and photos with the readers of BikeAdvice 🙂

I was always a fan of cruiser bikes. I did not like sports bike at all. But it was the sound of an inline four that turned me on to look into sports bikes. Hayabusas were everywhere. Then it was one of my friend who suggested to buy the Kawasaki ZX Ninja. 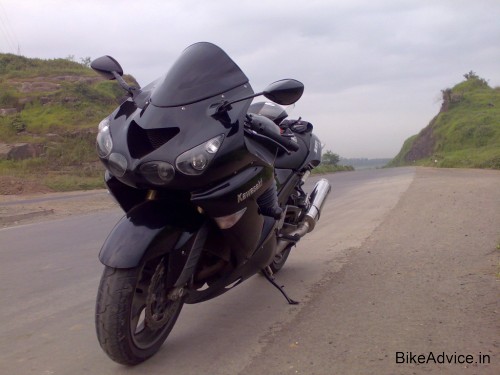 When I saw the bike, I was just taken aback by the awesome & different looks at first & then by the roar of the engine sound. It was a class apart. The most powerful production bike ever made. Got used to the bike’s speed & handling by riding a few months of stock set up. Kawasaki ZX Ninja’s entire character changes post 6,000 rpm. The sound, behavior everything changes & obviously this is due to the huge power boost from 6,000 rpm as the secondary valves open up. This was done by Kawasaki to keep the emmisions as per regulations. 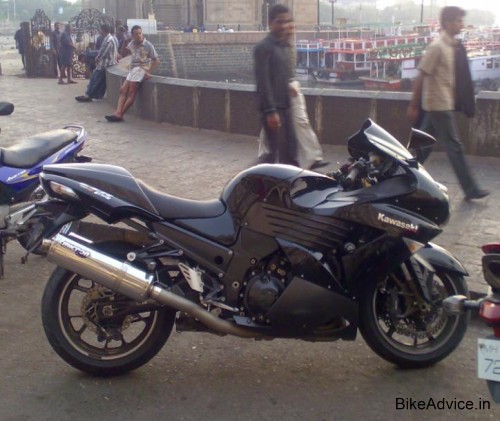 Post getting used to this. The owner of HPC, Greg, helped me set up the bike to come somewhere close to the bike’s potential. The secondary valves were removed, PC3 was mapped & set up. Steering damper, race filter, the speed limiter removed etc were added & that’s when the real Monster was unleashed. Power generation now started from 3000 rpm. In my quest to pass the 200 mph mark, my Kawasaki ZX Ninja 14R was well on its way. 285 kmph has been touched till now. Target is to pass 325 kmph 🙂 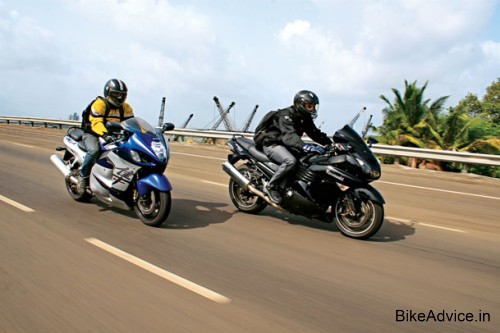 What I like about this bike is that you just feel like you are sitting on a 400cc bike. Riding position known to be the best in hyperbikes. It is the fastest bike in the world, there is no overheating problem. The only regret I have about this bike is that it is hard to turn the bike around in traffic. Other than this, I truly adore every aspect of this beast.