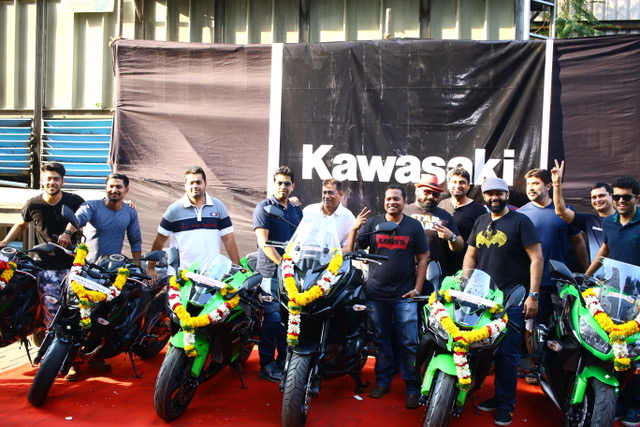 We did not publish this report earlier but were in contact with the deprived customers who were duped by Kawasaki’s now defunct SNK Palm Beach dealership. We also tried to understand Kawasaki’s version of the same and were assured that things will get resolved. Here is what transpired…

Kawasaki India has taken the right step forward and delivered 13 swanky new motorcycles to the aggrieved customers. The customers had been waiting to get their motorcycles for more than 6 months now. The SNK Palm Beach dealership had not delivered motorcycles despite taking full payment from some. In fact, a few out of these had even started paying EMIs (for something that did not get delivered to them!)!

The Japanese bike maker, which presently retails 5 CKD models and 8 CBUs imported from Japan, has officially communicated that they have ensured that this issue goes to a favourable closure by delivering motorcycles to the customers, which was a responsibility of SNK Palm Beach dealership in Mumbai. Earlier, Kawasaki had terminated all ties with the fraud dealership on 1st September 2016 and now they have announced that they will take legal action against them.

Unlike some, who are born with an ore of platinum named after them thanks to some long forgotten will, most of us buy a motorcycle after meticulously saving every penny from our hard earned money. Mandheer was one fine gentleman who booked a swanky new Kawasaki Z800. Before this, he was a proud owner of a 2012 Ninja 650. Wanting to upgrade, he sold his bike off and after a down payment of Rs 4.25 lakhs, got the rest of the sum financed from a bank. Little did he know that this was just the beginning of his trouble.

The Kawasaki-SNK Palm Beach fiasco has been a hot topic for motorcycle enthusiasts in the country. Every biking forum is talking about it. Mandheer got in touch with us and informed…

“Recently, it has come to the notice of India Kawasaki Motors Pvt. Ltd.(IKM) through social media sites and customers, that SNK Palm Beach has a long back order of motorcycles pending delivery to certain customers.

IKM would like to clarify that SNK Palm Beach is an authorized dealer of Kawasaki and is responsible for sales and delivery of Kawasaki motorcycles to its customers. IKM takes customer satisfaction very seriously and is doing everything in its power to solve this issue as soon as possible. We are now communicating with customers to understand their issues and in turn, instruct SNK Palm Beach to satisfy and resolve these issues at the earliest. Please accept our sincere apologies for these delays and thank you for being patient and supportive.”

“The general public is hereby informed that we, India Kawasaki Motors Private Limited (“India Kawasaki Motors”), having our registered office at Bajaj Auto Limited Complex, Mumbai – Pune Road, Akurdi, Pune, Maharashtra – 411 035, had in the year 2015 appointed SNK Palm Beach, having its premises at Shop No. 6 & 7, Plot No. 3A, Gahlot Majesty, Palm Beach Road, Sector 46A, Seawood Nerul West, Navi Mumbai, Maharashtra – 400 076, as a dealer for the sale of Kawasaki motorcycles imported or manufactured by us.

Hence, we have terminated the dealership of SNK Palm Beach for Kawasaki motorcycles.

Just to be doubly sure, we connected back with Mandheer to understand if the statement issued by Kawasaki is true. He acknowledged that he has received his motorcycle along with others day before yesterday. While Kawasaki did the right thing in the end, but an incident like this should have never happened.