According to concrete news, Japanese two wheeler manufacturer, Kawasaki is planning 3 new models for 2011, two based on a 400cc engine along with the 2011 special edition of Ninja 250R. According the latest information received through official company news Ninja 400 would sport a 399cc 4 stroke Liquid Cooled Parallel Twin engine with 4 valves per cylinder. 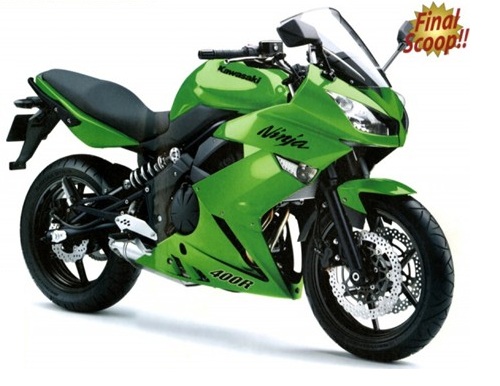 We enlist the various revelations that have taken place so far.

Kawasaki has made it clear that this bike will not be made available in the UK market. No mention of the Indian market has been done. But only if wishes were horses, we would expect this bike to make it to India majorly because of its homogonous practicality as compared to 600-650cc or the current liter class and above insanities! It produces ample amount of power to burn the roads in any kind of imaginable way possible in India at the same time being slightly lesser in acceleration (hence more controllable) at a sudden raise of a throttle making them safer to operate (read ‘ride’). After the official foray of company’s fully owned subsidiary in India very recently, conditions and equations do become very ripe in favor of launching of this bike in India.

If we are allowed to speculate in whichever way possible, we will step ahead and even try to dilly dally with the pricing part. Considering that Ninja 250R (producing 33 ponies) retail at upwards of 3 lakh Indian grands and the touted 650R (producing 70 odd bhps) comes around the 6 lakh (on road) bracket, this bike (producing 44 horses) would very much find a very good place at around 4.5 lakhs and with the kind of looks and specifications this bike boasts off, we are sure it would find many takers as has been the case with success of 250R as well.

Ok enough of wild guesses and calculations; we are keeping our fingers crossed, are you? We would like you to leave comments for this machine. Who knows Kawasaki is listening!