It has been quite simply the most awaited bike on Indian soil, the Kawasaki Ninja. A thoroughbred in every sense of the word, over 25 years of evolution has culminated in this beauty of a machine. We managed to get an up close and personal look at the machine. 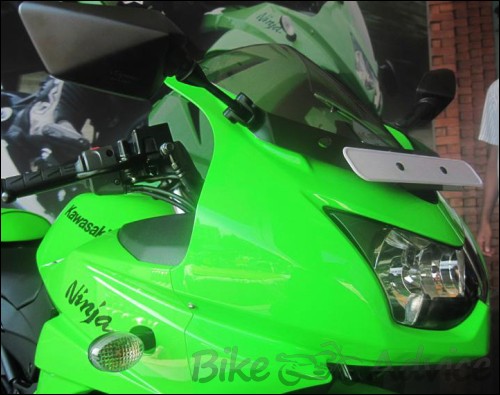 As speculated earlier, the bike features a twin cylinder, 250cc fuel injected engine that produces 33bhp which is mated to a six speed transmission. Top speed is claimed to be somewhere around 175Kmph. The bike is imported in parts and assembled in India by Bajaj, which helps in keeping the costs lower than what it would have been to import it as a completely built unit. The on road price stands at around 2,95,000 Rs which happens to be quite a lot, but considering the fact that Bajaj have managed to sell about 170 of these machines since its launch, it has been quite a success.

It features several advances in engine technology such as direct valve actuation and thick pistons along with a Denso radiator which ensures that the engine performs consistently during hard riding. Two catalytic converters are used in the exhaust system, and automatic cam chain tensioner is integrated into the engine that avoids looseness and chain slack hence lowering mechanical noise. The six speed gearbox uses a clutch damper that reduces jerks at low speeds and offers a smoother pick up. 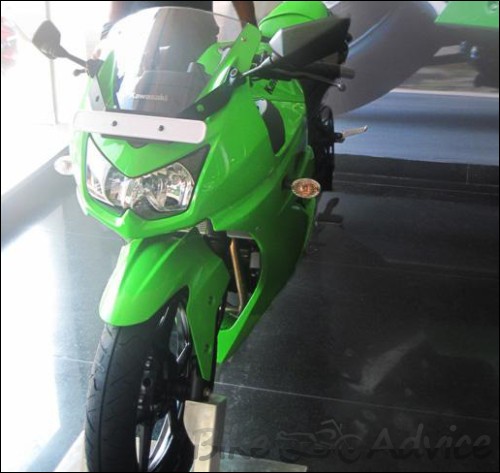 It has a diamond-style frame made of thick steel tubes which translates into high stability and stiffness at high speeds, this frame has been a tried and tested model that has evolved from over twenty years of existence, it carries on with an improved feel over the previous iteration along with new improved materials for light weight and rigidity. The engine with the parallel dual cylinder setup centralizes the bulk of the mass which improves handling.

The front features an inverted shock absorber that has a travel of 4.7 inches and a Uni-Track rear mono-shock that travels 5.1 inches which also happens to be adjustable. The brakes are massive with petal discs for the front and rear. A 290mm disc does the job up front while a 220mm takes care of things at the rear. A slight disappointment would be the lack of colour choices available for the bike, you could coose from Midnight Black or Lime Green and that’s about it. The US market gets to choose from 5 different colours, so we are not sure if Kawasaki will introduce more, but for now these are the only two on offer. 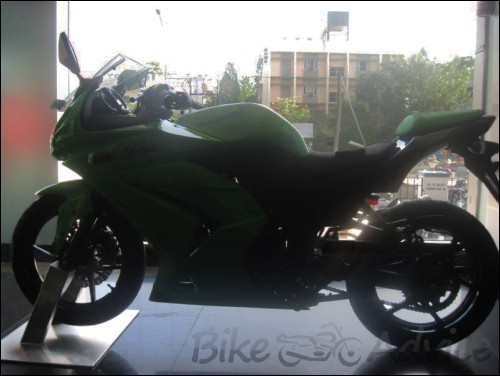 The fuel tank has a 24 litre capacity. One flaw that you may notice is that this bike does not have a fuel gauge, There is, however a low fuel warning light so if you happen to see it lit up, you better be heading to the nearest gas station. You would find two hooks under the rear seat that allows one to anchor or tie anything on to the bike with the help of a cord; also the rear seats feature an elastic band that makes it easy to quickly fasten something on. 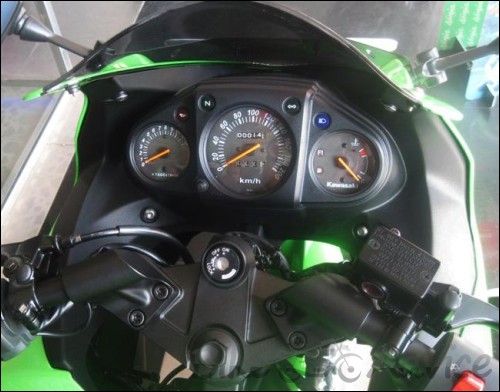 The instrument cluster unlike most new bikes in India is a fully analogue one and does quite a good job in representing all the numbers that really matters. It houses the tachometer, speedometer, trip meter, temperature dial and warning lights. A shift indicator can also be found residing on the top of the rev counter.

On the whole, it is a great overall package which happens to be practical; the fuel efficiency is on the low side with Kawasaki claiming around 20 to 25 Kmpl. The 2009 version which is on sale here features some minor changes over the 2008 one, the most visible one being the silencer which is now matt black with a chrome tip instead of the full chrome finish. So, a Maruti Suzuki Alto or the Ninja 250? You decide…