As we all know that Ninja, the quarter liter sports bike for India, with all those tech savvy features that can be used as a tourer and as well as a track tool is sadly priced as high as taking a personal loan and paying EMIs for the forth coming years. What we have a choice is now to narrow to two of the rivals that can be at least half the way affordable and can give the thrill that most of the Indian bikes can only dream of, yes the Yamaha R15 and the all new Hero Honda ZMR. Speaking of both the bikes the story turns at all the twisters revealing what both the bikes are capable of. 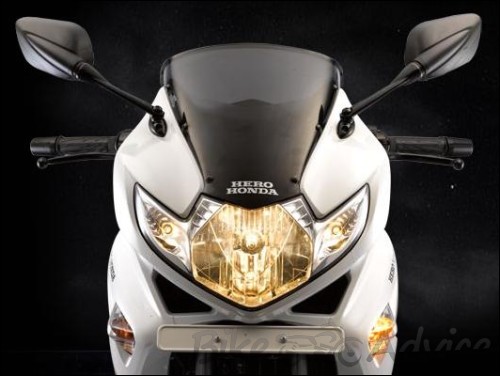 Let’s start about the R15; the bike comes from a legendary Japanese hand that makes the R series of bikes which rule the world as well as the tracks. The R15 sports a 150cc liquid cooled 4 valve SOHC engine that churns out 17PS of raw power at 8500 rpm with a torque of 15Nm at 7500 rpm. The bike features to be a first four stroker to have a six speed gearbox in India that is a boon for tourers and thrill seekers and also has an engine that will never run out of breath. The engine is powered by a fuel injector that eliminates the hassles of adjusting the air fuel mix when climbing hills as done on a conventional carb and also gives a long stand during touring.

The proud and the boasting factor of the bike is that the bike just weighs 131kg and with the above mentioned specs, the bike is all game to set the road or track on fire. The story of dual suspensions at the rear is just a history at Yamaha now, as they have given the best monocross suspension to the R15 which also adds style to substance. The electrical is a full DC system and boasts a twin headlamp as seen on the R series. The bike is a real fun to ride at high speeds and with a great speed comes great stopping power, the bike comes with disc brakes at both front and back from the legendary manufacturer Nissin that puts a stop to speed from the word brake. Although the bike is a bit sluggish at the lower rpm’s the bike compensates this by giving the rider a nerve chilling experience at higher rpm’s. The point is that the bike is capable of doing 120 kmph without any struggle and can be so much fun to ride.

Now looking at the rival Hero Honda has launched the all new ZMR that has come with almost all the goodies that the R15 sports about. Let’s see what the ZMR has: the bike comes with a full body fairing similar to the R15 and has a love me or hate me looks. The bike also has a signature all new front fairing that resembles the Suzuki GS150R, although Hero Honda claims that it’s not a design that is inherited for the Suzuki but for the onlookers it’s just a bigger version of the same.

Coming to the engine the bike still has the same capacity engine with 223cc 4 stroke single cylinder OHC with an addition of an oil cooler and with the added advantage of the FI. To be precise the ZMR carries the legendary PGM-FI that Honda has developed for it’s bigger sibilings. The power has increased by three quarter of a grain that churns out 17.6 BHP at 7000 rpm with a torque of 18.35 Nm at 6000 rpm. The company also claims that the bike can do a 0-60 KMPH in 3.7 seconds with a top whack of 126 KMPH.

Although the bike’s oil cooler cannot be compared to a liquid cooled engine but it’s decent enough with a nice punch that cools the engine better than the air cooled one. The ZMR also has both front and rear disc brakes that also comes from Nissin which has pretty good stopping power. The ZMR has been equipped with 5 step adjustable iGRS shocks that adds comfort for long touring. The bike also has the same rim size as it’s older brother that makes touring a walking on the cake and to add the icing is the tubeless tires that comes equipped with the bike. The bike with all the new features also comes with an additional weight tag that weighs 159 kgs which is nearly 20 kgs heavier when compared with the R15 that makes the R15 lightest and also the fastest. The ZMR is also packed with the best looking speedo console that actually scores over the R15 console with a welcome message to the rider which actually feels warm when turning the ignition on. Hero Honda have also given the ZMR the all new clip-ons that are real wide, with a relaxed seating position which is a boon for tourers. To sum up the bike, the Tourer has become a better Tourer.

Now coming to the pros and cons of both the bikes, lets see how the Yamaha R15 scores over the Karizma ZMR:

As Hero Honda has launched the ZMR after much anticipation, there are also some pretty good features that the R15 misses out and where the ZMR scores

To sum up the comparison, both the Yamaha R15 as well as the Karizma ZMR has equivalent points to justify their price tag and it lies in the hands of the rider who wants to choose in between a screamer and a proven tourer. 🙂