Seldom do we come across people who decide to make footprints rather than follow them, John Britten was an extraordinary individual who struggled to create a bike that not only was radically different but was also better than all of the motorcycles produced by big names like Ducati and others. He never had a multi-million dollar factory and a management crew to help him, his factory was his own garage, his management, was himself. 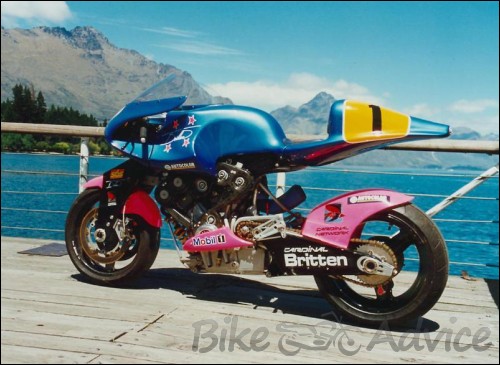 He singlehandedly built the Britten V1000, which for once proved that an open mind is an unbeatable spirit in its own. The machine was built at his home using makeshift furnaces and ovens from the kitchen, not only did the bike beat Ducati’s around race tracks, it set new records at several race tracks around the world. Read on as we take a look at the extraordinary story of a man who by himself, made a mark in motor biking history.

During his early days, he was a dyslexic, questions had to be read to him at the examinations and answers were recorded by a writer. Clearly none of these hurdles stopped him becoming the remarkable individual that he would become. He completed a four-year mechanical engineering course and soon got a job as a cadet draughtsman which bought him plenty of work experience in a lot of different mechanical engineering methodologies like mould design and pattern design. Soon he travelled over to England where he landed a job on an important highway project. He continued this job for about 4 months after which he headed over to his home town of New Zealand and worked on all sorts of engineering projects.

They say when you observe, you can improve, John Britton in the early 1980’s had a vision that the traditional motorbike design can be improved by leaps and bounds with an open mind, of course, he couldn’t just walk into a motorcycle factory and ask them to do so. Hence, in his spare time, he drew engineering diagrams, of bikes with changes so radical that some even doubted its roadworthiness.

Soon diagrams evolved into prototypes, each part was built by hand in his garage and his backyard, his furnace? A makeshift oven that he had to manually heat with gas and wood; he used this to make the components of the bike. It was never an easy task, getting the process right was a harrowing process, since he had considerable experience in such tasks, he was quite adept at it. Days and months passed by, he had fully fabricated the engine by himself. The gearbox for some reason was sourced from a Suzuki motorbike. This marked the completion of the most vital component. He then went on to complete the chassis components, radiator and the engine management system.

By the time it was complete, it was the most radically designed bike ever. There was no frame to begin with, the engine was the stressed member, the radiator was under the rider’s seat and the rear suspension shock absorber was located at the front of the engine. Materials used were of the best available and exotics like carbon fiber were almost everywhere. As soon as the exterior was done, it was time for the test ride. He wanted someone who could fearlessly take the new untested machine, to its very limits, he could hire a race track but the difficult part was to find the rider, there weren’t brave ones who could take this never-before-seen machine out into the open. Finally, a rider showed up and offered to test it. Off they went to the nearest track, Britton stood at the highest place he could be at to be able to understand the way the bike handled.

He was really in for a surprise, for most of the time, he could see the front wheel climbing upwards on the straights and coming down just before a turn, the bike was ridden hard and with the help of the onboard data logger, the engine data was monitored. Soon they started doing a few top speed runs, the track had enough room on the straights for the rider to be able to crank the maximum out of the machine. The first attempt did not attain much success as the bike didn’t feel stable enough. At the second attempt though, Britton saw his dream crashing down. The bike was hovering at around 250Kmph, in the blink of an eye, it was in pieces, the bike simply broke apart, in half and was all over the place. The rider was seriously lucky to be alive. At this point, Britton called it off and headed straight to the garage with the destroyed bike. He examined the parts where it went wrong. He was persistent; it required something more than just a failure to pull him down.

Failure is the stepping stone to success; that was the quote Britten proved right at the next test session, this time with improved components, another rider and a whole new level of optimism. The bike went on even better than ever before, to record a top speed of 303 Kmph. At last, he built a machine that challenged convention and set records in the process.

Britten was very keen in showcasing it to the world; he created the Britten Motorcycle Company in 1992 where he produced machines with the same level of uniqueness he was known for. He hired the best racer he could lay his hands on and privately funded a racing team, his bike entered races, winning every single one of them, showing the big fish how to swim. Ducati were the ring leaders at that moment in time, during the final races all you could see was a Britten V1000 with the front wheel high up in the air, crossing the finish line with a red Ducati following far, far behind. All this from a machine built in his own backyard. His team was the most successful private team in the history of the sport. His bikes set numerous speed records all over the world and gathered an iconic status.

But sadly in 1995, John Britten died aged 45, after an illness related to cancer. His machines are among the most prized motor bikes in history, Only 10 have ever been built plus 1 prototype. There is simply no other story of such a personal success in motorbike history, defeating the world’s best with nothing but passion, zeal and fervor. John Britten.