Mahindra Racing Team is the first Indian MotoGP factory team which entered into motorcycle racing as a participant in the 125cc class of the championship. The team is all set to enter the Italian Motor Racing Championship in the 125cc class with Indian rider Sarath Kumar. 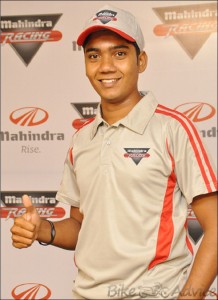 19 year old Sarath Kumar is the first Indian to participate in the MotoGP 125CC World Championship. He was the 2010 National Champion of India in the 165CC Expert class and the 2008 National Champion in the130cc 4 stroke novice class.

Talking about the team’s new rider, Mufaddal Choonia, Team Principal, Mahindra Racing, said, “We are proud to announce our entry into the Italian Motor Racing Championship with Sarath Kumar. This is a conscious step being taken by Mahindra Racing to nurture and grow riding talent in India. Some of the best names in the World MotoGP championship like Valentino Rossi, Giacomo Agostini, Marco Melandri have been Italian Championship winners. Riding in a championship with such high standards of competition would be a great opportunity for Sarath. This will provide him with the right opportunity to hone his skills and compete at the international level with some of the finest emerging talent in motorcycle racing.”

To mention about the other rider, the 26 year old Riccardo Moretti started his racing career in cross motorcycle racing but had to give it up owing to a serious accident right at the age of 16. Following a 3 year break from his racing career, Riccardo restarted a career in road racing at the age of 19. In the year 2007, he finished 5th in the Italian Championship and then went on to finish 2nd in the year 2008, with just 2 points difference between him and the winner. In 2009, he won the Italian Championship with an amazing 5 wins and 5 pole positions in 6 races.

The Italian Road Racing Championship is the leading national track competition held in Italy. It is a launch pad for Italy’s best young motorcyclists as they head and March towards the international arena. It is staged on the country’s best racetracks from the month of March to October over six weekends and 8 rounds. The event is organized by FMI – Federazione Motociclistica Italiana and CIV – Campionato Italiano Velocità.

During the 2011 season of the Italian Championship, 300 Riders and 60 teams participated in the championship including all classes – 125GP / Moto3; Superstock 600; Superstock 1000; Moto2; Supersport;
Superbike: Ten bike makers competed in the 2011 season, including the likes of Ducati, Yamaha, and Aprilia. The season was witnessed by 70,000 race day spectators, 2.5 million TV viewers in Europe and reached 26 million readers through magazines.

To mention a few words on the first Indian team – Mahindra Racing Mahindra Racing is the first Indian team to participate in the MotoGP World Motorcycle Racing Championship. 2011 was the first season for the Indian factory team and Mahindra Racing signed off its debut season on a high note with action packed performances by both its riders. Rider Marcel Schrötter finished 15th overall in the 125cc Rider’s Championship and the team finished a strong third overall in the Constructor’s Championship. Mahindra Racing recorded its best result for the season at the Australian Grand Prix with riders Danny Webb and Marcel Schrötter finishing 10th and 11th respectively. The season saw three more double point results by the 2 riders at the Aragon, Brno and Assen rounds. At the Assen GP in June, Marcel also achieved his personal best, finishing with a fine 9th place.

It is indeed a greta moment to see an Indian rider racing for an Indian team. Let’s wait to get to see his enthralling performance in the coming races.